The I.F.I. Open Day is Almost Upon Us – Check Out What Free Films Are On This Year

The IFI is holding its annual Open Day on Saturday June 20th with an expanded line-up of free movies running from 1pm to 1am. As well as the free movies, and the customary barbecue in the courtyard and special discount on annual IFI membership, there are also some new attractions. 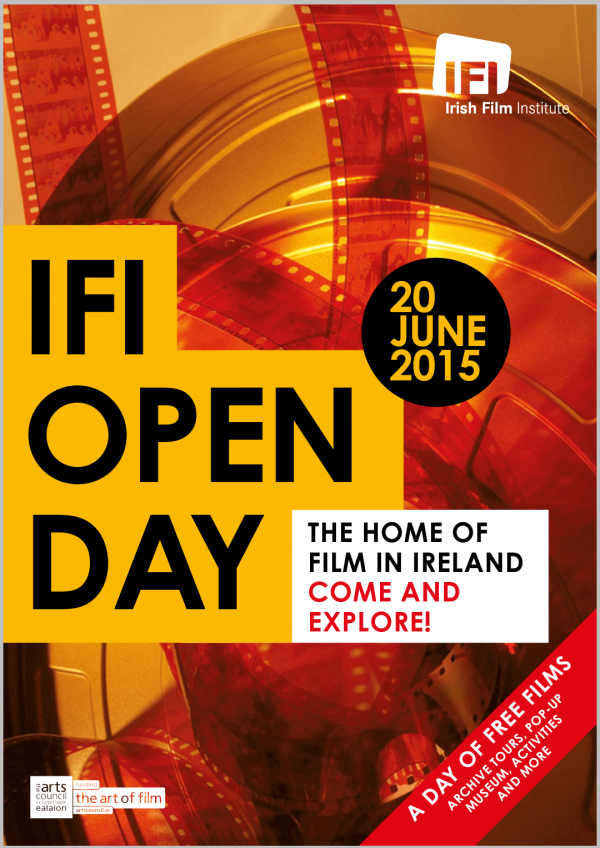 The Tiernan McBride library will host a pop-up museum of cinema equipment, a pop-up picture house showing films from the vaults, and tours of the vault at 11.30, 14.30, and 16.30. The tours have limited places, which can be booked at [email protected], as well as tours at 14.00, 15.00, 16.30, and 17.00 which bring you behind the theatre to see the projectionist at work; handling anything from digital, 16mm, and 35mm, up to 70mm – the IFI being the only cinema in the country that can run 70mm reels. And for younger cinephiles, at 12.00 artist Laura Healy will facilitate a ‘build your own time machine’ workshop. Places are limited, and must be pre-booked, and feature the option of family tickets for Back to the Future.

But what are the free movies? Well, here is HeadStuff’s guide to the 15 films being shown in Temple Bar this year.

Winner of the first Oscar for Best Picture, William Wellman’s silent epic arguably also provided the romantic storyline for Pearl Harbour. Jack (Charles Rogers) and David (Richard Arlen) are both in love with Mary (Clara Bow). When they continue their rivalry in the Air Service, Mary enlists as an ambulance driver. Gary Cooper appears in a star-making cameo, while Wellman’s direction displays his first-hand knowledge of aerial dogfights.

“This is the West, sir. When the legend becomes fact, print the legend.” John Ford’s gritty 1962 Western sees Jimmy Stewart’s Senator Stoddard revisit his past when burying old friend Doniphon (John Wayne). Stoddard, as a young idealistic attorney, tried to tackle Lee Marvin’s titular thug with legal sanctions, rather than Doniphon’s gun, but it was violent action that kick-started Stoddard’s political career…

Shown unlicensed in England in 1973, director Marco Ferreri’s licentious film sees Marcello Mastroianni, Michel Piccoli, Phillipe Noiret, and Ugo Tognazzi (all playing characters with their own first names) convene at Phillipe’s villa to eat themselves to death. Over the weekend they decide to also indulge in women, including Andrea Ferreol’s teacher. Luis Buñuel is the obvious reference point for this lengthy satirical essay on affluenza.

Catherine Deneuve and her real-life older sister Françoise Dorleac star as twins Delphine and Solange in director Jacques Demy’s homage to American musicals. They dream of escape from Rochefort, but poet Maxence (Jacques Perrin) and musician Simon (Michel Piccoli) might change their minds; if only the lonely characters who pass through one cafe could ever meet. Gene Kelly co-stars, and choreographed the spectacular musical numbers.

Alfred (Albert Finney), a bus conductor in 1960s Dublin, recites poetry to his customers, is active in amateur drama, and suffers through blind dates arranged by sister Lily (Brenda Fricker), while hiding his homosexuality. But Adele (Tara Fitzgerald) inspires him to stage Wilde’s lurid Salomé, cue controversy. This is best remembered for Finney’s bloody awful Irish accent, despite a strong cast including Michael Gambon.

Director Alice Rohrwacher won the Grand Prix at Cannes in 2014 for this curious tale of a beekeeping family thrust into the media spotlight. Gelsomina (Maria Alexandra Lungu) at 12 is the eldest daughter and already anointed heir of Wolfgang (Sam Louwyck). But her head is turned by an encounter with Milly Catena (Monica Bellucci), an actress who hosts a TV talent show. Has Wolfgang lost Gelsomina?

IFI staff have picked their favourites screened there since the last Open Day. You can vote HERE until midnight on June 12th. Previous winners by acclaim have included Short Term 12, Good Vibrations, and Submarine. The 10 films vying for your vote, from American indies to Japanese animation, are listed separately below.

The IFI is screening everything Wellesian you can imagine to celebrate Orson Welles’ centenary, and this is his final completed film; one which he claimed was the first true innovation he’d made in the medium since Citizen Kane. Purportedly a straightforward documentary about Clifford Irving’s fake Howard Hughes autobiography and a famous art forgery, this 1973 work playfully toys with documentary conventions and narrative structure itself.

Director David Gordon Green continues his move away from stoner comedies by reining in Al Pacino’s histrionics. Pacino is a lonely locksmith, haunted by the one who got away. Estranged from his son (Chris Messina), he cares for his cat and shoots the breeze with Gary (Harmony Korine); who he coached in baseball. And then kindly bank-teller Dawn (Holly Hunter) starts to inveigle her way into his life…

Kevin Smith’s retirement abruptly ends as he directs this horror-comedy in which podcaster Wallace (Justin Long) is kidnapped in Manitoba by madman Howard Howe (Michael Parks), who sets about some amateur surgery to make Wallace resemble a walrus. Can Wallace’s girlfriend Ally (Genesis Rodriguez) and brother Teddy (Haley Joel Osment) find him before he’s no longer Wallace? And will eccentric ex-cop Guy (Johnny Depp) help or hinder them?

Before film comedies became running through the motions of a prefabricated plot with tidy character arcs and the occasional joke, the Pythons effectively bundled together endlessly quoted sketches like ‘Roman Grammar’, ‘What Have the Romans Ever Done For Us?’ and ‘Always Look on the Bright Side of Life’ inside a ramshackle narrative in which Graham Chapman’s hapless Brian keeps getting mistaken for the Messiah.

“I think you’re going to need a bigger boat…” 40 years to the day that a studio decided to go for the gusto with a troubled production by opening it in unprecedented wide release, Jaws will return to the big screen. The gamble paid off because of Steven Spielberg’s bravura direction, and the cantankerous chemistry of Roy Scheider, Richard Dreyfuss, and Robert Shaw as Amity Island’s fearless shark-killers.

Alejandro Gonzalez Inarritu’s ‘one-take’ comedy of backstage dramatics, Birdman, is powered by Michael Keaton’s meta-textual comeback as a washed-up superhero actor attempting to prove his acting chops with the help/hindrance of Broadway legend Ed Norton. Director Richard Linklater’s time-lapse wonder Boyhood follows the growth to manhood of Ellar Coltrane with warmth and much serious comedy as his divorced parents Patricia Arquette and Ethan Hawke undergo their own parallel maturing process. Parks and Recreation actress Jenny Slate makes quite an impression as an abrasively truthful stand-up comedian in Gillian Robespierre’s directorial debut Obvious Child which mixes abortion politicking, rom-com subversion, and stand-up routines in equal measures. JK Simmons (in J Jonah Jameson over-drive) is the teacher pushing Miles Tellers’ student to be the best jazz drummer he can be in Whiplash, Damien Chazelle’s drama about ambition at an elite music academy. Donal Foreman’s Out Of Here stars Fionn Walton, Annabell Rickerby, and rising star Aoife Duffin in a tale of returned emigrant Ciaran, who returns after a year to a Dublin that has left him behind.

Writer/director Pawel Pawelkowski’s deeply personal film, Ida, follows a would-be nun (Agata Trzebuchowska) in 1960s Poland as she uncovers her family’s tragic past under Nazi occupation. Shot in stark black and white, this is powerful. Tragicomically co-opted by Putin as Russia’s official Oscar entry, Leviathan, Andrey Zvyagintsev’s epic of political corruption in a small coastal town is a satire that links up with a tradition of Russian kvetching since Gogol. An over-exposed Heloise Godet and Kamel Abdeli are illicit lovers in Jean-Luc Godard’s deliberately incoherent Goodbye to Language. Godard manages to use 3-D innovatively (and head-splittingly) as he projects a different image to each eye. The Tale of the Princess Kaguya is the swansong of animation director Isao Takahata, best known for 1988 WWII weepie Grave of the Fireflies, and is a traditional Japanese folk-tale rendered in deceptively simple animation. Two Days, One Night sees the Dardenne Brothers work with their biggest star yet as Marion Cotillard plays a Belgian woman forced to beg her co-workers to forego their bonuses in favour of her job.

Vote here for your choice.

So, those are the films, but that’s only the beginning… Navigating the logistics of IFI Open Day can be like playing a game of three-dimensional chess with Mr Spock. There are now five sets of films instead of the traditional four, but you can still only get four tickets, which means that one person queuing alone can no longer get to see one film from each set. Trying to do four films was an endurance marathon at the best of times, but to get into five films is surely beyond anyone, and yet undoubtedly somebody will try. But they’ll have to sort out their strategy with someone else. Strategy is important because you can, obviously, only watch one of the three films running at any given time, but the film you choose from each set can determine what films are open to you later on. Choose Nashville from the first set of films, and its 160 minutes knock out seeing anything but Forbidden Planet from the second set of films.

And if you’re confident you can make a quick-change from Forbidden Planet to Les Demoiselles de Rochefort just remember that you’ll have to leave one screen and join a queue for another, that nothing in Dublin has ever started on time, and that one speaker will always get carried away with their enthusiasm when lengthily introducing a film. If you’re happy that you’ve picked out a sensible cinematic path through the day, beware. Some films will be gone within twenty minutes, and then some films (not looking at Purple Rose of Cairo last year) will unexpectedly still have tickets available 20 minutes before the start. Figuring out which films will fall into which category is impossible, but it’s slightly easier to try and guess which films will be on which screens; except when it’s not – audience winners Good Vibrations and Short Term 12 did not make it to Screen 1, but Submarine did. When a sell-out destroys your plan, ensure you have a plan B cognisant of run-times and queuing. And maybe a plan C…

Tickets are allocated on a first come first served basis from 11am on Saturday June 20th, and there’s a maximum of 4 tickets per person.

The Romantics |1| William Blake (The Hipster)

I Know That Face | Interview with Chiara Viale, writer-director of The New Music