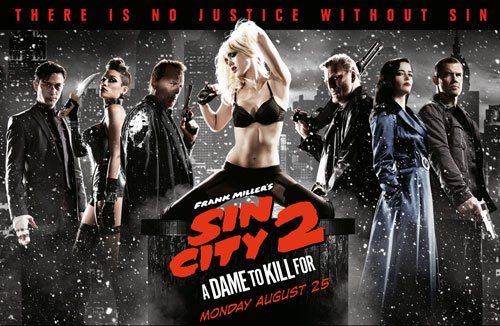 It’s been almost a decade since the original ‘Sin City‘ showed us all a comic book adaptation that, whatever else, managed to meld its source material’s aesthetic to that of movies. At the time it was something that felt decidedly new.  Since then Obama’s been elected twice, the world economy has gone to shit and several movies (300, The Spirit) have adopted the same visual style as the 2005 effort.

The story here is (mostly) a prequel so we see many characters that didn’t make it out alive last time. It’s also got one hell of an A-list cast. There’s a little bit of fun to be had and many sequences look gorgeous, or rather they look the exact same as they did ten years ago.

The runtime is spread over a few loosely related strands. Some of them don’t really come together here in any satisfying way. This isn’t helped by an awful lot of completely redundant dialogue. We’ll see a character get punched in the face. Voiceover will tell us that their face hurts. For a film that spends so much time crafting every frame there are parts of the script that really seem to be on autopilot. The overall impression is that you’re hearing and seeing things you don’t need to in a story that is unnecessary. 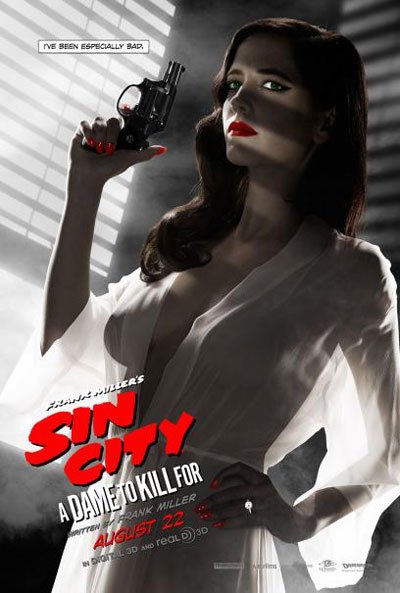 It’s worth mentioning that the full title is ‘Sin City: A Dame to Kill For‘. The misogyny will (hopefully?) turn a lot of viewers off. The men are goodies and baddies. Some are handsome, some ugly. Some use wits, some wealth, and some use brawn to get what they want. Every woman in this, however, is a lovingly stylised wank fantasy and the ladies with any significant screen time manipulate men into doing their bidding using vagina hypnosis. It’s all the most troubling elements of the Femme Fatale trope brought front and centre.

You can choose to leave all that aside. If you’ve ever listened to Frank Miller’s political opinions you’ll already know that the guy is batshit. It’s unlikely that in another ten years we’ll have Sin City 3: The Bechdel Test Massacre. The main problem is that in 2005 people were willing to forgive the original’s lack of depth since it looked stunning enough to warrant praise. Back then Babyshambles and Bertie Ahern were praised too though. This is just so boring, even with a 102 minute run time. The plots are new but this feels like exactly the same movie.

In fact, male readers can replicate the experience of this movie by watching the first one while sporadically checking an ex-girlfriend’s Facebook and muttering ‘Fucking Bitch’ under your breath.

So it’s sexist. It looks cool. There’s no tension- but it looks cool. The dialogue is largely awful. It looks kinda cool, though. After getting used to seeing a story told in such a pretty way you begin to see through it to the ugly, hollow pointlessness at its core.