‘You know hope is a mistake’ Max grumbles. His words not only convey the confusion and pain of a man living in a world that is dead, but are also good counsel for any of us delusional enough to believe Mad Max: Fury Road could nab the best picture oscar on Sunday. But it should, and for so many reasons. Because it’s a masterpiece of action cinema, because it’s beautiful, because it has genuinely powerful and subversive themes, because it has tight and dramatic storytelling with surprising emotional depth, because… bah! Instead of listing the reasons it should win it’s easier to list the one reason it won’t: because Hollywood doesn’t consider action cinema to be art.

It doesn’t matter though – in 20 years time when the memories of the other films have been pruned away, this is the film that you’ll remember from 2015. Just like Nux the War-Boy learns in the film, Mad Max: Fury Road doesn’t need the approval of an old and corrupt patriarchal power to achieve glory, it will ride eternal through the gates of Valhalla on its own terms.

There have been many hyperbolic statements about Mad Max, so I’ll just add my own: it’s hands down the greatest action film since The Matrix. And think about that for a second – isn’t that a little bit sad? What the hell happened to action in the past 16 years? The Superhero Age has brought the biggest budgets in history to action cinema, but little or no innovation with regards the action scenes themselves. You can remember the Marvel movie wisecracks, but can you remember any spellbinding action scenes? The ones that are there are functional – they do a great job of showcasing the superhero, but aren’t particularly thrilling, engaging, creatively directed, or dramatic.

And I think ‘dramatic’ is the key word here because that, even more than the brilliant craft and pacing, is what elevates Mad Max’s action. This is not a film where action scenes happen to characters, this is a movie where characters make action happen to get what they want. Every character has strong motivations – Max wants to escape, Nux wants a glorious death, Joe wants his property back, Furiosa wants to get her cargo to safety, The Brides want to be free – and these motivations drive the plot forward relentlessly, giving rise to high stakes action scenes that the viewer is invested in. When Max first meets Furiosa, we see how every characters’ need is clearly identified – the Brides, Furiosa, Max, Nux – and how the direction balances all four motivations to create tense action:

I’ve seen this film 3 times now, and on the third watch the thing that hit me the hardest was how emotional the film is. In essence the film asks ‘if the world died and you were left in the wasteland, how could you find meaning?’ and the three broken people at the centre of the film are all scrambling through their own answer. Max is haunted by the people he’s failed and left for dead, and intent on merely surviving. Furiosa has endured a lifetime of slavery and wants redemption, by becoming a hero to Joe’s sex slaves. Nux is a war-boy, a disposable soldier who’s been taught that violent self-sacrifice is the sole reason for his existence. By the end of the film they’ll have gotten exactly what they wanted, but in a completely different way. Nux is shown affection for the first time in his life by a bride, and ends up sacrificing himself against the army that indoctrinated him. Furiosa discovers the potential to be an even greater hero, but by facing up to the tyrant who stole her life rather than run from him. And Max  – we often see the faces of those he let down flash up on the screen, but the final image we see is the face of someone he saved: Furiosa, rising up victorious in front of him. He not only survived, but he’s regained a little piece of his soul too.

Another refreshing thing about the film: it trusts you. The film is odds on favourite to pick up an oscar for its richly detailed post-apocalyptic world, but it never spoon-feeds the audience exposition of these world-elements. It would’ve been very easy to put in a scene of a ‘new guy’ being led around, told things like ‘And here’s where Joe keeps his brides, oh you gotta see ‘em’. A less confident film wouldn’t have let the trucks leave that compound until you knew everything about Joe’s world, had an inkling about Furiosa’s secret plan, and for good measure seen a flashback to show how she lost her arm. Instead, you know everything you need to know to follow the plot – a truck is going to Gas-town and starts going the wrong way, disobeying a powerful tyrant.

In this film we don’t get explanations. We see things and we join the dots ourselves. When a War-boy sprays chrome paint on his mouth and makes a kamikaze leap onto a car, no-one tells us this is a ritual they’ve been groomed for, the film lets us conclude that ourselves. The success of Mad Max and Inside Out this year has shown just how smart audiences can be – how they can absorb complex worlds and rules if the main narrative guiding them through it is clear.

Furiosa is an incredibly strong woman, a hero to match Max, but the film never makes a big deal of this. There’s no goofy moment where someone says ‘You’re driving the rig? A woman?’ and she socks him one and sends him out the door. That really, really would happen in most films. It handles the ideas of gender and patriarchy the same way it does world building – immerse, don’t explain. We’re immersed in a band of women fleeing a terrible patriarch, who is very literally on the warpath to reclaim their wombs as his rightful property, and their righteous indignation is the strongest emotion pumping through the film, so it’s the one which we want to see resolved. Rather than moralise or lecture, the film brings you on an experience of its ideas.

There’s one little moment towards the end that’s a lovely reversal – in a lot of action films the male hero is overcome by his wounds, and it’s up to a nurturing female to bring him back (think Trinity at the end of The Matrix, or any of those moments where the girl patches the guy up and he smarts at a needle-prick and she giggles/ falls for him). In the closing scenes of Mad Max, Furiosa is dying and we’re treated to a sorta ‘pieta’ in reverse. Max is the one who nurtures, and brings her back from the dead. And as he does so he can’t stop saying he’s sorry, and we see for the first time in the film that he’s scared, and that he’s humbled. Mad Max doesn’t take on gender as an afterthought, it’s woven deeply into the fabric and the experience of the film.

So damn it, I’m going to hope. And just to prove to you that I stand by my words, here’s a screen grab of a one euro bet I placed on Mad Max for Best Picture. So I’ll add that to the list – not only should Mad Max win because of its progressive ideas, brilliant and dramatic action, terrific world-building, and emotional impact, but also, and perhaps most importantly, because I’ll get a hundred and one euros if it does. 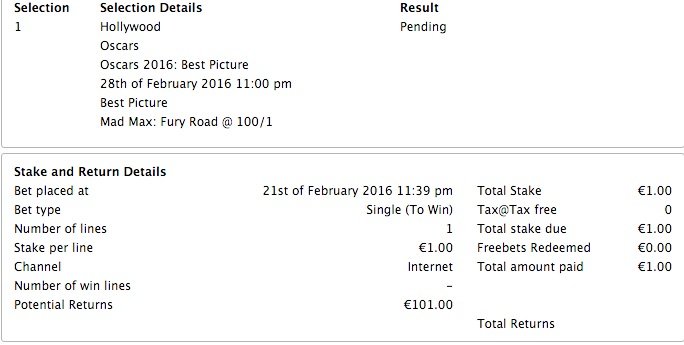 Tom Rowley is a filmmaker/writer/storyteller from Dublin. He co-runs the website and app Storymap, mapping Dublin through its people and their stories. He once buttered a bagel on the wrong side while working in a café, but other than that hes an ok fella.