Orson Welles is being feted anew for the centenary of his birth, and he even projected his personality from beyond the grave with the 2013 publication of My Lunches with Orson. Peter Biskind edited the long-neglected tapes of Welles’ weekly LA lunches with fellow director Henry Jaglom to produce a book of rip-roaring table talk. But having Welles captured on tape gives rise to an unsettling thought about his late career.

Some academics are now stressing the performative aspect of interviews. When writers give interviews, what they say in them can’t be neatly filed with what they write in letters or diaries, because an interview is a public dialogue not a private monologue, and two self-conscious performances are colliding for the sake of publicity. Indeed Welles requested that Jaglom tape their conversations for posterity, so there is undoubtedly an added dimension of self-conscious showing off on his part. There is also the further understanding that a good raconteur is not hobbled unnecessarily by facts or consistency. So Humphrey Bogart is a coward who only starts fights in places where he knows the waiters will intervene in one story, and a man of true courage and admirable integrity in another story – for the sake of the story. 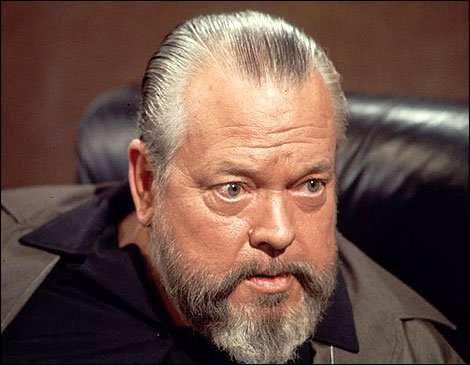 When Welles relates hilarious and outré theatre stories from 19th Century Mitteleurope you lap them up, however unlikely they may be, because you readily accept that he might’ve heard them from the actors he worked with, as good theatre legends that they’d heard. Burnishing your legend is the preserve of legends, so when Welles writes Graham Greene out of a writing credit on The Third Man, you take it with a pinch of salt and don’t make too big a deal of it. But the impulse to fact-check Welles grows with each newly discovered area of his expertise; when he claims that Napoleon was obsessed with Egypt and that the entire aesthetic of his regime was based on Egypt you raise an eyebrow, but you know answering that question would require more research than it’s worth. When he objects to a narration he’s been handed for a Louvre documentary which notes that the ancient Egyptians like all ancient religions were obsessed with death, you wonder that he is so very adamant many of the major ancient religions were not obsessed with death. But again, checking if he’s right would be more trouble than it’s worth.

But then in the final lunch conversation transcribed, Welles says something easily amenable to fact-checking:

Orson Welles: Verdi did great work when he was young. Very early. Highly acclaimed. Spent his middle years overseeing productions of his music, orchestrating his earlier work. Trivialities. Then, in old age, one day someone came and told him, ‘Wagner is dead.’ He lit up. Did his greatest work in the following years, after decades of nothing.

Henry Jaglom: Who would your Wagner be? Who would have to die to set you free?

OW: I’m not going to answer that.

Welles is wrong in every respect. Verdi lamented that he had spent ‘16 years in the galleys’ churning out operas until he was 45, and then he became publicly engaged in Italian Risorgimento politics. He wrote fewer operas thereafter, certainly, and did re-work older pieces, but he also wrote Aida while Wagner was pompously completing the Ring. Wagner died in 1883. Verdi wrote all of two operas afterwards; Otello and Falstaff, only the latter of which got good reviews. Hardly the creative liberation after the Wagnerian-inspired dry spell that Welles paints. Verdi and Wagner were both born in 1813, and in truth matched each other Rigoletto for Flying Dutchman during their most productive years, and after 1858 (the end of Verdi’s ‘galley years’) both sat on their laurels; Verdi composing only 5 more operas, Wagner 4 more.

So Welles liked to pose as a polymath. So what? He was a very well-read and well-travelled man, and if he sometimes simply made stuff up to inflate his reputation, what harm? Well… what if posing as a polymath was really accidentally playing the fool, and rendered Welles less the neglected, noble King Lear he seemed to be seeing himself as (‘A man more sinned against than sinning’), and more of a tragic, blustering Falstaff than he’d care to think? My Lunches with Orson is replete with Welles castigating people about three proposed projects: a Louvre documentary, a King Lear film, and his political thriller The Big Brass Ring. But an even more tantalising prospect appears in a late chapter – the Age of HBO beginning a decade earlier than Oz and the ‘difficult men’ paradigm, with HBO moving from the boxing and B-movie joke of a channel that Stephen King memorialised in Danse Macabre to a channel wading into the golden age of US miniseries with an Orson Welles epic about Latin American politics. Isn’t it nice to think so? Here (in lightly abridged form) is why that didn’t happen…

Orson Welles: I’ve been working on a book, and I’ve only got it in outline form, with some scenes blocked in. Henry here told me about you and your interest in a miniseries. I have two ways I can go with what I have. One is to do it as a novel, and then sell it, and let the network development system do its thing-

Susan Smith: You mean, do an injustice to the mat-

OW: Without me having anything to do with it. Because I could not stand to work under that committee system. But when I heard about you, I thought maybe I should do it directly for HBO.

SS: Tell me what you have in mind.

OW: In one sentence, it’s a miniseries set in Majorca or San Tropez, where the richest people in the world go. Or better, a dictatorship in a Central American country that is overthrown by a coup d’etat, and there is a revolution. Much of it offstage, but some of it is in the story as a background for all the things that happen to people in a kind of Acapulco-type place. There are two cities on the island. One is the port, and the other is the resort. The resort is on the Atlantic side, and the story is basically the life of a resort. The kind of people who are there range from Vesco to a presidential candidate.

SS: I’m very interested in doing something about the Dominican Republic. Because I think that it’s kind of an interesting-

OW: Because I have my own story, in my own Dominican Republic. I’ve invented my Dominican Republic. I’m not interested in real history, because I know Latin American politics to an unbelievable degree. I’m an expert on it. And you cannot tell that story using any individual country. You must combine them to do it properly, and it must be fictional.

SS: Oh, I only said Dominican Republic more than Acapulco, ‘cause-

Henry Jaglom: There’s a resort like Acapulco in the Dominican Republic.

OW: We’re not getting anywhere.

OW: I’m not gonna go on. ‘Cause if a resort doesn’t immediately interest her, it won’t, even if I go on for an hour.

OW: She doesn’t like rich people! Doesn’t want a story about rich people. That’s what doesn’t get anywhere with her, is that it?

SS: I think you should go on. I want to hear it.

HJ: Okay. Well, then maybe if she could read something…

OW: I haven’t got anything. It’ll take me six months. It just didn’t ring a bell with her, so no use talking about it.

SS: Well, it does interest me very much. I think you’re wrong.

HJ: You’re not being fair.

OW: Her eyes went dead when she heard resort.

OW: Sure they did.

HJ: You’re being too sensitive about that.

OW: I am, yes. I can’t sell a thing. Forget it. We’ll think of something else. You don’t see what a resort – You didn’t like Grand Hotel?

SS: I just want to hear the story.

OW: There isn’t a story.

HJ: Orson, there is a story.

OW: There are a lot of stories. But when I get that dead look, I’m dead! I’m lost. Because I have nowhere else to go with it. You’re the only game in town.

SS: There are a number of different alternatives. As I told you earlier, there are basically like six or seven half hour-

OW: I couldn’t work in a half hour. You didn’t tell me that.

SS: Maybe I didn’t. That’s why I’m telling you now.

OW: I thought you said that you told me.

SS: You’re not listening, because you’re so angry.

Perhaps it’s unfair to say that Welles’ need to be acknowledged as a renaissance man is solely responsible for this depressing encounter, but it plays an important part in turning it sour. And it makes you wonder – we know now about this missed opportunity because there was a tape-recorder running. But how many of Welles’ blown chances in later life played out much like this? Was the fault not with uncreative and intransigent producers, but rather with the sainted writer/director scuppering his chances by insisting on the wide range of his genius just a bit too often and too obnoxiously?

My Lunches with Orson: Conversations between Henry Jaglom and Orson Welles, edited with an introduction by Peter Biskind, is published by Metropolitan.
Feature Image Credit: lifetimetv.co.uk

Anna Leonowens, the Chameleon of Siam

Mank Review | Fincher’s Latest is All Craft and No Soul

Die Hard With A Vengeance Turns 25 | Does Anyone Care?