About a quarter of the way through this exemplary debut documentary, we are given one of the film’s trademark, free-flowing sequences. Bing Liu’s handheld camera follows the skateboarding exploits of Zack and Kerri as they manoeuvre their way through the urban sprawl of Rockford, Illinois lit only by the spectacular dawn sunshine.

As the music swells, the sound of the boards’ wheels against the pavement becomes almost cathartic before merciless cutting between tricks increases in speed, forming a sort of rhythm. The delightful sequence comes to an abrupt halt when Kerrie’s board suddenly snaps during a seemingly simple slide. Well, we knew it couldn’t last forever.

As a metaphor, it’s not exactly subtle, but it is undeniably effective. At this stage, we have already learned that the sweet-natured Kerrie Johnson, a poor black teen living in an increasingly depressed city, had suffered physical abuse at the hands of his late father for years. When the board breaks, the escapism that comes with it does too and Kerrie is dragged back to his impoverished reality. By the time the credits roll, domestic violence will have left a destructive wake in the lives of all three of the aforementioned men, filmmaker included.

Minding the Gap, one of most acclaimed documentaries of the year, is being hailed “as much more than just a skateboarding movie” but really it’s barely even that. Covering a timespan of a decade and some change, this a thorough document of the enduring trauma of abuse that puts all forms of masculinity, whether toxic or benevolent, under the microscope.

Using what amounts to hordes of amateur footage to tell three equally and deeply affecting stories, it’s one of the most extraordinary feats in the genre in recent memory. This is saying a lot considering Minding the Gap lost out at the Oscars to a film about a guy who climbed 3,000 metres of rock without any safety equipment.

One of the other key personalities we are introduced to in his late teens is Zack Mulligan. A talented skateboarder in his own right, we learn early on that he ran away from his home at 16. In direct contrast with the soft-spoken and introverted Kerrie, Zack starts out as the gregarious life-of-the-stoner-party, masking his bleak prospects through a wily grin and a passion for boarding.

We’ve all known his kind—easy to like, difficult to connect with. Zack’s girlfriend Nina is pregnant, and with the impending arrival of the baby comes with it the encroaching spectre of responsibility. The carefree era of bonding burnouts seems to be coming to an end, as Zack commits further to his unforgiving, dead-end job as a roofer.

This isn’t, however, about how growing up forces a wedge between young male friendships. Minding the Gap is more concerned about the ever-consistent, generational patterns of male violence and how it impacts both perpetrators and victims alike.

Zack and Nina’s relationship is already fraying before the child comes into the scene but it virtually capitulates in the first few months following the baby’s birth. Zack shares with Liu a phone recording of an enraged Nina screaming death threats aimed at Zack. Nina later reveals that shouting match came not long after he had been physically abusive, and she has the marks to prove it. 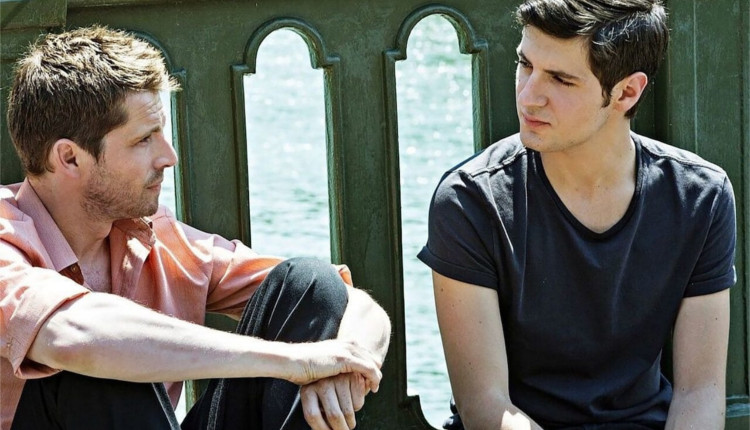 As we delve deeper into Kerrie and Zack’s lives, Liu starts to play a more a significant part in both as his personal connection to their stories is revealed. Liu himself was beaten consistently by a stepfather and this fact suddenly gives his gentle inquisitions into Zack’s behaviour a tense edge.

An interview with Liu’s mother, the woman who brought the abusive man into their home, is an absolute heart-breaker. What unfolds doesn’t provide the sense of closure perhaps even Liu knew would never come to pass. Instead, we see how abuse leaves behind it scars on the relationships between its victims which may never completely heal.

It is Zack that nonetheless represents a moral crisis that both director and audience must contend with. Liu is privy to information that if he keeps quiet, may be putting Nina and other women’s safety at risk but he’s sworn to secrecy and a confrontation may only make matters worse.

It all comes to a head in a startling riverside confession that leaves viewers with little doubt about where guilt lies. Is Zack on his way to become the kind of man that terrorized Liu and Kerrie? That’s up to the viewer but what’s certain is that the brutal cycle of male violence is going nowhere.

Minding the Gap is not 90 minutes of despair and this must be stressed. If Zack is our ethical quandary then Kerrie is the vibrant, beating heart. He is one of the great American documentary subjects and not since Hoop Dreams have we so unapologetically and passionately rooted from the side-lines.

Kerrie faces penury, a difficult home life and an impossibly complicated grief in a city that’s dead and doesn’t even know it. And yet somehow, it’s more inspiring than any marvel hero’s last minute saving of the universe. Never has an utterly thankless dish-washing job felt like such a lifeline and never has an unexpected day off brought us such vicarious joy. One of the standout moments comes in an eventual promotion that through Kerrie’s eyes is nothing short of a lottery win.

Minding The Gap refuses easy answers. Like its characters, its emotions are endlessly complex and edges a little rough. These people continue to love those who wrong them and wrong those who love them. In a positive sense, this is a movie about men, by men and maybe most importantly of all, for men. It may showcase the worst our gender has to offer, but it also shows the best it can be.

Mark Conroy is a writer for HeadStuff who mostly covers matters involving music, film and anything in between. He has a degree in English with History in UCD and is currently studying for a Masters in Journalism at Dublin College University.