What We Did On Our Holiday | review 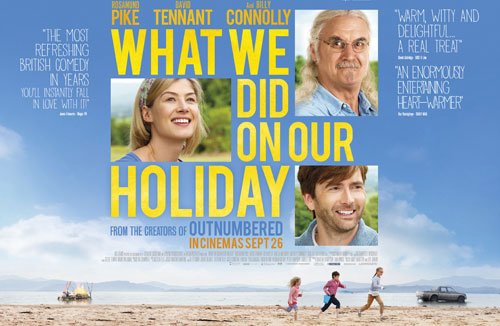 If ‘What We Did On Our Holiday‘ was a person you might laugh to humour it. If you were trapped listening to it at a get together, like. It’s inoffensive and seems like its heart is in the right place so there’s no need to be rude. Unfortunately this is a comedy with almost no laughs. Do you want to know more?

OK. David Tennant and Rosamund Pike are a separated couple visiting Tenant’s terminally ill Dad in the Scottish highlands. They explain to their TV sitcom family that they don’t want to tell granddad about their separation.

The Highlands look nice. The kids are occasionally funny but mostly annoying and the adults are solidly annoying. The exception is Billy Connolly. He channels his amiable Granddad and is used well. There’s one point where the story takes a slightly dark and absurd turn and the film looks like it might turn into something interesting. However it soon settles back into a series of annoying whisper fights and kids holding their breath and a saccharine ending.

It’s hard to be mean to such a light, fundamentally warm hearted movie but the jokes are just awful. So many fall flat. It feels like a bad UK sitcom but in a cinematic landscape and without the laugh track.

I’m not going to try to end on something pithy. Seriously, though, this is shite.