Much like with The Beatles, there exists a prevailing opinion that it is offensive, wrong and just plain stupid to criticise The Sopranos in any way, shape or form. With all due respect to a show that certainly deserves its due in terms of influence – though Oz is oddly overlooked in this regard – fuck that. Dare to criticise David Chase’s hugely acclaimed mafia drama to a crowd of onlookers and suffer derision. It’s become something of a certainty.

Strangely, the opposing argument is usually a vociferous, knee-jerk point blank disagreement minus any real spirited attempt at explaining why. You’re just wrong and that’s that. Sure, voicing such an opinion makes for a lonely hill to die on but I’m happy to prop myself up there, safe in the knowledge that I will indeed wither but happy in the belief that The Sopranos is a good show, but not a great one.

Again, it’s a contentious way of thinking. Hell, even acclaimed bestselling authors give you zero leeway when the subject comes up:

I mean, come on! Look, ‘overrated’ doesn’t mean ‘bad’. That’s an increasingly common misconception. Three out of five is, in fact, a recommendation. The Sopranos is maybe even better than such a rating, though not by much, and the sheer level of hysterical hyperbole that follows the show around is legitimately questionable. No mistake; there are several excellent moments to be found throughout its 86 episodes. Fifth entry “College” is notably engaging as it catches an increasingly beleaguered Tony Soprano attempting to juggle the duties of fatherhood and enforcing mafia tradition in darkly comic fashion.

The writing can’t resist utilising an on-the-nose quote courtesy of Nathaniel Hawthorne but then the show had a difficult relationship with subtlety in general. People rave about “Pine Barrens” and rightly so; it’s a superbly-written and performed hour, the oft-quoted highlight of which concerning Paulie’s phone signal issues and subsequent bemusement that his seemingly invincible target is apparently a highly-skilled “interior decorator”. It’s a fun, clever segment with a memorable throwaway gag, only diehard fans wanted resolution to something that really didn’t require it.

“Who gives a shit about this Russian?” asked a bemused, exasperated Chase. “We did that show! I don’t know where he is! Now we’ve got to go and figure that out?!?!”

People, usually the casual viewer type, need closure. They crave it. As such, the finale of The Sopranos proved head-scratching for so many, despite it deserving kudos for ambition and sheer ballsiness. The problem with the ambiguous conclusion wasn’t so much the nature of its information withholding, more its central player and focus of the large question mark. To put it bluntly; Tony Soprano just isn’t all that interesting.

There’s an argument to made for Hannibal Lecter as the most intriguing character in all of fiction – despite Anthony Hopkins’ best efforts to ultimately turn his most mainstream-penetrating onscreen form into a pantomime villain – and it’s primarily because he is fascinating to the very core. Though a creation born within the confines and clichés of genre fiction, he offers little in the way of answers and raises question upon question to the point that the balance of power between author and invention would ultimately shift.

Tony Soprano, on the other hand, is a pig-headed cipher, a grey void who slowly lumbers from Point A to Point A over the course of many a dull hour. The oft-debated fade to black that concludes his linear, aimless journey is the only way to bring the curtain down. It simply doesn’t matter what did or did not happen in that moment.

The Wire shows us how characters like Jimmy McNulty, Omar Little and the nuanced Stringer Bell can only change so much before the limitations of their world snap closed like a trap. The Shield delivers exceptional pathos and humanity in the form of Vic Mackey (who receives the most perfect fate imaginable for the character) and Shane Vendrell, who, infused with a gradually astonishing performance from Walton Goggins, emerges, against all odds, as the ruined beating heart of a show that offered so much more than its smash-mouth style initially suggested.

Justified‘s Raylan Givens changes just enough over the course of six seasons that his arc is, well, justified. These are flawed men but they are magnetic forces, too. Tony Soprano is a charisma void. The idea of a mob boss in therapy is an absolutely golden one but did the show really make the most of it? In the end, all they did with it was give Tony a few panic attacks, the odd fucked-up dream and zero catharsis. As for the ultimately useless Dr Melfi? Oh, rape subplot. Tremendous.

Speaking of ineffectual – we’ll take the high road and gloss over the wretched, pointless-as-fuck Carmela/Furio ‘thing’ – the foils Chase and his writing staff came up with for Tony were rather piss-poor, most of them existing only to build their foe up like they were caught in a ‘feud’ with Hulk Hogan. Joey Pantoliano’s Ralph Cifaretto was the kind of thinly-sketched maniac that pops up in every single gangster story and thus had a neon-lit expiration date but his eventual fall to Tony felt rote in the extreme. 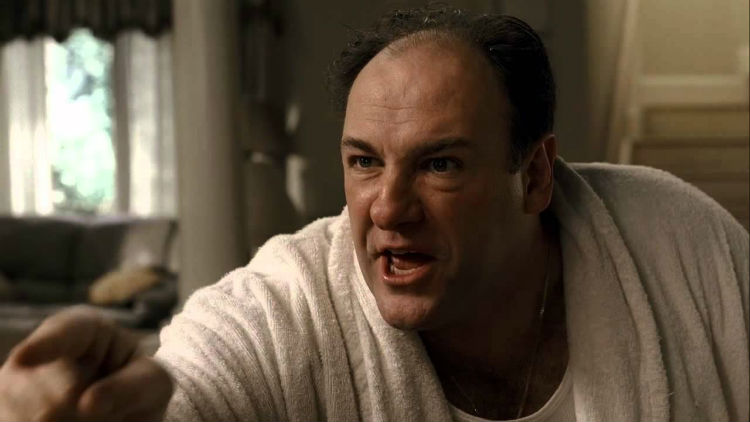 Ditto Christopher Moltisanti’s ho-hum downward spiral and convenient exit. Primary antagonist Phil Leotardo even goes out as a literal joke. As for the ongoing efforts of the FBI? Aside from facilitating poor Adriana La Cerva’s death, they may as well not have been there. And why? Why feed this lumbering oaf of a character? What makes Tony so worthy?

Like those who sport Heisenberg t-shirts, know all the lines of Scarface and cheer when Jordan Belfort folds his wife up with a hard punch at the end of The Wolf of Wall Street, people will forever miss the point. Why anyone would actively root for a one-dimensional scumbag like Tony Soprano is beyond me. Don’t misunderstand; some of the most well-told stories centre around reprehensible individuals; Glengarry Glen Ross, The Assassination of Jesse James by the Coward Robert Ford and The Shield to name but three. What’s the difference? Layers. Depth. The slightest hint of empathy.

The Sopranos knew what empathy was and honestly respected it at key times. Bobby Bacala’s grim corruption and subsequent violent dispatching is genuinely heartbreaking. Adriana’s fate is devastating, even if there exists a lingering undercurrent of ‘bitch deserved it’. These characters mattered, as did many other supporting players. Ken Leung showed more fire in a handful of scenes – to the point that the strength of his performance won him a (thankless) role on Lost – than James Gandolfini managed over the show’s entire run.

A dull lead surrounded by more attractive supports – sound familiar? It should, given long-term writer Terence Winter would go on to create Boardwalk Empire, gifting the legacy of Tony Soprano to Steve Buscemi’s Nucky Thompson; a put-upon puppet master of organised crime. Nucky, like Tony, is interesting, he’s just not that interesting. That those around them had to lick boot and/or perish so that their status could rise quickly became monotonous. Heavy lies the crown for the kind of protagonist these tales centre upon. To quote one of The Wire‘s most tragic pawns; the king stay the king. He’s got to earn that right on a consistently compelling basis, however. As such, The Sopranos is a good television show, only a fool would label it a poor one. It just isn’t a great one.