David Gordon Green’s Halloween had been hotly anticipated for quite a while now, and while it didn’t disappoint, it may not have fully lived up to the hype.

The early movements of the film don’t deliver as one would hope; introducing us to two ‘Investigative Journalists’ a.k.a podcasters played by Jefferson Hall and Rhian Rees, to somewhat lazily deliver our necessary exposition – both directly and indirectly – before introducing us to Dr. Ranbir Sartain (Haluk Bilinger) who fills in the rest. This is also our first glimpse of the modern-day Michael Myers, who is detained in a psychiatric facility and soon due to be transferred to a higher security facility.

Through the aforementioned journalists’ unsuccessful attempt at an interview, we are introduced to the highlight of the film, Laurie Strode (Jamie Lee Curtis). Over the next few scenes the film shows a Laurie who is neurotic, paranoid, prone to drinking, constantly on edge and has essentially become a ‘prepper’ and wrecked her relationships with her family. This view of Post-Traumatic Stress is often overlooked in slasher movie sequels – and will likely continue to be – as it’ll prove difficult to outdo the filmmakers and Jamie Lee Curtis’ characterisation work here.

After Michael Myers’ obligatory mid-transfer escape, we hit the lowest point of the film as Myers’ embarks on a brutal and mostly pointless killing spree, during which the film begins to feel more like a Friday the 13th or one of Rob Zombie’s Halloween reboots. A scene set in a truck-stop bathroom is particularly reminiscent of Zombie’s 2007 film. These scenes also kill off characters in what feels like an attempt at shock value, but the writers have failed to flesh out or make us care about these characters in any way, so their deaths feel flat and un-affecting.

These early scenes are also painfully heavy on fan service and re-treading of the 1978 film; for example a shot of Laurie lurking outside her granddaughter’s school just like Michael in the original, a murder scene involving a victim pinned to a wall and a sheet ghost costume, or the fact that Dr. Sartain is a copy & paste surrogate for Doctor Loomis, until a ridiculously silly, rushed and forced character twist towards the end of the film.

It’s towards the end of Michael’s initial rampage that the film rapidly picks up. As Michael wanders the streets of Haddonfield while Laurie’s granddaughter and her friends attend a Halloween ball we really start to feel the atmosphere of the Halloween season, which has always been a strong element of the previous films in the series, and successfully continues the tradition here. We see our first glimpse at the classic Michael Myers in a brilliantly tense graveyard scene and the momentum of the film only rises from there. 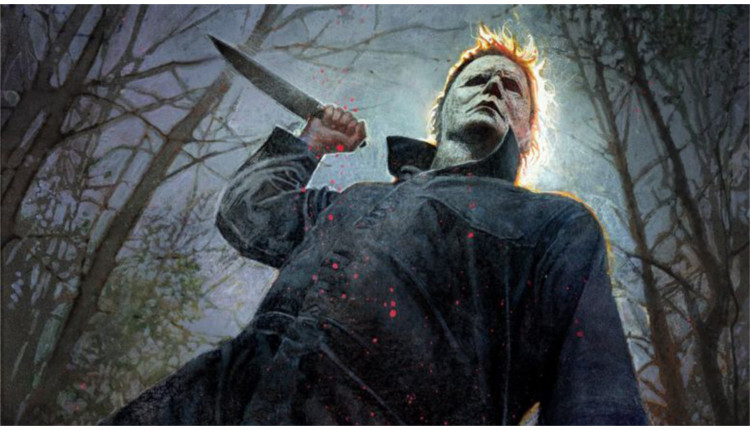 The final act delivers what fans had wanted from the film; seeing Laurie Strode in top, fighting form as the characters are trapped in a terrifying and intense siege setting. Simultaneously the script works in some affecting family moments while bringing up a new and interesting final girl(s) dynamic, as all three generations of Strode women team up to bring down the menace that’s torn their family falling apart and reconnect on an emotional level.

Despite some problems the film may have in its earlier scenes, it’s never a chore to watch. The cast are all solid throughout, with a great performance in particular from Jamie Lee Curtis. Despite the first act or so feeling a little rushed, the film remains lean in its pacing and never becomes boring, accompanied throughout by John Carpenter’s score which is absolutely phenomenal.

Overall, this is definitely worth a watch despite its flaws. It’s a (mostly) lean, fun, at times genuinely scary watch with a killer soundtrack and if you’re hoping to see a great follow up for the Laurie Strode character, you’ll get exactly that here.

Cian O'Brien is a student of English, Media and Cultural Studies at IADT. He is a passionate fan of cinema, particularly horror films, yet despite this facade of a pretentious cinephile, he would defend Stephen Sommers' Van Helsing to the grave.

I Know That Face | Interview with Corinna Faith, writer-director of The Power

I Know That Face | Barbara Steele (with Katie McGrath)