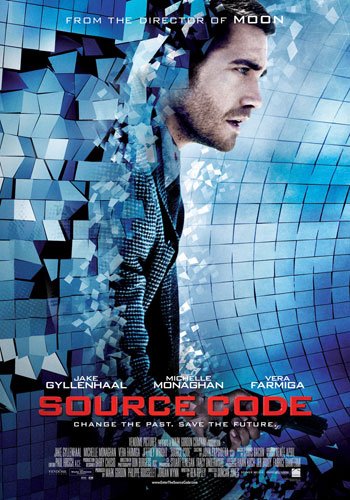 Duncan Jones (director of the fantastic Moon (2009) and son of David Bowie) directs this sci-fi version of Groundhog Day (without the funny) about a soldier (Jake Gyllenhall) repeating the same eight minutes over and over in the lead up to a terrorist attack on a commuter train in Chicago. While trying to find the bomber, Gyllenhall is also trying to figure out his own story and why he has been selected for the mission.

The first time I watched Source Code I was impressed by the visuals and the original take on the time-travel genre but I was left a bit unfulfilled by the ending. The second time round nothing much had changed. While the science and logic of the story are somewhat believable (to the open-minded science fiction fan that is), they are totally betrayed by the slightly opaque ending and it seems like the writer just didn’t know how to end the film and decided on what, in my opinion, is a cop-out of a finale that questions the whole point of the film it follows.

Gylllenhall is his usual wide-eyed, Bambi faced, square jawed, all American hero and supported by a healthy cast including Michelle Monaghan, Vera Farmiga and Jeffrey Wright who hams it up as the secretive military scientist running the Source Code programme but no matter how stylish and well executed it is, it’s seriously lacking in the charm and humour that the likes of the more recent Edge of Tomorrow executed perfectly. 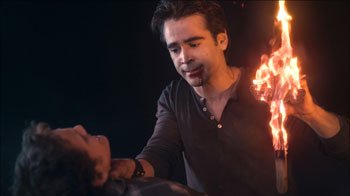 This was my Halloween night’s viewing and having not watched the original 1985 version I really had nothing to compare it to. And hence this review will not be a lament to the originals that should have been left alone. It’s true however that too many films are being unnecessarily remade in the name of cash money but I will park that for now.

Fright Night tells the story of an average American teenager (Anton Yelchin) with spots on his face and hormones in his pants who discovers that his next door neighbour (Colin Farrell) is a blood sucking vampire.

Originally was released in the cinema in 3D, and with the special effects designed with this in mind they can seem quite protracted and over the top but the film is saved by its overall style and humour which really pokes fun at the vampire genre without straight out spoofing it. David Tennant plays a hack vampire obsessed magician employed by Yelchin to help him take down the blood sucking vampire and steals the show along with Christopher Mintz-Plasse who is quickly becoming the go-to guy for the nerdy, super funny, sidekick/comic relief roles. Colin Farrell has to get a mention and plays the super slick vampire Jerry with great charisma and sexy charm. Although not being his biggest fan, I think the role suited him perfectly and it somewhat comforted my underlying fears for the new season of True Detective in which Farrell will be one of the leads. 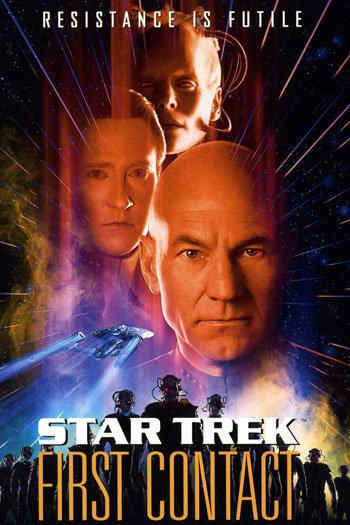 Another week, another Star Trek film. This time it is the turn of the crew of the Enterprise (in their first solo outing without the help of Kirk and co.) who travel through time back to the 21st century and battle the majestic and totally ruthless Borg who intend to destroy humanity before they can invent warp speed and engage in their trek across the stars.

Patrick Stewart, who plays Captain Picard, really stands head and shoulders above the rest of the cast, with perhaps the exception of Brent Spiner (Data), and luckily the main themes of the film surround his dealing with his most-hated enemy The Borg (clearly an allegory for the perceived ravages of socialism and the demonising outcome of collectivism and communist rule).

First Contact is probably regarded as the best of The Next Generation series of films and rightly so. The story is well-written and full of great set pieces and gives plenty of opportunity for humour and heart. The Borg are probably the coolest bad guys in the Star Trek universe and the action sequences are well thought-out and paced well throughout the film. On par with a grand cup of tea, it’s a pleasant way to pass the time.

Embracing the Infinite and Potatoes

Sky’s Brave New World | An Out of Date Tale