The Innocents, the latest from solid French director Anne Fontaine (Nathalie, Adore), is tough and uncompromising viewing, as it should be given its true-life story. Lou de Laâge plays Mathilde Beaulieu, a young French Red Cross medical student deployed in post-WWII and Soviet invasion Poland to care for the injured. When approached by a local nun, she discovers a convent filled with pregnant women, the offspring of a series of rapes by Soviet soldiers. Mathilde begins to help the nuns through their pregnancies and PTSD, putting her in conflict with the Mother Superior (Agata Kulesza, Ida), who regards the women as sinful and corrupted. 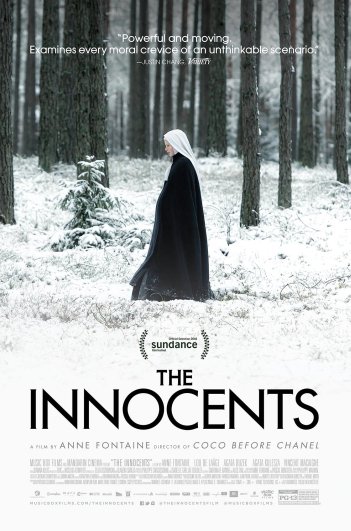 It’s a film with plenty of rich and complex themes, the two most prevalent being how violence begets violence and how faith can be both marvellous and destructive, depending upon how its interpreted. The combination of the rape of the nuns with the Mother Superior’s zealous understanding of the Bible’s teachings leads to more devastating cruelty, something which could have been easily avoidable. However, interestingly The Innocents isn’t simply an anti-religious movie. It portrays how religion is what helps the nuns, who realise that love and kindness is the touchstone of their faith, cope with their dire situation, enabling them to care for their children.

The Innocents feels far more authentic than a typical Hollywood historical drama. It isn’t just a case that the French, Polish and Russian characters all speak in their native tongues – as opposed to someone like Tom Cruise in Valkyrie. It’s more in the sense that the film doesn’t try to soften the material. The authentic setting, which at brief moments resembles a painting a la Barry Lyndon, for the most part looks genuinely war-torn. The violence isn’t gratuitous but it doesn’t shy away from portraying it in all its realistic awfulness. Even, when it appears Fontaine’s film is slipping into Hollywood cliché, e.g.  a romantic sub-plot between Mathilde and her colleague Samuel (Vincent Macaigne), it does not. Instead, the characters feel realistic and the romance is less a great love affair than a depiction of two people trying to find refuge with each other from the horrors they face every day. It’s worth noting that Macaigne’s utterly sympathetic and heart-breaking performance elevates a story-line, which is often the worst in these types of movies, into a film high-point.

At times, it can be quite infuriating to witness the head nun commit such reprehensible acts and have no one stand up to her for such a long period. That said, it’s something which reoccurs in other convent-set dramas like Philomena and perhaps is a true representation of how these women, who were led to believe they were shameful and not victims, acted. Also, the nun characters within the film tend to be indistinguishable from one another. Yet, this too could be intentional, showcasing how their personalities were stamped out by their superior in exchange for complete devout loyalty to God. However, even if these qualities of the drama do niggle at the viewer as they watch, one must admire The Innocents for being made by a woman, starring almost solely women (Samuel is the only other prominent male character) and centring upon a plight only women faced. De Laâge is wonderfully understated as the strong central heroine and the film is an intelligent drama focusing upon a dark period of history that most are unaware of.

The Innocents is in selected cinemas now.

17 | The Innocents with Peter Dunne

Film Review | Seeing and Hearing in The Chambermaid