It is a truth universally acknowledged that a manuscript in possession of Jane Austen as its author, must be in want of an adaptation.

Between the multiple film and television versions of the official canon (Pride and Prejudice, Sense and Sensibility et al), modern updates (Clueless, Bride and Prejudice), sequels (Death Comes to Pemberley), fan fiction (Pride and Prejudice and Zombies, The Jane Austen Book Club) and biographies (Becoming Jane, Miss Austen Regrets), you could be forgiven for assuming that this literary seam had been well and truly ploughed.

So when a ‘new’ Austen adaptation like Love & Friendship comes to the big screen, delivered by no less a cinematic luminary than Whit Stillman, who gave us the waspish paeans to New York society, Metropolitan and Last Days of Disco, Austen fans and film buffs alike are going to sit up and take notice.

Love & Friendship is based on Jane Austen’s early, unfinished novella Lady Susan, and stars Kate Beckinsale as the scheming Lady Susan Vernon, a widow, who trips from country house to country house, outrunning her debts, and leaving romantic devastation in her wake. An outrageous flirt, her prime concern is to find a rich husband for herself and for her daughter, and if she can keep her married lover, on the side, so much the better. Indie film It Girl, Chloe Sevigny, plays Mrs Johnson, her American friend and confidante. 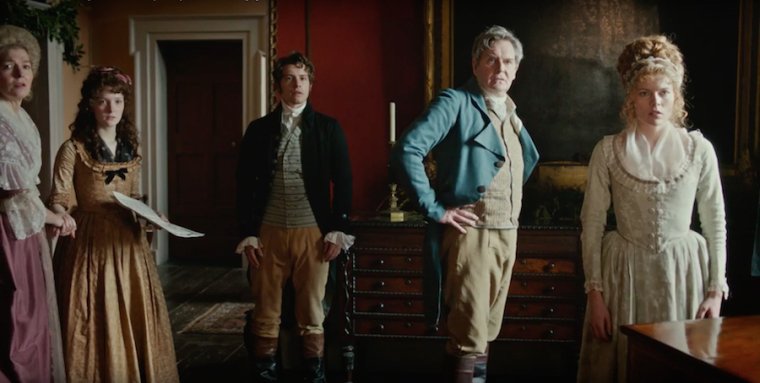 Unlike the usual Austen adaptations, the cast isn’t a Who’s Who of the British acting elite; young US actors like Xavier Samuel (The Twilight Saga: Eclipse) and Emma Greenwell (the US remake of Shameless) take the prime roles of Lady Susan’s toy-boy / would-be husband and frenemy sister-in-law, respectively. Veteran actors Gemma Redgrave, Tom Fleet and Stephen Fry, add some English stiff upper lip to the proceedings in brief, almost cameo, performances.

Described as a comedy of manners, Love & Friendship is certainly more of a romp that we’re used to seeing in Audaptations. Beckinsale delivers quips, bon mots and cutting remarks left, right and centre, and it is, without doubt, the best part she’s had in years. Given that her biggest role to date was as a latex-clad lead on a vampire / werewolf franchise (nope, not that one – the one before), this is not exactly high praise.

The Love and Friendship trailer comprises Kate Beckinsale delivering said snipes to a woman we see mostly from behind; I assumed the head belonged to some anonymous passing character. The head is, in fact, Chloe Sevigny – Beckinsale’s co-star from Stillman’s Last Days of Disco (which put them both on the map), second billed in Love & Friendship, and whose recent work includes critically-acclaimed and award-winning television like Bloodline, Big Love and Portlandia. WTF? Sevigny reduced to stooge? If I were her management, I would have had something to say about that.

So I came to the actual film with a sense of unease, of something amiss, a thought that quickly took root. In the opening minutes, we’re introduced to a bewildering array of characters, in the manner of the dramatis personae of a play. Most promptly disappear from the story, the grandeur of their introduction at odds with their importance in the ensuing action.

We’re constantly and repeatedly told what to think of characters by other characters – ‘You’re quite brilliant’ or ‘He’s very silly’ – as if the writer (Stillman) doesn’t trust his audience to be as clever as him. Tom Bennett wrings some sniggers from his witless, though forgivably rich, buffoon, but too many scenes are over-written, repetitive, with language, embellishments and reactions that don’t always ring true for the period. For example, the British upper classes don’t do openly rude, they do chillingly polite.

Love and Friendship is not without its charms: there are some sharp one-liners, more Wildean wit than Austen incisive observation; there’s a brief but refreshingly ingenuous intervention by the local vicar (Northern Irish actor, Conor MacNeill); Tom Fleet‘s Sir Reginald De Courcy snags the one true laugh out loud moment, in his reading of a letter to his wife (although the punctuation gag screams Stillman rather than Austen), and it’s always fun to play Spot-the-Irish-Film-Location.

But there are too many bum notes to be ignored. The clothing, for instance. The women are still clad in the corsets and richly, coloured silk polonaise frocks of the 1770’s and 80’s; Austen wrote Lady Susan some 15-20 years later. It’s a detail, perhaps, but with the wealth of visual material depicting this era on screen, it feels lazy. 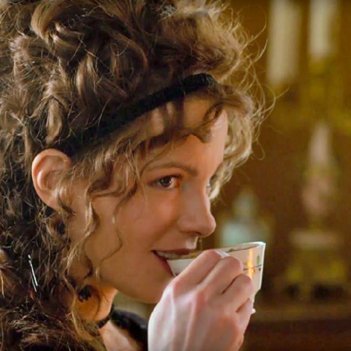 Then there’s Lady Susan, herself: amoral, scheming, manipulative narcissist who abandons her daughter to pursue her own selfish aims. Given the quick-fire delivery we’re supposed to find this hilarious and charming. These qualities do exist in Austen’s original depiction of Lady Susan, but it’s less clear whether she ever intended us to cheer for them. Laugh at them, yes, but celebrate them? Austen would give us more developed versions of this character in later works – the manipulative Fanny Dashwood, who ruthlessly culled the Dashwood sisters’ inheritance in Sense and Sensibility, the amoral Mary Crawford and adulterous Maria Bertram in Mansfield Park. None are intended to command our sympathy, much less our regard.

The original Jane Austen novella took the form of a series of forty-or-so letters between the principle characters, and was unfinished. Herein lies the film’s downfall: there simply isn’t enough detail in the source material to create a fully-rounded and believable version of Lady Susan’s world. In filling in the blanks, what ends up on screen is more Whit Stillman than Jane Austen, more New York than London or Bath. This Lady Susan Vernon would absolutely kill it as a Kardashian or a society hostess on the Upper East Side.

And that, for me, is where Love & Friendship comes undone – it is a twenty-first century sensibility masquerading as nineteenth century literature. Not nearly as clever as it would have you believe, Love & Friendship has all the bite of an Austen pastiche and none of the affection of a joyous homage.

Love & Friendship is in cinemas from Friday 27th May. Check out the trailer below.