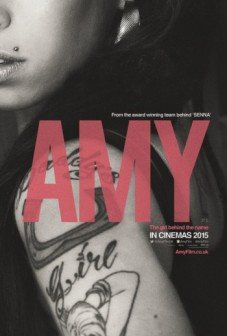 Early on, Amy, the new documentary about the life of Amy Winehouse, tries to go back to a time before her beehive was in every tabloid. We start with old home footage of a bubbly, mouthy teenager. It’s a well worn doc technique but it works. The early portion of the film reminds you how talented, vivacious and often hilarious she was. Footage of Winehouse’s reaction at being compared to Dido by and interviewer is particularly funny and provides a nice counterpoint to the inevitable slide into addiction that we know is coming.
Director Asif Kapadia uses largely the same techniques he did for the wonderful documentary Senna. The film is made up almost exclusively of old footage and photos with the voices of various interviewees (and the subject herself) played over the imagery. The technique is simple and gives this an intimate feeling. The film also chooses to highlight her talent as a lyricist by having the lyrics pop up on screen during the performance scenes like some morbid karaoke track. For those of us who were used to just merrily bopping along to her cover of ‘Valerie’ on the radio, it’s a useful reminder of just how messed up and personal her writing often was.
Given that this inevitably turns into a story about addiction and Bulimia it obviously gets very sad and very frustrating quickly. There are moments when those around her may have been able to help her but either didn’t realise or simply couldn’t. The environment she was in was not what you’d call a good support network. The film itself actually made headlines due to her family being unhappy with this portrayal. Her father in particular, Mitch, doesn’t come off well and the film portrays him in equal parts as an affable London dad, an opportunist and a man who, at times, doesn’t seem to realise the gravity of the situation. With this subject matter, the risk of hitting a raw nerve was always there but, for the most part, the film treats Amy Winehouse with empathy. One long, lingering shot of her jokily sticking out her discoloured tongue is the exception to this. It feels misjudged and cruel for the filmmakers to say ‘look at how gross her brown tongue is’.Speaking of cruelty, it’s also hard not to be infuriated by the comedians like Frankie Boyle and Jay Leno who are portrayed cracking gags at her expense at exactly the moment when her spiralling was at its worst and, therefore, at its most high profile. Seeing how vulnerable she was, this really does make you feel that they were kicking someone when they were down and being every bit as cynical as the paparazzi lying in gutters hoping to get a shot of an alcoholic coming out of a pub for us all to laugh at.
The main issue with this film is that it isn’t an amazing story. It’s a tragic one but one that feels inevitable and often horribly mundane. That’s a strength of sorts, I suppose. Even those early scenes of a talented young woman laughing with mates are used to counter the horrible end that we know is coming and perhaps all knew was coming at the time, even as every comic played to the cheap seats.
Like her music, this is something more regretful than celebratory, but there is a power in that.
Amy is in cinemas on Friday 3rd July. Check out the trailer below.
Featured image credit here
musicFilmDocumentaryFilm ReviewMovie reviewGed Murrayamyamy winehouse
Share

The Poetry Police Bring You How to Dress Like a Poet