Nowadays, with Marvel’s cinematic juggernauts regularly blowing up the box office several times a year, it’s easy to forget that there was a time when “superhero movie” meant either kiddie fare or B-movie schlock. One series that elevated the genre to its current heights was Sam Raimi’s Spider-Man trilogy. Though Spider-Man 3 left a sour taste in many people’s mouths the first two films showed that super-powered heroics plus emotional turmoil were a powerful combination. It’s not surprising that Sam Raimi took this approach, as he had already done so once back in 1990 with Darkman.

The story of Darkman’s creation shows that Spider-Man wasn’t the first superhero Raimi had his sights on. Originally he had pitched for Batman, but that franchise eventually went to Tim Burton (who released his version in 1989). He’d also gone after The Shadow, a classic pulp character, but didn’t manage to get the rights. So he decided to create his own original character which (given Raimi’s history with the Evil Dead franchise) took on a decidedly horror-tinged tone. Though Darkman takes on elements of The Shadow (most notably his slouch hat and billowing black coat) he is most reminiscent of a classic “sympathetic monster” from the horror movies of the 60s and 70s. Throw in some inspiration from David Lynch’s The Elephant Man and you have a character who is a long way from the four-colour superhero mould. 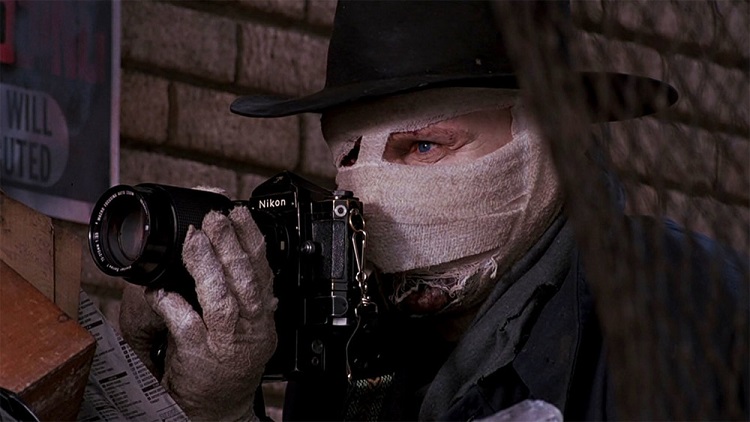 Darkman also lacks much in the way of superpowers. Left horribly burned after an attack on his lab, scientist Peyton Westlake is given a treatment that severs some of his nerves, leaving him unable to feel pain but also subject to wild mood swings and over-emotional behaviour. (It’s also implied that he has enhanced strength, though this isn’t really demonstrated in the movie.) Darkman’s real superpower is based on the research he was conducting before his accident: creating an artificial skin that not only can replicate his own (pre-accident) appearance but allows him to take on anyone else’s appearance as well. The skin has one flaw: it begins to break down after ninety-nine minutes of exposure to light – an instability that is reflected in Darkman himself, most notably in a scene where he tries to reclaim his former life by taking his girlfriend to an amusement park.

Raimi lucked out in his casting for Westlake, who was played by Liam Neeson in his first Hollywood leading role. Three years later Schindler’s List would catapult Neeson up to superstar status and well beyond the need to take roles like this. Neeson threw himself into the part whole-heartedly, bringing a raw physical emotionality that carries the key part of the film: the emotional breakdown that Westlake goes through after his accident. Towards the end of the film he tells his girlfriend Julie (played by future two-time Oscar winner, Frances McDormand) that he has become “wrong, a monster”. Thanks to his portrayal of that descent, we believe it.

What makes Darkman a superhero movie and not just a tragedy are the villains who attacked Westlake and who menace Julie. This crew are actually introduced in a pre-credits sequence long before we meet Peyton Westlake; a sequence scored to music reminiscent of classic adventure serials that lets us know this is not a film to be taken seriously. They are led by Larry Drake as Robert G Durant, an imposing man with a calm demeanour and a penchant for collecting fingers. The rest are the classic distinctive array of henchmen who become Darkman’s targets for revenge over the course of the movie. 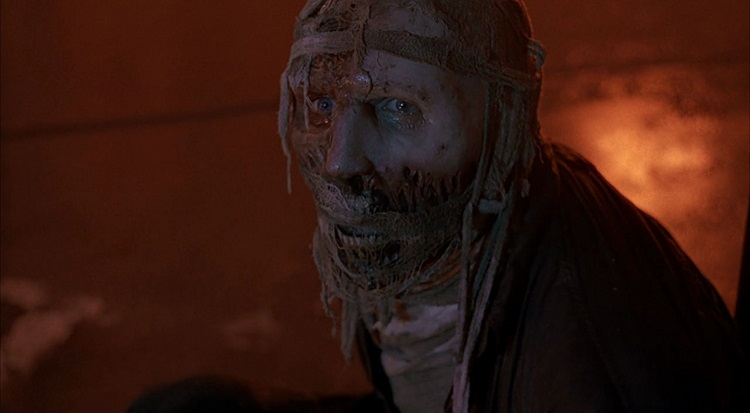 This theme of revenge ties into another cinematic ancestor of Darkman: The Abominable Doctor Phibes, where the horribly burned Vincent Price wears a mask of his own face while he takes revenge on those responsible for his wife’s death. The difference between the two is that Phibes is portrayed as a force of nature, while Raimi and Neeson are careful to show us Westlake’s emotional journey that makes him into Darkman. Even the scarring of his face (practical prosthetics that Neeson wore) seems carefully calibrated – damaged enough to evoke sympathy and some horror, but intact enough to convey deep emotion and to not be too offputting. Neeson spent a lot of time with real victims of serious burns preparing for the role in order not to portray their trauma in a cheap or demeaning way, effort that does a lot to elevate the movie above the realms of B-movie shenanigans. 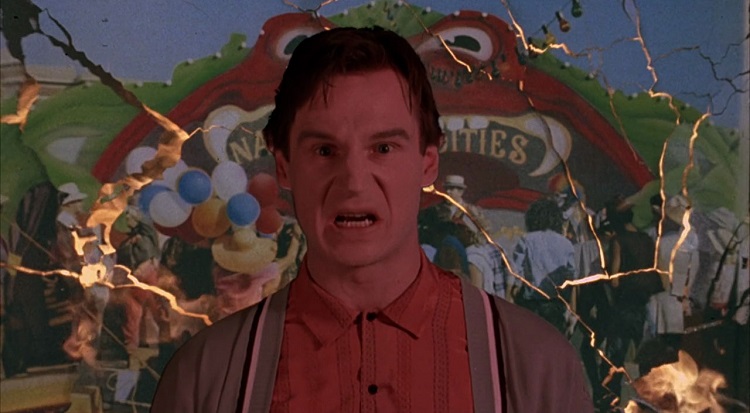 There are plenty of B-movie shenanigans on display, of course. Several of the shots would fit right in to the Evil Dead series, while non-practical effects like Westlake’s meltdown at the funfair have aged poorly. In fact, the film tested extremely poorly with audiences until Danny Elfman’s score was added, and with that tying it together it went on to become a box office success. In part this was due to capturing an audience who wanted something in the same vein as Tim Burton’s Batman but without the kid-friendly veneer, and in part it was due to an advertising campaign that was an early example of “viral marketing”: billboards asking “Who is Darkman?” And in part it was simply due to having appropriately low expectations. Four years later The Shadow would pull in around the same box office (and probably the exact same people) but be ruled a failure due to having had three times the budget.

Where the impact of Darkman can be seen most clearly in 2002’s Spider-Man (and through it the MCU) is in its emphasis on the hero’s emotional journey. Raimi’s focus is on Peter Parker as a person, and on the isolation that his “great responsibility” puts on his shoulders. That focus on an emotional core would prove key to the success of initial MCU movies like Iron Man and Captain America, and would fundamentally reshape the cinematic landscape. Darkman never lived up to the studio’s hopes of launching a franchise (beyond two forgettable straight-to-video sequels) but it did something more. It created a genre.

All images via imdb.com

I Know That Face | Interview with Rob Savage, co-writer and director of Host

Avengers: Endgame | Why I Love the Marvel Cinematic Universe