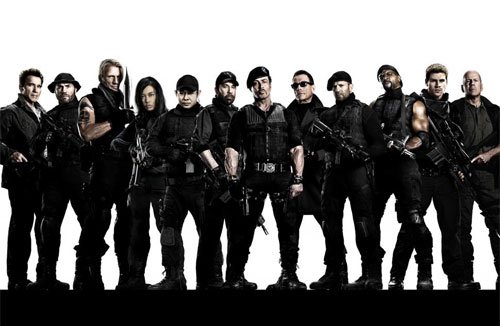 If you like action movies don’t see The Expendables 3.

The third installment of Stallone’s Expendables franchise has arrived so we can have another mash up of the bits we love from 30 year old action movies. All the way through it feels like a DJ mixing old songs together from genres they don’t actually care about but think sound cool. It’s a mess – a very long mess.

Trying to write coherently about a movie like this should be simple. I should be to the point. With this movie it’s tough. The plot sees the old gang bust Wesley Snipes out of jail. Immediately after a botched job with Mel Gibson’s baddie character Snipes along with everyone else is let go by Stallone. Sly recruits some fresh faces to take down his nemesis, to the old crew’s dismay.

As mentioned, this is actually not a great movie to go see if you like action movies. It does have explosions, it has foreign types being killed and it has lots of nonsensical one liners. It’s also, however, dragged down by a runtime of over two hours and action sequences where it’s often hard to tell what’s happening or give a flying fuck. Baddies appear from nowhere, stuff happens and edit, edit, edit, rock music.

The whole thing feels weighed down by the script trying to squeeze too much in. After a fun opening where the Expendables liberate Snipes from an armoured train (a metaphor for tax exile, clearly) we get an extended sequence setting up his character. It’s filled with daft dialogue like ‘I was knifing people when you were still sucking on your Daddie’s titties, figuring out how to use a spoon’. That’s great. That’s what I want to hear in this kind of movie and Snipes knows the kind of film he’s making. He enjoys chomping down on the scenery here, as do Arnie and Harrison Ford. Thing is, Snipes is then given nothing to do for the rest of the film. The action scenes are mostly a blur of spectacle where it’s hard to see what the stakes are but the film is at its best when it just lets people be silly and have the craic. It often takes a lot of time setting up characters that then don’t do anything much.

Interestingly I took my girlfriend to the press screening as an experiment. Without engaging in reductive gender stereotypes I don’t think this is aimed at her. She quite enjoyed it. So, if you’re a theatre attending fan of baking that doesn’t watch telly then see this.