Bigger and Better Than Ever | Dublin Comic Con 2018

Dublin Comic Con came back last weekend and while it’s hard to even fathom, the event was bigger than ever. Everything about it seemed more meticulously planned and executed than the previous years and indeed, it’s been embraced by both mainstream and hardcore geeks alike.

The cosplay was both more extravagant (an enormous Fallout mechsuit) and more beautifully specific (a gentleman dressed as Wesley Snipes’ character Simon Phoenix from the Sylvester Stallone masterpiece Demolition Ma)) than ever. Even the actual presence of comics themselves (once a notorious shortcoming of this convention) was huge this time, with homegrown talent from Rogue Comics and Lightning Strike as well as the giants of 2000AD gracing us with their presence (the sight of Judge Dredd writer Michael O’Carroll talking to a little boy dressed in an impressive homemade Dredd costume was quite lovely). 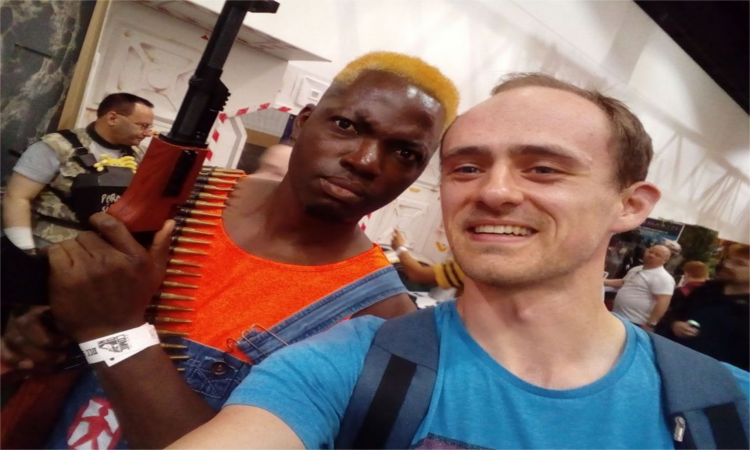 The creators of the convention admit that word of mouth was a big part in its evolution and expansion – “[it] has really set us aside from other conventions in the country and our reputation precedes us and we now get attendees from all over the world. It also helps that the guests enjoy it too and spread the word which is always nice.” While I’ll always spread the good word of DCC, I’m no longer qualified to provide a neutral review of the event, as I was just too emotionally connected to it this time, for a number of reasons.

The first reason was that I stepped up my involvement with the U.S.S. CúChulainn dramatically by volunteering at their stand, handing out flyers and encouraging people to join what it is a thoroughly feel-good fan club (particularly if you happen to like Star Trek, which I do). Much like Star Trek itself (at least one cast member a year has appeared for the past three years – this time it was Michael Dorn – or lieutenant Worf, the guy who rarely had a good idea.)

Rhe CúChulainn has been a mainstay of Dublin Comic Con, as far back as the convention’s prototypical years when it was held in Swords – back then they were little more than a stall populated by Trek cosplayers showing off their collection of toys and props. Since then, they have exploded in size (they are currently one of the largest official Star Trek fan clubs in the world) and their presence at Dublin Comic Con has become one of the highlights of the convention floor –  for they now boast a life-size, portable replica of the bridge of the starship Enterprise.

For two whole days, the ‘crew’ of the CúChulainn invited amazed patrons to pose for free photos on the bridge. For all the clichés about fan-creations being tawdry and less-than, the bridge of the CúChulainn is nothing short of breath-taking – actual, working computer screens are mounted into the console to allow users to play the starship party game ‘Artemis’ (deliriously good fun). A trapdoor reveals a projector (again, painstakingly built into the console) that projects the ‘viewscreen’ onto a fold-out projector screen. Studio lights and surround sound echoing the retro ambient sounds of a 1960s Star Trek episode complete the effect. You can practically feel Bill Shatner’s ass-groove on the leather chair.

I asked Jono, the elusive co-creator (who prefers not to use his full name) about his construction of the set – he explained that it was a total labour of love, that he and his shipmates had painstakingly retrieved scans of the original 1960s blueprints during the design process as well as duplicate ‘jelly bean’ buttons (named because that’s what they look like), and that much of his and their own money had gone into it – money that they don’t hope nor want to make back on it. I helped deconstruct the thing at the end of the con (an arduous task that took hours) and continued to be amazed by the dedication of the Cúchulainn team . Their careful disassembly of the bridge was strategically mapped out with precision. Everything had a place and everyone had a job and all anyone could talk about was the next event for the club (this weekend’s Summer party).

The other reason my heart was just too close to this particular event was that I finally got to cross paths with my ultimate childhood hero, Dean Cain. 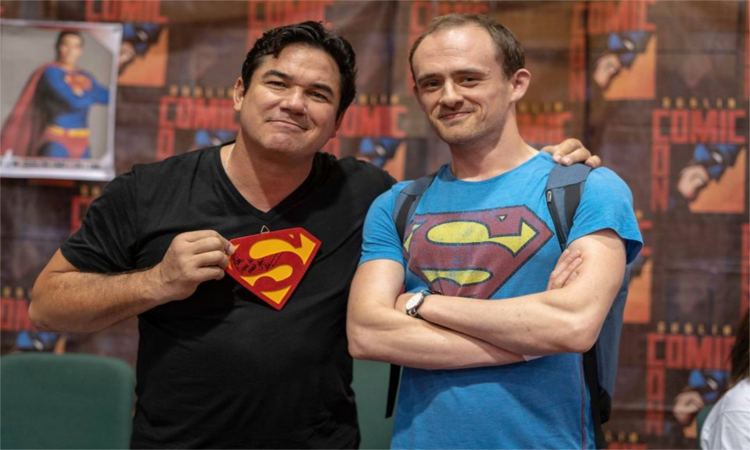 I’ve spoken at length before about my fondness for “Lois & Clark: The New Adventures of Superman”, and while I can’t deny that nostalgia plays a part in my affection for what is ultimately a kitschy 1990s family series with questionable special effects, I also have to acknowledge the enormous impact it had on my life. As I explained to the man himself, I may actually have my degree in journalism because of that series. And while Clark Kent may have been a role Cain played over twenty years ago, he still speaks of his time on the series with a spirited fondness and acknowledges that he owes much of his continued career success to that series.

In fact, Cain revealed at the convention that he is very keen to continue the series twenty years after its abrupt end on an unresolved cliffhanger: “Maybe they have a couple of kids (with fledgling superpowers), their career changes, their marriage progression, etc.” Cain went on to propose a 10-episode Netflix/Amazon/Hulu continuation series, presumably in the vein of similar long-form continuations such as Twin Peaks: The Return and the newer seasons of The X-Files. I’d watch it in a heartbeat. Moreso than the multitude of Hollywood imposters that have dared to follow in his wake, the man still embodies the gravitas of Superman.

The final reason why I can’t be entirely objective about Dublin Comic Con anymore is that while the tireless organisers have once again crafted the highlight of the Irish geek’s social calendar, while they have once again harnessed the power of phenomenal guests and immeasurable creative talent in one central Dublin location, their greatest achievement is the community they’ve created. Arguably the greatest feeling I felt while roaming the halls of the convention centre was one of familiarity – to be at home with my friends once again. Everywhere I turned, I recognised and greeted another familiar face I’d met through previous installments of this event. After a while I became stunned by how many of these people I now knew on a first-name basis and how many of them I could stop and talk to. In an era wherein fandom continues to grow ever more toxic and cynical, Dublin Comic Con proves year after year how meaningful friendships with great people can still be borne out of spaceships and silly costumes.

Believe me, I still remember that feeling of panic just a few short years ago – that I was too old for any of this silliness. That I should grow up and get a clue, get a traditional hobby, get a real job, Get a Life. I felt old. Now? Well, Captain Kirk said it best – I feel young.

Beauty and Betrayal far from Earth in Heaven Will Be Mine

Eurovision on Netflix | Will Ferrell’s Best Comedy in Years