DIFF Pix is a new initiative of the Dublin International Film Festival which creates innovative ways for Irish audiences to engage with cinema of the past. Next weekend, from Friday the 25th to Sunday the 27th of September, will see Hong Kong Kicks – a season of seminal martial arts films to be screened at the Lighthouse Cinema in Smithfield, Dublin showcasing a prime selection of martial arts movie classics produced in Hong Kong over the last few decades featuring the legendary likes of Jet Li, Jackie Chan and Bruce Lee.

Along with the film screenings there will be a martial arts demonstration by Sensei Scott Langley and Hombu Dojo Karate with thanks to Dublin City Council, to be held at the Smithfield Square on Friday afternoon. This could be the perfect way to start a weekend of brilliant martial arts action and is followed by the beginning of the screenings with Jet Li’s Once Upon A Time In China II  from director Tsui Hark.

The line-up includes classic martial arts cinema and well known masters such as Bruce Lee in The Way of the Dragon, Jackie Chan in The Young Master and Jet Li for Once Upon a Time in China II. Some of you may find gems in the action-packed Righting Wrongs or a delightful combination of horror and comedy in Spooky Encounters.

Along with the number of screenings, there will be a Q&A on Saturday with festival curator and head of the Hong Kong International Film Festival, Roger Garcia, film critic, who has been published extensively by the British Film Institute, Cahiers du Cinema, Film Comment, and Variety among others. His books include studies on Hollywood comedy; Asians in American Cinema; Asian comedies; and Asian musicals. His latest book is King Hu: In His Own Words (2013). This Q&A will follow the screening of Duel to the Death at 3pm.

The weekend promises to be full of great films and will display a tableau of film rich in cinematic history and Hong Kong culture, not to mention, duels, weaponry and wire-fu!

Check out the screening schedule below. 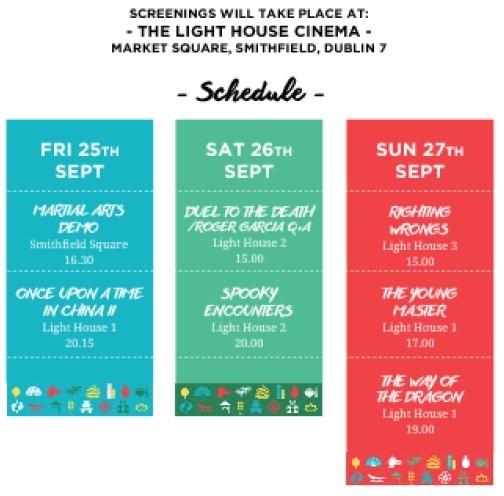 Check out the DIFF website for tickets which are on sale now. Or you can enter to win tickets here.

We will have previews of all the films over the next few days so keep an eye on HeadStuff for more details.

Hong Kong Kicks is in collaboration with The Hong Kong Economic and Trade Office in Brussels (HKETO, Brussels)

Be Cool, Hannibal Buress Is Coming To Ireland