The Czech New Wave is this insanely rich torrent of creativity that erupts in the former Czechoslovakia in the tiniest of time frames – roughly 1964-1968. It’s a mayfly of a wave, ephemeral and utterly unique. Seen from a distance it feels cut off, similar but completely different to the rest of European film in the 60’s. It’s a cinema of empathy and anarchy, combining thoughtful sensitivity with giddy energy.

However, the most comprehensive through line is just how damn boozy it is. Literally every film – be it a drama, horror, comedy or piece of experimental cinema – features characters getting incredibly wasted. While stuck in my Brooklyn apartment during the lockdown and missing the ability to go out with friends, the Czech New Wave became my surrogate drinking buddy. If you too are missing going out drinking, as I think most of us are, I would like to recommend a slate of these films to fill the gap. Watching them can even make you feel drunk. They’re also all sharp and short, coming in at 70-90 minutes.

‘Guy trying to lose his virginity’ is a tired trope, so you forget that – done right – it can be sweet, affecting and actually explore sex in a real, human, way. The Oscar-winning comedy-drama from Jirí Menzel centers on Masa, who really wants to have sex for the first time, not as a conquest, but for the simple reason that everyone else is doing it and so, as he puts it, “I don’t feel a part of the world”. Set during the Nazi occupation, he works at a train station in a small town where pretty much everyone is getting drunk and having sex – soldiers, nurses, photographers, stationmasters. It’s a world humming with desire, a world Masa can’t seem to join. 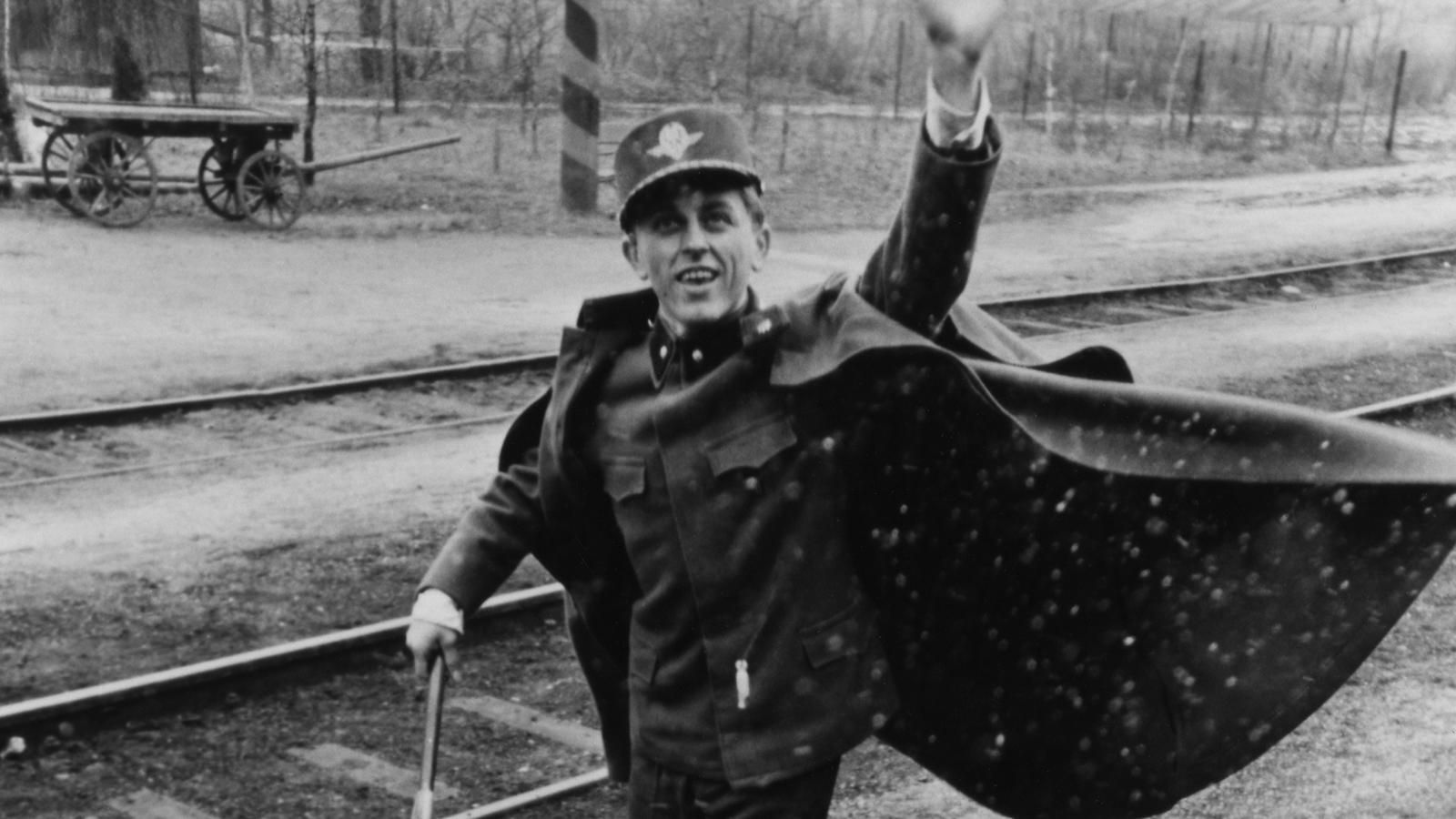 Watching Closely Watched Trains, it suddenly struck me how odd Hollywood sex is. America’s national cinema is still strangely prudish, pushing everything offscreen, or when it does happen it’s very ‘grunty’. The scenes are full of sweat and muscles, movement like pistons, a panting woman and a grunting man – fantasies of empowerment and yelping catharsis. Czech sex is a bit of a revelation, in that you suddenly see sex on screen that makes room for moments of vulnerability, giddy playfulness, messiness and kindness. And also…thirst. This is a cinema in which the women are just as sexually hungry as the men. Indeed this forms a main plot point of Loves of a Blonde in which a factory owner senses his female workers are frustrated and arranges for an army group to come visit to make them happy again.

In Closely Watched Trains, Masa’s detachment from the world takes on comic and dark undertones. A feeling that he isn’t a ‘part’ of the world makes him oblivious to bombings, moral corruption and of course those trains, the trains he is asked to watch, and what exactly it is that they’re transporting.

A bunch of oul’ lads try to put on a party in a community hall. That’s it, that’s the plot.

All they have to do is have a raffle, select a winner of a beauty pageant, and gift a ceremonial hammer to one of the firemen. It should be simple. But there’s a lovely truth revealed in comedy, that the more you try to control reality the more it will react against you. Through their infighting, nitpicking and nepotism, they manage to bungle it all and the event descends into anarchy. For some reason, watching a bunch of old guys out of their depth at party-planning is a joy to watch. It brought me right back to teenage trips to the local GAA sports hall in my hometown of Rush, and that listless boredom and disconnect from an older authority. It very much feels like a film that could and should have been made in Ireland. 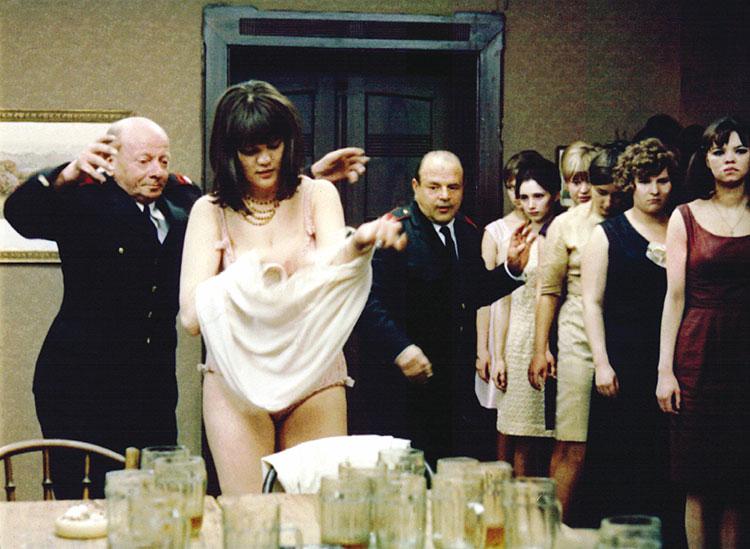 There’s a lovely story behind the film too. After the success of Loves of a Blonde, Milos Forman and his team were sent to a rural town to isolate and write a follow up. One day after work they heard about a local fireman’s ball and decided to pop in. Watching the generational tensions and the bungling officials, they were entranced, and decided the ball was a perfect vehicle to satirise their own government without them noticing. Unfortunately they did notice. Forman very narrowly avoided a prison sentence for the film.

Drunk type: Naggin in a nightclub

Vera Chytilova’s Daisies is nuts. It’s like an episode of Absolutely Fabulous put through a pop-art blender. Two young women decide that the world is bad and so they should be too. They set out to get trashed and tossed out of clubs, steal stuff, hustle old guys for food and booze and, for some reason, jump around a field like bunny rabbits. All this happens while the film cuts from colour to black & white to blue tint to red tint to trippy melting colours. At one point the women grab scissors and cut each other and then the film into little pieces – and it works! It’s a glorious, surreal, whizz-pop of a movie. Even if you don’t like experimental cinema, there’s something about the sheer ‘well fuck it why not’ energy of this movie that’s endearing. 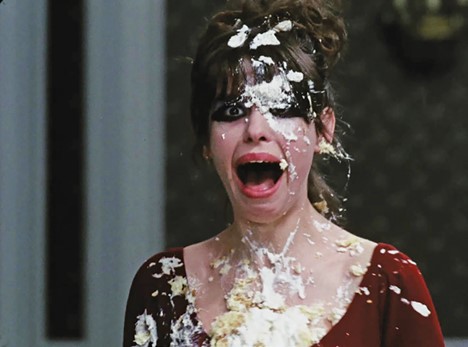 It’s a common theme that links the Czech New Wave to other 60’s cinemas – the sense of listlessness, of a young group bored by everything on offer, the provincial parochialism of it all, and yearning for one full moment. No young person in the movies has any real respect for the generation above them, and so they struggle to create a new reality through any excess on offer. Desire’s last gasp before structure takes over.

A Report on the Party and the Guests

Drunk type: Sleepy drunk/Wait what the hell is this party I’m at?

Everything feels out of joint in Jan Nemec’s eerie and uncomfortable dark comedy about power. A well-off group are drinking by the river and then, out of nowhere, an aggressively friendly man greets them with a small army waiting around him. He links arms and forces them to come with him, to play act at games. The group just feel like they shouldn’t let the mood down and keep going, as the goofy man insists at any hesitation, “Don’t you like fun?” Arbitrary rules are set and people are lynched for breaking them. It’s equal parts terrifying and strangely funny. 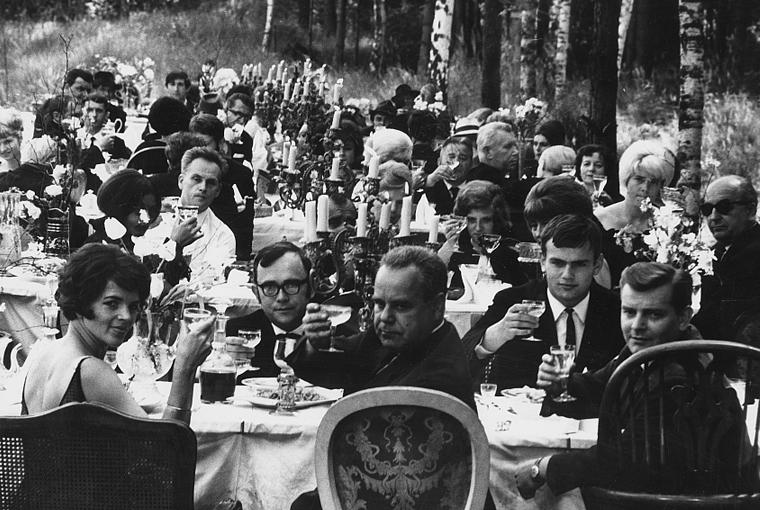 At a brisk 70 minutes, it keeps this floating sense of displacement going, where you’re engaged and confused in equal measure. It’s an impossible film to categorise because it’s so difficult to quite get a handle on. I’ve watched it five times now and I can’t say what it does. In one sense it’s a film about how petulant dictators perform like children so that others rush to soothe them, becoming morally corrupt in the process. In another sense it’s all about the role of the intellectual in propping up power, enabling its violence through empty sophistry.

Really though – just watch it for the dark and discombobulating tone.

In the pantheon of Czech drinking films this is my favourite. There’s one scene that captures the feeling of getting drunk so well, it suddenly made me think “Why doesn’t Irish cinema do this? It’s a big part of our culture and yet I can’t think of a single excellent Irish drunk scene”. 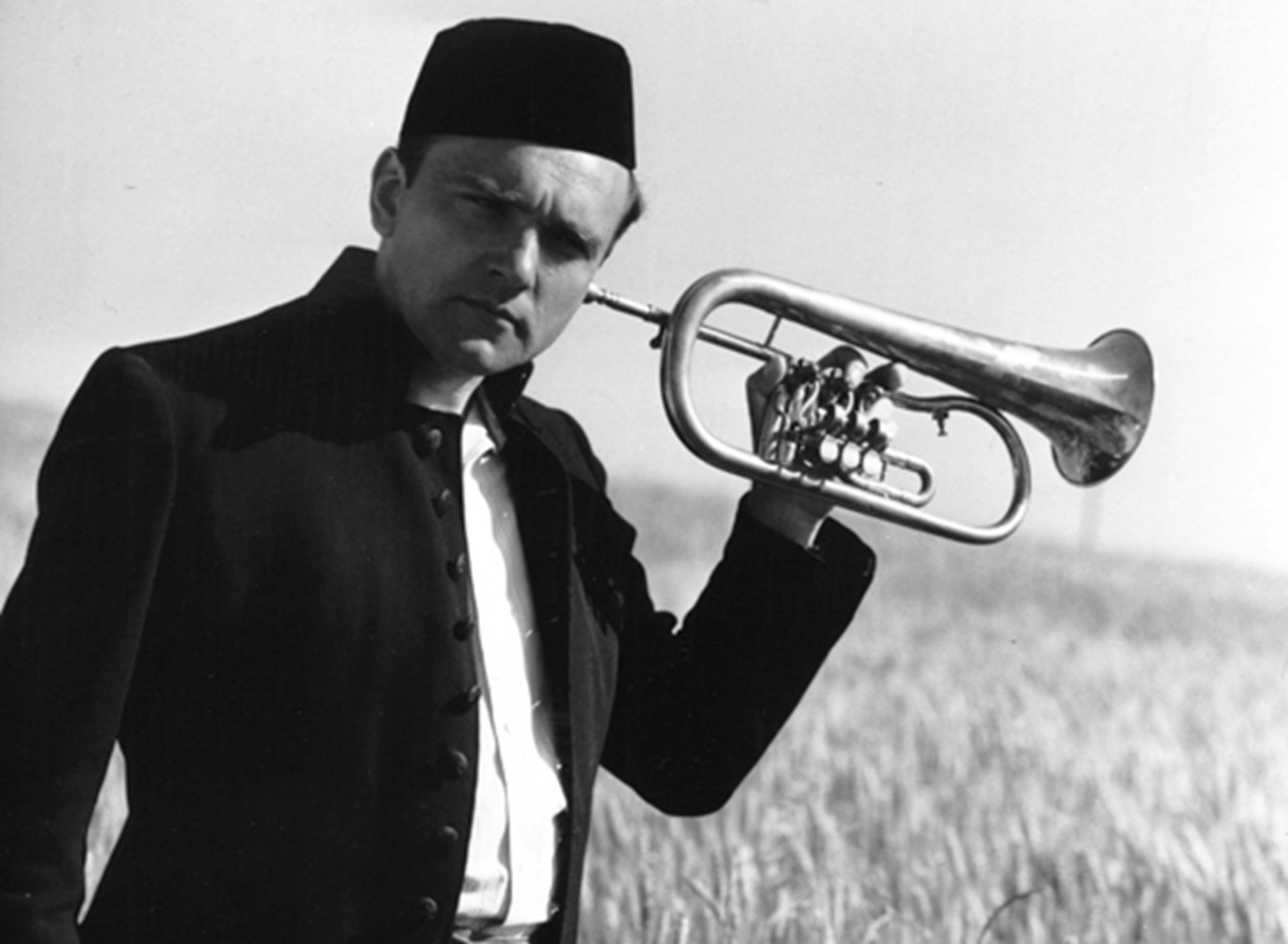 A concert pianist comes to stay with his old friend in the country, who is now a simple music teacher. Envy hangs in the air, about the one who made it and the one who didn’t. It’s a bare story, as the teacher tries to entertain his guest and his wife over a weekend. It’s really the wonder of cinema though, that with a thoughtful director a bare story can be a marvel. You feel like you’re watching reality unfold, but guided by the most observant eye in the room. The film allows its characters moments of grace, where we get an ‘in’ with each of them. It feels like a very finely crafted short story, rich in empathy. It grabs this one moment I’d never seen on screen – where old friends get drunk, and the dross of all the years falls away and they finally relate like they used to. And politeness falls away and they get giddy, and wander the house to compare the musicality of their wife’s snoring, feeling like little boys again. A magic and kind film.

Most ‘New Waves’ have a start point – the radical movie that kicks it all off – but no definite end point. With the Czech New Wave though there’s a very clear ending, captured in this gut punch of a documentary. Jan Nemec started out making a documentary on the Prague Spring, the wave of optimism for a new era of Czech liberalism. That disconnect that you sense bubbling under the other movies feels like it’s finally coming to fruition. Then, mid documentary, Soviet tanks rolled into Prague. Nemec captures his own film crew’s astonishment in real time as they see tanks appear on the streets without warning. Over the next 48 hours he catalogues the swift demise of the popular movement. It’s a captivating 30 minute film that shows the merciless speed with which History happens. 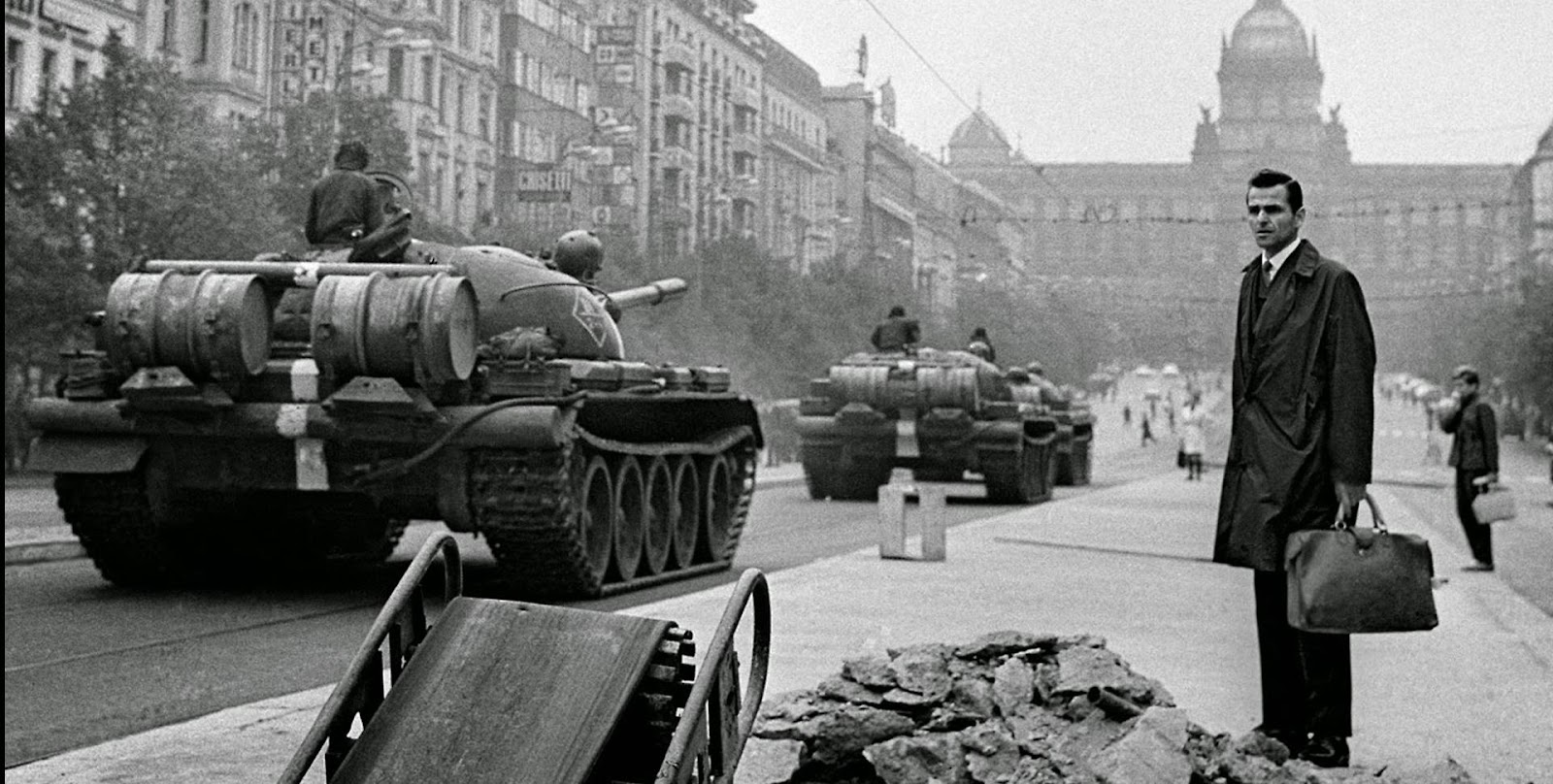 With that, the new wave comes to a harsh and abrupt halt. Only two filmmakers get out – Ivan Passer and Milos Forman drive to the border and are lucky to meet a border guard who liked Loves of a Blonde, who lets them cross. Forman comes to Hollywood for a long and celebrated career (One Flew Over the Cuckoos Nest, Amadeus, Man on the Moon) and Passer carves out a strong career as both a screenwriter and director (Cutter’s Way). This leaves everyone else and the promise of what could have been. The other new wave directors continue to make films but never with the same freedom and never with the same reach as before. The sharp ending traps those 64’-68’ films in amber – they’re crystallised promise, a burst of a moment that is then frozen – that adds a poignancy to them as a collection.

Note: This is really just the tip of the iceberg with the New Wave. There’s also the grim horror-comedy The Cremator, the wonderful paranoid surveillance drama The Ear, the shaggy dog story of Nazi collaboration The Shop on Main Street, and the ethereal Valerie and Her Week of Wonders among others.

Tom Rowley is a filmmaker/writer/storyteller from Dublin. He co-runs the website and app Storymap, mapping Dublin through its people and their stories. He once buttered a bagel on the wrong side while working in a café, but other than that hes an ok fella.

The World According To Wikipedia | Wikipedia’s Women in Red

Basically… with Stephanie Preissner | What’s The Story with the Vaccines, Luke?