I wrote several weeks ago about how the genesis of Saved by the Bell represented an uncomfortable dychotomy between the lives young people want and the lives they’re ultimately presented with. For the most part, teen dramas seem to err on the side of romanticised realism, showcasing small seemingly wholesome little towns with a sexy but troubled populace (Dawson’s Creek, One Tree Hill, Everwood). Some may say that the Anytown U.S.A. backdrop allows these shows to be more relatable, more human. Beverly Hills 90210 was not one these programmes.

Like Saved by the Bell the original 90210 was one of those weird aberrations that tried and failed to be wholly relevant and then decided it would have its cake and eat it too. The first season is very much a Family Show with Family Values and it’s clear from the opening bars of a saxophone-fuelled theme tune (so aggressively dated that they actually swapped it out on the DVD releases for the later, hipper, more metallic theme). The Walsh family have moved from Minnesota to sunny Beverly Hills to accommodate Dad’s transfer, much to the chagrin of Brandon (quintessential dude Jason Priestley) and to the delight of his twin sister Brenda (the lovably grating Shannen Doherty).The family soon experience a culture-shock as they acclimate themselves to the decidedly wilder world of Beverly Hills, where seemingly everyone is richer, more ambitious and better-looking than them, but lacking their wholesome middle-america values and dedication to the family unit. 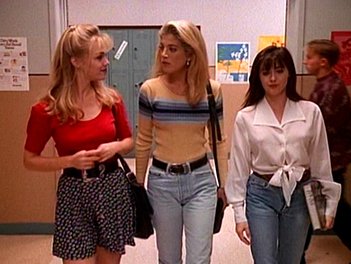 The first season was mostly comprised of self-contained stories about various teen issues and it didn’t rate very well. Nevertheless, the showrunners opted to bring it back for a Summer season utilising a more arc-driven storyline and it became a hit. Part of what drove the success of that Summer season was that the series wisely learned to stretch away from viewing everything from the perspective of the Walsh family and instead to create a soapy ensemble drama, with characters given their own share of the focus. Legends were born – Tori Spelling as the perpetual Catholic virgin Donna Martin, Jennie Garth as the stuck-up bitch with a heart of Gold Kelly Taylor, future Megan Fox husband Brian Austin Green as the hapless David Silver, Luke Perry as brooding little rich boy Dylan McKay and future Sharknado ‘star’ Ian Ziering as the hilarious Steve Sanders. The series was probably never genuinely ‘good’, it always had its foot dipped in shallow waters, but to its credit it did have noble intentions. The gang start out as a group of misfits whose rampantly inflamed egos would never allow for true friendships – slowly the Walshes chip away at their self-absorbedness until a tight bond is created between the group with the altruistic Brandon as the ‘glue’ of the group. It’s oddly believable for such a fantastical series.

Certainly it followed all of the usual tropes of the ‘Issue of the Week’ teen shows just like it – tales of eating disorders, drug addictions, teen alcoholism and teen abstinence came thick and fast, but crucially the series managed to take a group of yuppie teens without a care in the world and turn them into competent, caring middle-class social crusaders. 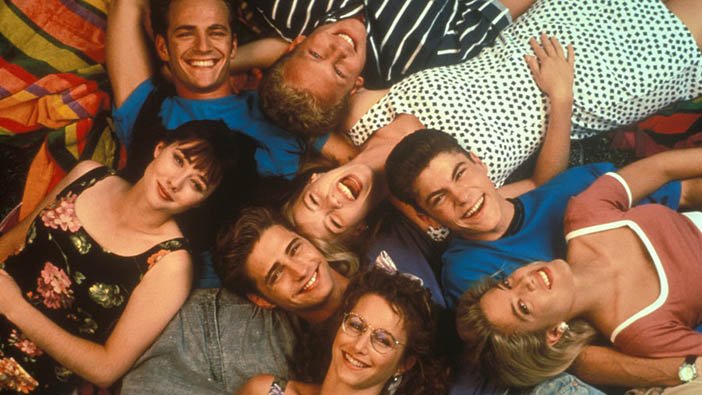 The series overall is overblown, over-acted and frequently phenomenally silly – and therein does lie a lot of its entertainment value. Brian Austin Green’s burgeoning ‘music’ career being forced into the series will induce fits of laughter previously unknown to you. There’s an episode where Dylan gets trashed on cocaine and drives his vintage porsche over the side of a mountain, only to have a dream-like near-death experience (the episode beats you over the head with its implication that it’s a battle for his soul) where he battles his dealer from within his own mind. My favourite episode is when Dylan has visions of his past life as a cowboy hustler and ‘discovers’ that Kelly is his soulmate. There’s a Christmas episode where two angels intervene to prevent the gang from being killed in a bus crash and there’s an episode that implies the existence of UFOs. On top of this, there are multiple deaths and rebirths.

90210 is important in the pantheon of teen dramas because it sort of solidified what popular culture’s understanding of what the ‘Teenager’ was for the beginning of the 1990s. Throughout the 1980s John Hughes spurred on the notion of teens as being competent young adults with ideas and identities and plans of their own for the world, constantly living in fear that this youthful exuberance would be stolen from them by the cynicism of growing old. These teenagers could drive anywhere and hang out when they liked and while they often spoke of academic and familial woes, none of those concerns ever really seemed to get in the way of their social lives. A far cry from the bleak existence of real-life teenagers, or even college students. 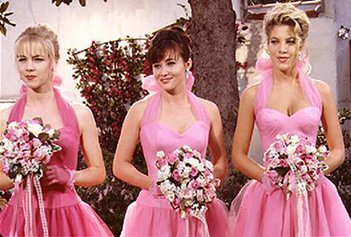 In 90210 the gang hangs out at the ‘Peach Pit’, a retro-1950s diner that specialises in fast food that never seems to make the cast gain weight (despite their constant consumption of it) and an atmosphere that recalls a simpler, idealistic era of Americana. What the ‘Peach Pit’ did was similar to what ‘The Max’ did in the decidedly more juvenile (but still very comparable) Saved by the Bell – it implied that these kids were free to live their lives as they chose, not bound by parents or finances or even hormones. This fantasy-freedom arguably justifies how much older the actors are than the characters they’re supposed to be playing. Hiring adults to play teenagers isn’t unheard of and indeed some of the casting is acceptable enough (Jason Priestley was 21 playing a 17 year old) but some of them are downright insane (Gabrielle Carteris was 30). When you’re a teenager you don’t really THINK that you’re a mess of flakey emotions, dodgy growth spurts and confused world outlooks – you believe yourself to be a totally-together dude (or dudette) who could take the world by storm if the conditions were just right.

The legacy of 90210 seems to be that every subsequent teen drama tried to not be it. Dawson’s Creek dialled back the bodacious babes in favour of the wordy, bleaker world of Capeside. Everwood and One Tree Hill followed suit. Even The O.C. with all its wealth and sunshine was still an altogether gritty show about a kid from the wrong side of the tracks taken in by a criminal defense lawyer. It would be remiss of me not to make a passing mention of the revived 90210 from a number of years ago – a pale imitation of the original, the series just didn’t have the upbeat charisma to hold my interest, the cast of characters seemed even more vacuous than their predecessors and the interpersonal relationships were dictated more by the availability of the revolving door of characters rather than actor chemistry. The original 90210 was no masterstroke, but it felt like there was a sense of loyalty or pride towards the series – this bastard child felt spat out by the necessity for brand recognition.

Of all the great, melodramatic fetishised idealisations of teenagers, none is more spectacular, more romanticised more bloody well superheroic than the adventures had by the gang of West Beverly High School. Sure, the Bayside gang had their burgers and their babes, Dawson Leary had his big words and his movie references, and sure Chad Michael Murray was good at basketball (or something?) but in Beverly Hills 90210 there were fast cars, troubled teens and broken dreams, alternate realities, past lives, soulmates and Peach Pies. To this day, I time my showers based on how long it takes me to whistle the theme tune.

The Art of a Yes Vote