‘This is a dance inspired by running, it’s not political, it’s not about war, it’s just about running’.

In Cloud Study, we track two lives as they race though time and memory to represent a journey home.

This acclaimed modern dance performance by John Scott, which sold out at the Galway Arts Festival last year, opened as a specially revised show for Smock Alley’s Boy’s School in Dublin last week.

Scott brings us on a journey from peril to hope, as two lives attempt to run 1,000 kilometres in circles and lines through space and time to craft a story about finding a home.

The show opens with Palestinian dancer Salma Ataya, she conveys fragility and fear, evolving into disturbing scenes of sexual violence and brutality. Within the first few moments of meeting her, Scott already has his audience asking questions about where she has come from and what will happen to her.

Her co-performer Mufutau Yusuf, (an Irishman, born in Nigeria), races along the gang-plank above our heads, we hear his pounding steps. He is fleeing from danger, or violence. He arrives on stage and his movement conveys mania, paranoia, fear. His body erupting into spasm, he is filled with terror. 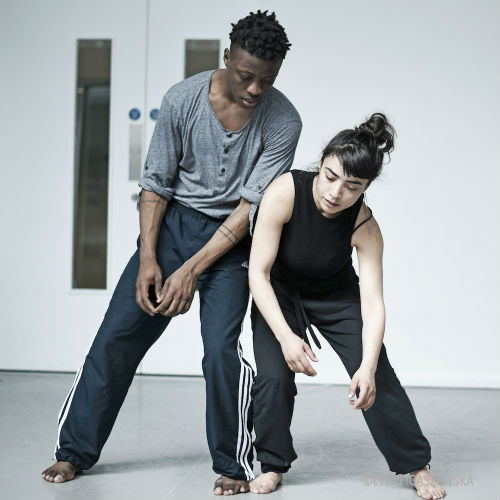 Scott strikes all of our senses, with beautiful, energetic movement, repetition and strong monologue, playing with voice and sound and weaving this together with musician Ryan Vail’s dream-like score.

Yusuf and Ataya, are exquisite, they are bold and adventurous and display both strength, vulnerability and at times lightness and humour.  Although the performers appear to represent two separate journeys, they are bound together. They are safe moving in tandem.

We see two people, lost, crossing boundaries into new space and arriving to safety. We feel hope at the end of this journey for our two exhausted travellers.

My only frustration with the performance was the choice of setting. The beautiful intimate Boys School wasn’t the right venue for such a visual and fluid spectacle, at times the movement was obscured as the dancers crouched or folded or crawled through the space. The limit of the space was not consistent with the flow of their movements. However, the lighting worked beautifully, as the dancers’ shadows were thrown against the beautiful stone wall in the space, allowing for the performance to grow and extend outside of the room.

Good story telling through contemporary dance is hard, but Scott’s universal themes home, of finding space, identity and safety, meshed with Vail’s mesmerising music, makes his message crystal clear. He has cleverly tapped into an important moment in time, as people make dangerous journeys to find a place of belonging or to escape hellish circumstances, he challenges us to ask, how do they survive?

Scott is bravely attempting to reposition modern dance in Ireland, through his challenging themes and his captivating choreography, he’s bringing a new appreciation for this medium in a country that is mostly celebrated for literary traditions and text-based drama. The work is simple, bold and theatrical, and he’s paving a path for more exciting work and a tantalising new chapter for contemporary dance in Ireland.

Blind: An Audio Horror Experience for a Socially Distanced Halloween

Cleo and the Sea