Upon arriving at Le Fringe Hairdressers on Crow Street, one is welcomed into a darkly lit salon towards a makeshift structure strewn with meter long strands of synthetic hair and guided towards a cut out face-shaped hole;  the innards of which resemble the plush interior of a coffin. 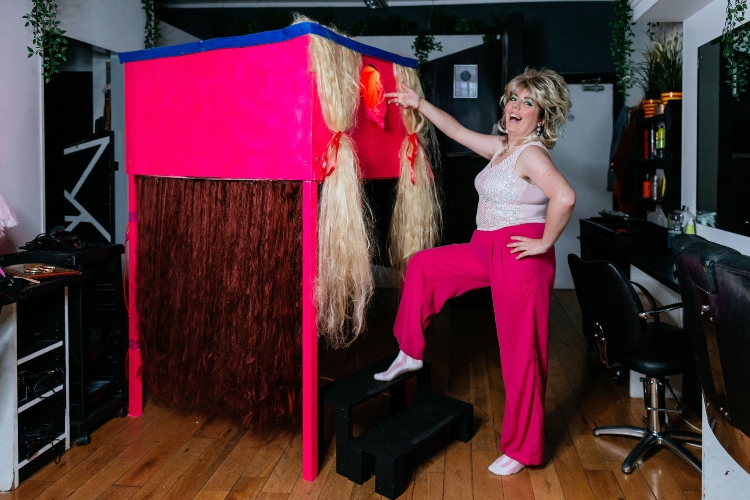 “Thank you for joining me in this here box, I do deeply and greatly appreciate it” purrs southern belle Irva Ann Dotts,  a wistful could’ve-been country musician and one of four characters Devereux portrays for the run.

>Entitled My Fringe Show, Devereux’s production is one-on-one performance art; the viewer as voyeur into her world of intrusive thoughts and collective generational anxiety all delivered with the artists trademark wit. Songs about never making it onto a ubiquitous 30-under-30-list underscore the media and societies fetishisation with productivity and youth; As a woman who has just turned 30 this year, Irva placidly remarks that she “might as well be six feet under by now.”

Listen in to Sarah on The Alison Spittle Show below:

Another song, which I’m asked to participate in, during the ten minute run, is to the melody of ‘Do-Rei-Me’ from the Sound Of Music, about keeping your cool when walking down a dark alleyway and a man approaches you, tracker mortgages and the familiar panic when reaching 30 and not knowing whether you want kids. 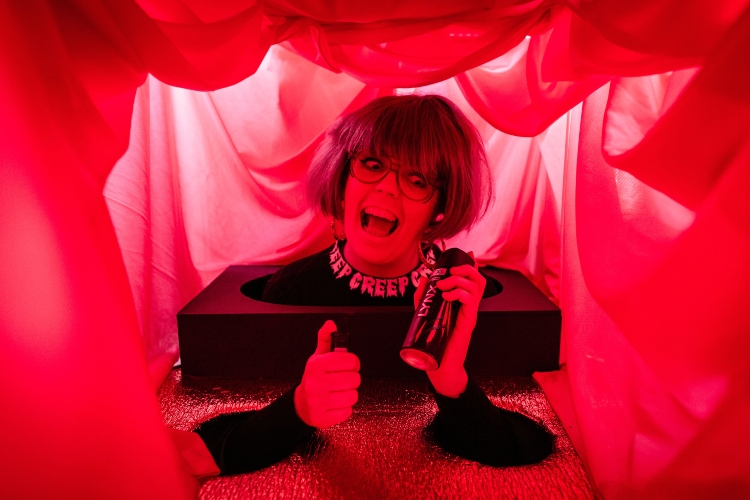 Inside this box alongside Irva, one feels an intensity similar to a stint in a confession booth but instead of being asked to be absolved, our inner anxious thoughts are let loose to hilarious effect. Wigs removed and accessories aside, the performance feels entirely self-referential, evoking similarities to the confessional performance art of Tracey Emin or the transformational, yet deeply personal aspects of the work of photographer Cindy Sherman.

All in all My Fringe Show is an incredibly unique, creative, feminist comedy that perfectly encapsulates the boundary-pushing experimental nature of Ireland’s Fringe Festival.

Stephanie Costello is everywhere and nowhere all at once. She is currently in the midst of a journalistic PhD researching transparency and media literacy in Dublin’s Institute of Technology. She moonlights as a music journalist for the likes of Hot Press Magazine and Dazed & Confused and is the derpy co-host of a political podcast - The Suss, hosted on the HeadStuff network. Heckle her at @stephcostell0 on Twitter.

“Hope is a Good Thing, Maybe the Best of Things” | The Shawshank Redemption at 25.

Tales from the Camino: A review of Miriam Needham’s Compostela