I was twelve when I finished reading The Lord of the Rings trilogy. It had taken me a year to the day and as soon I closed the cover on those adventures I cried like a five year old. I was distraught that there wasn’t more. Harry Potter had managed to flag down my somewhat fleeting attention, but in J.R.R. Tolkien’s vast legendarium I had been fully anchored, engaged, immersed. My parents, who had been glad of the peace, were equally distraught.

It was with great joy then that, after a few heavy hints (I marched him into Eason’s, took the book from the shelf, placed it in his hands, and said “James, this is the book I want.”), I received a copy of The Silmarillion

from my brother the following Christmas. I was back on the wagon. Or off it again. I’m not exactly sure how that idiom works. Regardless it was good to be reading Tolkien again. I was in for a treat.

nor The Lord of The Rings

trilogy. Set in the same universe; yes. Featuring many of the same characters; yes. The same; not at all, don’t be silly, please stop asking. The Silmarillion is the bible for any Tolkien fan. It was the obvious next step for me. 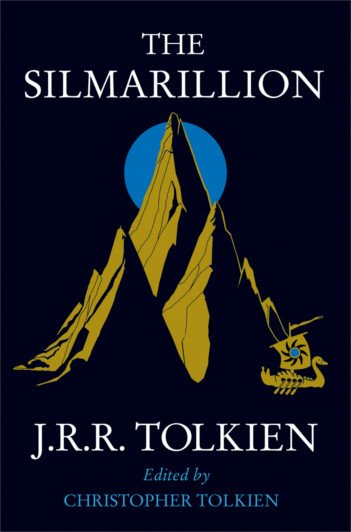 The Ainulindalë, the first chapter of the book, begins a long time ago, before time itself began as a matter of fact. It was Ilúvatar who self-realised himself from the void and began the music of the universe and from his own great and Godly operatic consciousness he wrote the melodies of the Ainur, who are in essence the first Gods. Orchestrated in song, these Ainur produced the vision of Ilúvatar, and so the universe and the earth within it were brought into being.

The Ainur would eventually move to this earth and there, known as celestial beings of the Valar, they would welcome the coming of the elves and of men. They would also have dealings with Melkor, the first and only Ainur to bring discord to the harmony of Ilúvatar, who was determined to undo all they made and whose greatest protégé, Sauron, would go on to become a very famous antagonist indeed.

The Silmarillion goes on to depict how the world of elves, men, ents, and (very importantly) hobbits, a world loved by so many, came to be. Full of dense exposition, Tolkien draws from his varied interests, which include Greek and Norse myth, the Christian bible, medieval literature, and English folklore. Dense being a key word here. Tolkien bolsters a lot of the book with his fictional legends which concern heroes of immense guile and daring as they battle Morgoth (that is Melkor’s earthly name) and fight for ownership of the three Silmarils, the greatest and most beautiful jewels ever crafted. A personal favourite of mine is Turgon, who, led by the Valar Ulmo in his dreams, founds the great hidden city of Gondolin. The tale of Beren and Lúthien also cannot go unmentioned. Although based on the Greek myth of Orpheus, Tolkien’s affection for the lovers and his somewhat more obvious basis for their romance can be read plainly on his and his wife’s shared gravestone:

Tolkien was writing what would become known as The Silmarillion many years before he was planning parties in the Shire, unexpected or otherwise. The ideas began to form during his time as a soldier in World War I where his general aim was to plan out an alternate and mythic history for England and Europe, if not the greater world. Publishers were more comfortable with the idea of relatable characters and fantasy adventure, as manifest in both The Hobbit and The Lord of the Rings, and so they were the first to garner public acclaim. The Silmarillion was published posthumously.

As a twelve year old I was fascinated by The Silmarillion. It was as if someone had written their own version of the bible, except their version was so much more interesting, and had far better character development. And wizards. As a practicing chaos magician, this last feature would go on to shape my worldview more than I could possibly imagine. Either that or I’ve entirely failed to “grow up“ in the conventional sense of the word.

Not everyone was as thrilled as I was about the publication of The Silmarillion. Compiled by Christopher Tolkien from his father’s writings, many dispute the timeline and series of events which the book detail. Christopher Tolkien has openly admitted that there may be possible discrepancies with the intention of his father seen as J.R.R. never actually compiled a manuscript for The Silmarillion. I don’t mind, though. These possible divergences from the author’s vision have led to the publication of The History of Middle-Earth

which spans an impressive twelve volumes and contains many of the contradictory drafts which J.R.R. did not live to see published, as well as Christopher Tolkien’s extensive notes on them and their place within his father’s legendarium. Nice.

I suppose what drew in my young mind was the sheer volume of allusions which Tolkien makes within The Hobbit and The Lord of the Rings. Everything has its place. The sword which Gandalf finds in The Hobbit has a name: Glamdring. A sword with a history as rich as any character, a sword used by Turgon to defend the hidden city of Gondolin from an army of Balrogs and the hordes of Morgoth, and a sword that would later, in the hands of the Grey Pilgrim, fell the last of their kind, Durin’s Bane (many thanks to Shane for putting the dots together on that one). Aragorn sits and sings of Beren and Lúthien to the hobbits as they make their way to Bree. Gildor the elf tells Frodo, Sam, and Pippin of his house, the House of Finrod; Finrod whose half-uncle Fëanor (perhaps greatest of all the elves) forged the Silmarils. Vast in conception, my inexperienced mind was unable to grasp the depth and breadth of writing and creation which Tolkien poured into his work, of which both The Hobbit and The Lord of the Rings are but single stories.