Review | The Way to the Spring by Ben Ehrenreich

Ben Ehrenreich’s account of his time spent in the West Bank, mainly in the village of Nabi Saleh, is a forceful journalistic record of the experience of Palestinians, supported by Israeli and foreign activists, who oppose the Occupation, run by the state of Israel and delivered by various arms of the Israeli Defence Forces (IDF) and other state agencies.

As well as descriptions of protests and violent put-downs, the book includes historical and political background to provide information and context. It is useful for readers new to the contemporary story of Palestine.

Embedded in the Community

As is often the case with Western activists and journalists in colonialist settings, Ehrenreich’s best relationships locally are with the children. He has full and frank engagements with many adults, notably Bassem and Nariman Tamimi, with whom he lodges for part of the time. They are active and experienced in the resistance to the Occupation which, in Nabi Saleh, focusses on a spring well and the land around it. A weekly march to the well, now occupied by the IDF and an Israeli settler community, to protest at the usurpation of the land and the water, is the primary act of resistance. These Friday actions – various combinations of march, protest, violence by the IDF, with tear gas, stun grenades, ‘stink water’ cannon, rioting and stone throwing by young villagers – provide a metronomic beat throughout the book. 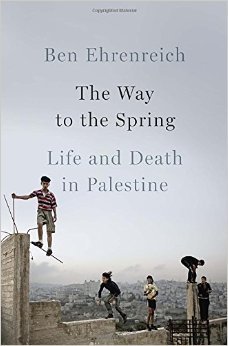 The term ’embedded’, when applied to journalists in war zones, first received general currency when applied to individuals and their relationships with Western Allied Militaries in Iraq in 2003. Ehrenreich is embedded with an extended Palestinian family, their neighbours and associated Israeli activist-supporters, who are, by dint of the occupation, engaged in acts of resistance each and everyday, many of which acts take them into direct conflict with the Israeli state and its forces.

Ehrenreich writes ‘on the nose’ most of the time, in a contemporary, Westernised journo-voice you would read in feature articles in, say, The New York Times orHarpers. He gamely admits to authorial defensiveness in that he wishes to offer the redress of story to the world he asserts is currently off balance. He aspires to something more modest than objectivity, which is truth.

He affirms, with pride, the truth that even in despair and hopelessness, people continue to resist.

Ehrenreich is a novelist as well as a journalist and he has a genuine capacity for story. He brings the reader into the incidents he witnessed and wrote about, in as far as any outsider can so do. There is a sense of immersion and insight. There is also a sense of being at a remove, hovering as a drone camera hovers above affairs, getting images and taking views.

Short ‘interludes’, scattered though the main text, offer wide and sometimes pinpoint views of the situation. They read like diary pieces from the London Review of Books. They work, in their own way, to offer commentary, often sub-textually illustrating just how difficult it is to overturn colonial occupation.

One such ‘interlude’ is entitled stagecraft, where Ehrenreich comments bitterly on the impotence of the Palestinian Authority (PA) and on the manner in which it acts as an enabling buffer between the population and the occupation. He views the rubble, jerry re-built PA headquarters, the Muqata’a, as the setting for the demise of possibilities for change.

As a contemporary primer on the character and experience of Palestinian resistance to the occupation, Ben Ehrenreich’s The Way to the Spring is an informative and affecting account by an ecrivain engagé, an outsider and a sympathiser, opening a window for readers into the turmoil at the navel of the world’s search for justice and peace.

The book ends with comprehensive notes and a useful index, which take it beyond the bounds of magazine reportage and into the fields of social research and historical accounting, where it makes valuable contributions.

The chapter on the city of Hebron, entitled A Matter of Hope, is a chilling digest of the militarised experience of people in that city and all of Palestine. The perverse normality that citizens endure takes Ehrenreich into considerations of science fiction and dystopian futures. The ancient city of Hebron is all too thoroughly dystopian in the present. The chapter ends with a killing and a funeral, leaving the reader to wonder at the chapter title and how small a matter hope is.

Literary Autobiography or Indulgent Fluff? | The Personal Essay in Ireland