Review | The Long Gaze Back, edited by Sinéad Gleeson

The marriage of Sinéad Gleeson’s vision and peerless curation with New Island Books has produced an anthology of Irish women writers that is a triumph in both scope and content. There has been a distinct lack of women writers in the anthologies of the last few decades and this dearth of inclusion in collected works of short fiction was mirrored in social exclusion and in women’s limited societal roles. In 1928 Virginia Woolf was asked to give a lecture at Girton College, Cambridge, on the topic of women and fiction. Her first line was “But, you may say, we asked you to speak about women and fiction – what has that got to do with a room of one’s own?”

This important feminist polemic explains the difficulties of a woman equally as gifted as Tolstoy and Shakespeare in writing great works of literature. Woolf explains that poverty and domestic shackles have always limited women’s capacity to contribute to the canon and that “women have always been poor, not for two hundred years merely, but from the beginning of time. Women have had less intellectual freedom than the sons of Athenian slaves.” 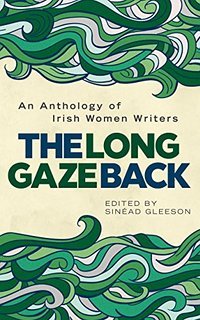 This aptly named anthology casts a careful eye over the short fiction written by Irish women spanning a few hundred years, and comprises of thirty stories, mostly unpublished, from thirty different writers. The title comes from a line in Maeve Brennan’s novel The Visitor: “comical and hopeless, the long gaze back is always turned inward.” Brennan’s writing was largely forgotten until the editor Christopher Carduff published a new, larger collection of Brennan’s ‘Long-Winded Lady’ pieces and The Springs of Affection, a volume of her short stories in the late 90s. This began a resurrection of interest in the work of Maeve Brennan and the haunting photograph of her gazing back at the camera with an intensity that is both melancholic and strong as well as classically chic captures the essence of this short story collection. Sinéad Gleeson’s anthology is also a type of resurrection project as some of the authors included in the earlier part of the anthology have been forgotten by the vagaries of time and cultural change.

The Long Gaze Back gives a respectful nod to the past with short stories from  Maria Edgeworth, Charlotte Ridell and Elizabeth Bowen, and a courteous curtsy to the contemporary established writers such as Anne Enright and Christine Dwyer Hickey. Most of the gazing, however, is directed at the amazing new writers bursting onto the literary scene with twenty two new stories from emerging writers like June Caldwell, Lisa McInerney and Mary Costello.

Gleeson directs her gaze back like a literary archaeologist who has excavated the archives and unearthed treasures for the short story lover’s delight. I had never read Norah Hoult’s work before, but really enjoyed ‘When Miss Coles Made the Tea’. In fact, Hoult’s story is the stand out story for me from the selection of deceased female writers. The story focuses on Olive Coles as she begins her first job as a junior assistant at the Standard Bookshop and Library. In just a few pages Hoult conjures up the world of this young working class girl who is partially deaf, as she encounters, for the first time, the charged world of office politics, and who emerges, despite the slights and setbacks, confident in her beauty, relishing the stares of passing G.I.s and looking forward to packing the job in after the war. This story has made me keen to read Hoult’s novel There Were No Windows. Gleeson’s anthology acts like a literary lazarus as she breathes new life into writers that were languishing on the neglected shelf, unread and unappreciated.

Gleeson directs her gaze back like a literary archaeologist who has excavated the archives and unearthed treasures for the short story lover’s delight.

Among the established writers, Anne Enright’s ‘Three Stories About Love’ lingers in the imagination long after reading. Mary Costello’s brilliantly titled ‘My Little Pyromaniac’ tells the story of a woman writer who inadvertently ends up living next door to an ex from her college days, who “had a handsome, hewn face, a little like Warren Beatty’s.” She can hear his family life going on through the porous semi-d walls and ponders “the simultaneous existence of our private lives.” The stylish June Caldwell stands out with the subversive ‘Somat’, which deals with the decision of whether or not to euthanize a patient who is brain dead in the aftermath of a stroke. Her idiosyncratic use of language and arresting images tests the traditional short story form. Roisín O Donnell’s ‘Infinite Landscapes’ and Eimear Ryan’s ‘Lane in Stay’ shimmer with originality and show that the short story form is in safe hands with our contemporary women writers who are adroit with the form. JG Ballard sees short stories as “the loose change in the treasury of fiction, easily ignored beside the wealth of novels available, an over-valued currency that often turns out to be counterfeit”. In The Long Gaze Back, Sinéad Gleeson has collected for our enjoyment and for posterity a treasure of short fiction, its value inestimable to women writers and to readers, the publishing gem of 2015.

Anne ONeill has an M.A in Creative Writing from Kingston University. Her work has been shortlisted for the Cúirt New Writing Prize, the Over The Edge New Writer of The Year Competition, and the James Plunkett Short Story Award. Her non-fiction has appeared in The Irish Times, and she has been a regular contributor to RTÉ Radio One.