Poetry Review | Flowers, All Sorts In Blossom by Oisín Breen

The themes play out over a work that moves with ease between prose and taut verse. In-between, repetitions and incantations give a gentle structure and grounding for the reader. For instance, the repeated ‘Whist, I say./Whist, I know./Whist, I know and love you.’ The lines grant the reader a welcome sense of intimacy. In the loftier sections of the book the voice is more removed:

‘And her eyes: Hanseatic trading ships marooned in the stony places of, differing economy, persuaded to look, unshewing to themselves.’ 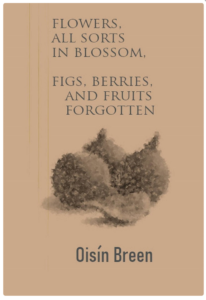 It is best to approach Breen’s book as a whole piece. Each part connects intricately to the next with the themes of death and love running throughout. The book begins and ends with the tenderly human act tending of graves. First, his father’s ‘And I place flowers on my father’s grave,’ and ending with his mother’s ‘Tending her grave, it remains as pretty as ever.’ A powerful echo of the cyclical nature of life.

It is clear that Breen finds a joy in words and language. For example, there is a pleasing play on the repeated words ‘incant’ and ‘recant’ in the third section. The use of language also mirrors the shifting of time within the work, ‘there was a thunderstorm/ tomorrow’ and ‘heartless to the/ scolding I’d just received in recompense for what I am about to do’. The unsteadiness of time suggests the unreliability of memory. There are times, however, when the poet’s dedication to vocabularic variety can interfere with the natural flow, for instance: ‘…I am asymptotic, and bifurcate in mnemonic flight, and each point is plotted in baroque notation…’ The word ‘baroque’ feels fitting.

Oisín Breen is originally from Dublin, now resident in Edinburgh, and he weaves the influences of both vocabularies into his work. Use of words like ‘kenning’ and ‘grá’ give the book a rich linguistic texture. Breen adds to this texture with his anachronistic choice of spelling, for example: ‘shew’ and ‘o’er’ – and phrasing: ‘sightlessness, here sited, oh how it baleful sounds.’ With these choices Breen consciously places the work outside the realm of the contemporary poetic style. This choice is a bold one, but it fits naturally within the fabric of the work.

The Mythology of Oisín Breen

This is a book that is certainly a challenge to the reader. Ancient mythologies mix with the poet’s mythology of the self. The writing of Oisín Breen is dense with references to Babylonian gods ‘Adad, so sited, your bridge is no longer worth a penny,/ since Shala, the consort, sells now oysters in cast iron shells’;

she is old enough we’ll – with raven’s colours – Naoise, Ardan and

Ainnle pinioned by a spear, they live like flowering weeds in the memory

of Deirdre’s head, it bashed to pieces against the soft calumny of rock.’

It was three-times it happened, and on the third day I slew a cockerel just

to smooth its dried ochre in a paste over my thought split eyes.’ 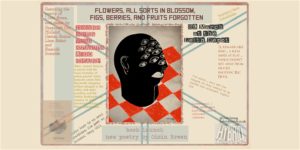 While the breadth of references is impressive, they can, at times, make the writing feel heavy-handed. The dropping of ancient names can sometimes overcrowd the writing and distract from the themes at its heart. As a reader, it was a struggle to keep up with the growing list of names. Characters as far removed from one another as Adad and Rita Hayworth appear, one after another. The final page of the second section is in fact just that – a list of names.

The Power of Human Moments

Oisín Breen holds most power as a writer when his images are grounded in the concrete. For instance, when the book opens, we are gifted with the painfully human juxtaposition of the poet visiting his father’s grave while two junkies sit nearby eating watermelon:

‘And I place flowers on my father’s grave,

to bring life to the dead.

And beside me two junkies eat a watermelon from a plastic bag,

And a black and white tit hops beneath their feet.’

This striking image has a visceral quality that grounds the reader in the world of the poet. The language here is lucid and it is in moments like this that Breen’s writing feels most honest. Later in the same section the poet recalls a childhood memory by the sea in Wexford:

‘We were barefoot because we had been in the sea,

and the nearby road was made of gravel,

and it hurt to walk on,

and the sorrows of the sea-cliffs punctured the dead air.’

The reader is thrown back in time, but lands surefooted as a result of Breen’s skilful rendering of the past. We get the impression soon that the memories themselves ‘hurt to walk on’ as the poet recalls cruelty inflicted on a peer as a ‘guilty treat.’ In the same way the poet remembers the sun on that day, these verses have a ‘technicolour quality.’ Their power is in their realness.

In an age when banal aphorisms, written to fit into an Instagram feed, are being passed off as poetry, Oisín Breen is the welcome antithesis. Refreshing in its complexity, this book will surely reward the willing reader.

FLOWERS, ALL SORTS IN BLOSSOM. FIGS, BERRIES AND FRUITS FORGOTTEN is available now from Hybrid Press

HeadStuff is currently open for submissions until the end of April. For guidelines please see our submissions page.

Laura Caffrey is the Poetry Editor for HeadStuff. She is a teacher and poet based in Galway city. Laura has an MA in Writing from NUIG, with a focus on poetry. Her poems have appeared in various places including Crannóg and The Stinging Fly, and in 2018 she was shortlisted for the Cúirt New Writing prize. When not teaching or writing Laura can often be found plunging into the cold Atlantic at Blackrock, or curled up with her nose in a book.