Poetry as therapy usually produces dull work. It’s function is to aid a person in their recovery or to help them through a difficulty. Insofar as it helps the person writing it, it has value. For the reader though, it can be turgid. Aaron Kent’s Tertiary Colours is anything but. Subtitled A Post-Traumatic Verse, Kent’s pamphlet from independent UK publisher Knives, Forks and Spoons manages to avoid the worst aspects of poetry-as-therapy. Instead, in this short work – it runs to just 33 pages – we are invited into a densely packed, frightening world where trauma haunts the everyday and paralyses the narrator of the poems. It is emotionally exhausting to read – impactful, unflinching, it is poetry not for the faint of heart.

There is nothing certain in the world of these poems, the animal and the human mix and bleed into one another, the real and the imagined exist side by side in an occasionally terrifying tour-de-force that sees the surreal transform into the real and back. Where  “Demons sit in the dentist’s waiting room, picking the sand from their teeth” and our narrator begins “a new obsession with tape recorders, so I can play my thoughts back every Thursday to the kintsugi club.”

Contingency is everywhere in the poems. Many sections of the poems contain no standard breaks but slashes abound acting as both punctuation and also suggesting that things are otherwise, that they represent an “or”:

His abuser is summed up best in the penultimate lines of the poem:

‘You are the weakness

I cradle at night

and the rapid fire

on a hospital ward,’

There are lines with strikethroughs, suggesting erasure and reconsideration. Yet they remain readable. Excised but present. Such devices act as means for Kent to not just say what he wants to say, but also to indicate a not always clear grip upon “reality”. A formally adventurous series of poems, Tertiary Colours is a serious exploration of the lasting impact of trauma – in this case the trauma of having been the victim of sexual abuse. You may not feel better after reading it, but it is not a pamphlet of poetry you are likely to forget in a hurry. 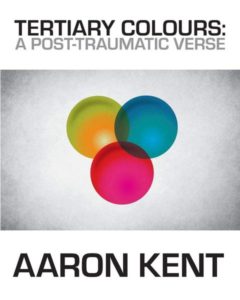 Tertiary Colours can be purchased here

Photo by Vasundhara Srinivas on Unsplash

Ask Grainne | My Kids Have A Better Social Life Than Me

Aly & AJ | Sisters Doing It For Themselves

Poem of the Week | The Rover by Jen Hughes