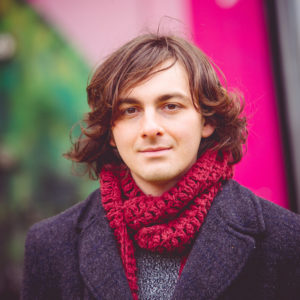 Rowan McCabe is a poet and performer from Newcastle upon Tyne. Aware that poetry isn’t a proper job, he
decided to create his own and is now the world’s first Door-to-Door Poet. Knocking on strangers’ doors, he asks what is important to them. He then goes away and writes a poem about this, free of charge, before bringing it back and performing it on their doorstep. Rowan also performs on stages and has appeared at the Edinburgh Fringe and the Royal Albert Hall. He is a Great Northern Slam winner, was nominated for a Saboteur Award and his work has been featured in the Guardian, on BBC Breakfast and was commissioned by Radio 3’s ‘The Verb’.
“A must-see”– Morning Star
“A rare ability to blend humour, insight and brilliant writing and performance” – Kate Fox

How did door to door poet start out? Where did it come from?

I started in the North East in a place called Heaton, which is near Newcastle city centre. I was thinking about what it means to be a working class poet. I’m the first poet in my family and, though they’ve always been really supportive, it’s a pretty weird choice of job. I was also wondering if more people would enjoy poetry if they were approached with it in the right way; going door-to-door seemed like the most efficient way of meeting a cross section of the public. The poetry world tends to be quite insular, especially in the North East. You end up seeing the same performers and audiences. So it was really exciting to have the chance to approach someone who might never have engaged with it before.

The response has, generally, been overwhelmingly positive. One of the best reactions I had was in Bensham, near Gateshead. A man called Alan answered the door. He said, ‘You can come in, but I’ve got no interest in poetry whatsoever. I don’t want a poem.’ It went from that, to me showing him the poem I wrote for him, to him saying he really needed more poetry in his life. He came on BBC Breakfast with me. He even went to a few poetry events and made friends with some other poets I know. That felt like a good day at the office.

Has the experience changed you as a poet?

Definitely, in so many ways. I’ve had the chance to learn how to make my work connect with people who, in many cases, know nothing about poetry. That’s not to say they don’t know lots about something else. They often understand a huge amount about a subject I’ve never heard of. So I’ve had a chance to find a middle ground with people. I’ve met a lot of residents from different backgrounds that I just don’t think I would have met otherwise: I went to a mosque for the first time, I met the imam and watched the Friday prayer there. It was a really great opportunity to ask some very basic questions about how a Mosque works. Things I’d always wondered but never had the chance to find out.

From a more personal point of view, Door-to-Door is now so tied up with my own personal life, it’s really hard to separate the two. The project has led to me performing at Glastonbury, being on national and international telly, and lots of other amazing opportunities. Even though, in some cases, what I’ve been booked for isn’t Door-to-Door Poetry, it’s all a result of the project.

I see Door-to-Door Poetry as my form of political protest. It’s about trying to show that strangers aren’t as distant as you might think. We don’t talk to each other much anymore, myself included. We’re all very boxed off. And we’re all constantly on social media. Experts are calling it a ‘Loneliness Epidemic’. Door-to-Door is a way of trying to highlight that the people in your neighborhood maybe aren’t that scary, whether that’s on a council estate or in a more affluent area. I’ve talked to people on some streets who’ve said they’ve lived there for years and have never met their neighbour before. And I’ve been able to say, ‘You should go and visit such and such, they’re really nice.’ It’s great to be able to help make those little connections.

Who are your biggest poetic influences and why?

The Aisle 16 Collective have been a big influence for me. Poets like Ross Sutherland, Luke Wright, Tim Clare. They can be very experimental, but they’re always very accessible as well. And they don’t take themselves too seriously. When I discovered them. the penny dropped and there was another way of doing things. To be confident enough to not take yourself too seriously and to do something different.

How important is the North-East, as a place, in your work?

My first show and pamphlet was called North East Rising and it was about my love/hate relationship with the region- I think the place has always been in what I write. Plus, I’ve lived my whole life here too, so it’s inevitable really.

It’s felt important to stay and work in the North East. I went to Newcastle University and, after graduating, there was a mass exodus of my friends moving to London. There is this idea that if you’re going to make it in the arts, you have to move to a big capital. My partner and I had a kind of stubborn refusal to go. We took the decision that leaving isn’t really going to make a difference. If there’s not the opportunity in the place you live in, you can create that opportunity. It helps that I really love living here, too.

A lot of my development as a writer has been about learning to accept where I’m from. At a gig in another part of the country, I never used to mention my accent. But I’ve come to accept that it’s a bit of an elephant in the room, and I think people sometimes feel uncomfortable laughing at your jokes because they don’t want you to feel like they’re laughing at you. Now, I usually start by saying, “OK. I’m Geordie, right, but I’m not going to rob you.” It kind of breaks the ice.

What are you reading at the minute?

I’ve just finished Poverty Safari by Darren McGarvey which everyone should read. Right now. It is very topical and vital. I genuinely think this country would be a better place if everyone stopped what they were doing and took this in. And I’ve just started The Life and Times of Francie Nichol of South Shields by Joe Robinson. This is for research for a residency, but I’d recommend it to anyone. It’s the first-hand testimony of a working class woman living in the early 1900’s. The author sat down with his grandma, recorded what she said, and typed it up, word for word. At points it’s hilarious, but there’s also some really horrendous descriptions of the living conditions at the time. I’m very interested in the difference between people trying to write fictional tragedy and people actually talking about it in real life. The tendency is to get very melodramatic in the first case, but in real life it’s often done with just a couple of words. Sometimes less words are definitely more powerful.

What next? What projects are you working on?

I’ve just got a grant from the Arts Council to take Door-to-Door Poetry all around England, to ten different locations. That will last the whole year. I’ve tried to make sure that there’s a big difference between the places, geographically, socially and culturally. The idea is that, by the end, I’ll have created a kind of ‘poetry snapshot’ of England.

I’m also doing a residency in a library called The Word in South Shields as well, which should be really nice. I grew up around there. South Shields and Newcastle are right next to each other, but people can get very territorial in the North East. This will be the first time I’ll have worked as a poet at ‘home’. I think it’s going to help keep me grounded too, as I go off all over the country. It feels like I’m going back to my roots.

How Mass Hysteria Explains The Happening