‘Does it cause a little chill in your heart?’ | Interview with Theo Dorgan 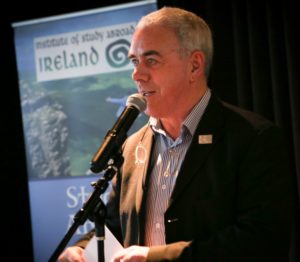 Born in Cork, Theo Dorgan is a poet, prose writer, documentary screenwriter, editor, translator, librettist and broadcaster. His latest collection, Orpheus, takes on the challenging sapphic form to tell the story of Orpheus, the musician-poet, from artistic awakening through to the cost of remaining faithful to his calling.

Can you tell me a little bit about your upbringing and how you came to be a writer?

I flourished in UCC, with the help of John Montague and Sean Lucy, among poets like Thomas McCarthy, Greg O’Donoghue and Sean Dunne. We were always up in Montague’s house, he gave us access to his private library and that was a real education; in those days I was reading a book a day. I come from a working-class background, I was lucky that my parents were adamant we should all be well-educated. I worked part-time to support myself, on building sites, the library, the post office, I had a scholarship too, every little helps. But I always knew, from the day I learned to read, that I would be a writer. Being independent and being a writer seemed to me then, as they still do, seamlessly woven together.

When did you write your first poem?

In Corca Dhuibhne, the Gaeltacht in Kerry, I was in Kruger’s pub drinking rum and black. I saw a young woman in the same colour sweater as the drink, and I put my glass down, walked over and asked if she was going to the céilí in Muiríoch. I wrote her a poem while walking over from Ballyferriter that night and gave it to at breakfast her the following morning.

Orpheus is inspired by Ovid’s Metamorphosis, what would you say to readers who may be intimidated to read poetry that feature mythology?

Mythology comes from a sophisticated pre-literate society, as a way of centring the core experience of being human. It’s not myths that are intimidating, but the posing around them. All you need is to be enter the mind of a teenage girl to know that Eurydice might have chosen to be in the dark, a kind of archaic emo. Orpheus was a classic I’ll sort it out for you kind of guy. Ovid saw the myth in terms of Orpheus failing to rescue Eurydice, I see it as Eurydice choosing to make her soul down in the dark, and Orpheus was being macho & presumptuous. I don’t in fact, draw anything from Ovid except the architecture of the story, the slant is all mine. All mythical figures are projections of ordinary humans. They endure because they feature all types of beings, they sustain successive readings through time. I read that particular story from a feminist perspective. But Orpheus himself, now, well I just tell him as he spoke himself to me.

Was it challenging to write Orpheus in the Sapphic mode?

No, it was amazingly liberating. You’d think it’s a constraint but it’s flexible. It speeds up and slows down, it’s ruminative but active. I wanted to tell a story with its roots in the archaic, using an archaic metre, to see if I could breathe new life into the form. To see if a metre evolved in Greek could breathe and resonate in English.

How do you know if a poem is working?

My test of poetry is this: does it cause a little chill in your heart, a hesitation in your step, the hair on your neck to stand up? Poetry is also of the body and breath, the body responds to poetry, it alters the consciousness. If you say a poem to yourself, it brings you into a dream-like lucidity, as a mantra does.

Do you show your work to others before sending in a finished manuscript?

I’m Paula’s first reader and she’s mine. Tom McCarthy is a good pair of eyes too, he has a sturdy presence. We’d send each other work but we wouldn’t have any illusions. If we think there’s a problem, we’ll say it, but we stand by our work. A turning point for me, beginning to publish,  was when Eamon Grennan pointed out in a review of my first collection that four poems weren’t working properly — and I saw that he was right, if someone is telling you something hard, you need to listen to them. At least, listen.

What do you think of the current state of poetry in Ireland?

In some ways, it’s too big a question. What I will say is that there is an extraordinary vitality and richness now that wasn’t there when, for example, I took over Poetry Ireland in 1989. For one thing, there were so few women poets getting readings, being published. As Eavan Boland says, the permissions weren’t there. Insofar as it was in my power to do so, I charged into that problem head on. Fág a’ bealach! But, poets make and choose and often have to fight for their own occasions, their own liberties, and in our time there has been a flourishing of confidence. Now we can speak of poetries, not poetry, and I’m watching all this rich ferment with fascination.

You’ve written a novel, a libretto, travel books to name a few, how do you find the transition from one form of writing to another?

Different occasions prompt different forms of expression. The idea for my novel (Making Way) came to me as I was falling asleep — I saw this couple chatting at the stern of a moored boat, and I wanted to know what they were talking about. Once I started into it I got up every day wondering what happens next and wrote what came in on the wavelength. Sappho’s Daughter was a slower process, it came in two big chumks about a year apart, as if dictated. For the travel books, I simply wanted the reader to believe they were on those boats. I wrote a chapter a day and when things weren’t happening, I thought about things I had not yet described, like cooking. One reader gave out to me for cooking curry from a jar, leaving me to wonder where he thought we find fresh ingredients out on the ocean?

The poems, I say always, and few believe this but you’ll understand what I mean: we don’t write the poems, the poems write us. Every one is a gift. As to transitions, well that seems to take care of itself, to be honest; I never give it any thought.

Do you have any final advice for aspiring writers?

It’s all about the poem, the poet does not matter. People are quick to discover what’s new but ninety percent of what’s writent will fall into eternal silence — so don’t worry. What’s important is what’s left when we’re gone, and nobody knows what will be kept. The human race is peculiar about what we choose to keep and not keep, no strategy or tactic can pre-empt this. I often think of Tom McCarthy’s pithy line from an early volume, where he says that the artists’ duty is ‘To lay art anonymously at earth’s altar’. The only possible advice I can offer is: read all you can with an open mind and heart, listen to the voices, learn the craft, be humble in the face of the gift, and be fearless.

Molly Twomey is a Hatha Yoga Teacher and receptionist who will enter a Masters of Creative Writing in UCC this September. Her poetry has featured in the Irish Times where she was shortlisted for the Hennessey Award. She blogs for The Mighty and Spunout.ie and is an editor of The Quarryman. She has been listed for Over The Edge New Writer of the Year and was a featured poet at Over the Edge Open Readings Series. She is an action panel member for SpunOut.ie and has been offered scholarships for Creative Writing in both NUI and UCC.

Between Two Ferns: The Movie Doesn’t Understand Its Source’s Appeal