‘The landscape is very dramatic’ | Interview with David Toms 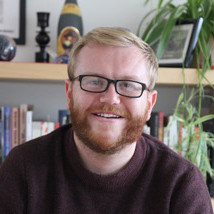 David Toms lives and works in Norway. His new poetry collection is Northly from Turas Press.

Which poets/writers most influenced you in your new collection, Northly?

You know, it’s hard to say whether such a poet influenced such a poem or not, I think. I can’t say that x writer undoubtedly influenced this bit or that. Tracing those lines of influence, is hard I think. Certainly being exact about it. It’s in there in these poems I’m sure, but untangling that might be harder for me than someone seeing this stuff new.
A good few of these poems grew out of work I’ve been tinkering with for a while now and so who and what I’ve been reading has changed over the course of the few years these poems were written. I have a few stalwarts I usually return to: the work of Trevor Joyce say, or Michael Smith’s Maldon translations. I got to Norway with a handful of poetry books, those included and so those are what I turned to.
The other influence, has been skaldic poetry, which is there throughout the collection, and anglo-saxon poetry and saga poetry, up to a point. I have been influenced by Alec Finlay, a Scottish poet who works a lot with the outdoors. In particular his recent place-aware book on the Cairngorms, called gathering was a big influence in terms of thinking about language shaping geography and vice versa. Most people know of Nan Shepherd’s The Living Mountain, but I think Finlay’s book is extraordinary in its own right.

You live in Norway but were born in Ireland, Has that change of geography and culture influenced your work, if so in what way?

I certainly think that it has, yes. I’m not sure as yet I know exactly in which way. I’d tentatively suggest that greater access to nature – and the sheer size and length of Norway – mean it feels very different to Ireland. The landscape is very dramatic. The culture is harder to put my finger on – in terms of how it has influenced the poems say. Life is quieter here, there’s more time, for me, now, for reflection. The poems are I think quieter than my other work.
But maybe life would be quieter now in Ireland for me too – I began writing and publishing poems in my teens and early twenties. I’m at the start of my 30s now, I’m different, life is different, the poems necessarily are different too I think.

Your new collection Northly is published by the recently launched press Turas Press based in Ireland, how important are small press in the eco-system of poetry in Ireland and the UK?

Oh absolutely vital. Most of the poetry on my shelves comes from smaller presses or are by people who began on the small press circuit and maybe eventually grew to be collected, selected, anthologised by bigger poetry presses. Small presses are where it’s at – in poetry but elsewhere too. I think you can see that in Ireland with the likes of Tramp Press say. There’s more room to be daring in a small press, especially in poetry. Turas and other small poetry presses take chances and I’ve been lucky that many over the last 10 years have taken their chances on me.

You have a PhD in history, how influential is that background and knowledge in history an influence on your poetry?

I think it’s been massively influential. To give a concrete example, the final section of the book “Gausta” is inspired by a 10th century runestone in this area of Norway we often go to visit on holidays. Finding the runestone itself, and then finding out about its history – and the various theories and stories around it – took historical research skills that I learned in university. Finding articles, assessing them and so on. The research itself didn’t make it into the poems, but what I learned from the research formed the basis of the poems that make up that final section.
It’s about an interest in the past, which by the way you don’t need a PhD to have or to even do this research, but I suppose I know how to approach historical sources and materials. My historians cap was on for other poems in this book too – poems about Waterford especially say. History is always there in my work, but like I say I think the PhD helps me approach it a specific way. History doesn’t only belong to professional historians.

What next in your writing? Are you working on a new project?

Right now I’m not thinking too hard about what’s next in terms of new poems. In a lot of ways Northly is still next. I think there’s a tendency to say that the publication of a book is the culmination of the work but more and more I feel it isn’t.  Getting it into readers hands matters too. That’s what’s next. I’m really proud of this book. Until I’m satisfied Northly has gone as far as it can, then I’m not worrying about what’s next in my writing.
poetryInterviewDavid Tomscontempoary poetry
Share

Poem of the Week | The Unevolved Cactus by Lauren Anne Cassidy