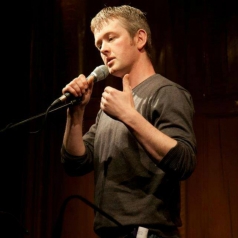 Colm Keegan is a writer and performance poet from Dublin, Ireland. Since 2005, he has been shortlisted  four times for the Hennessy New Irish Writing Award, for both poetry and fiction and won the All Ireland Poetry Slam in 2010. In 2015 he was awarded a residency in the LexIcon, Ireland’s largest public library. He is a creative writing teacher and co-founder of the Inklinks Project, a creative writing initiative for young writers. In 2011, he was nominated for the Dublin Fringe’s ‘Little Gem’ Award for the spoken word play he co-wrote with Stephen James Smith and Kalle Ryan – Three Men Talking About Things They Kinda Know About – which has toured Ireland and sold out in Bristol, London and Paris. His debut collection, Don’t Go There, was released in 2012 to critical acclaim and is available from Salmon Poetry. He was one of the organisers of Lingo, Ireland’s first Spoken Word festival. Follow Colm Keegan on Facebook or Twitter.

We chat to Colm Keegan ahead of the live recording of his brand new podcast about poetry & creativity, The Flow State, on the HeadStuff Podcast Network.

How did The Flow State come about?

I’ve always loved the special electricity of a live event, the collective intimacy of that is where I started the life I live now, and I love doing stuff on the radio too. The Flow State grew out of my love for both of those things. I was thinking about organising a small live event, with a workshop element, more of a club for hardcore poetry lovers actually, when a friend asked me to consider doing it as a podcast. I thought that would be cool. The event I wanted to do, but saved for other people to enjoy as well. Then I spoke to Alan here at HeadStuff, who I’ve been trying to set something up with for a while, and boom, The Flow State was born.

What should people expect when they come along to a live recording of The Flow State?

I think the logo is a good symbol for what to expect. Creative connections in a big nebulous confusion that might be a giant brain. But it’s more than that too. First and foremost The Flow State will be a podcast about poetry and creativity, but it’s also an idea – a belief that imagination prospers when left unfettered, and it’s a special place, where ideas get to transcend place. I suppose it’s about spirit really. The spirit of creativity like a big hot air balloon that we fuck all of the baggage out of as we float up into the skies of inspiration while hopefully not dying from lack of oxygen.

It’s also about artists getting to ditch the myth that they already know it all. In the conversation element of it (myself and the two guests just having the random chats), the Flow State becomes a means for practising artists to exchange processes and to grow from admitted unknowns.

I’m not gonna keep the door closed on other forms either. Poetry is in all literature as far as I’m concerned. Like, when Baudelaire said…

“Who among us has not dreamt, in moments of ambition, of the miracle of a poetic prose, musical without rhythm and rhyme, supple and staccato enough to adapt to the lyrical stirrings of the soul, the undulations of dreams, and sudden leaps of consciousness.”

I like to think he was talking about flow, so, I’ll be inviting any type of writer along who’d like to be involved – poets, novelists, rappers, whatever, and we’ll chat about their favourite poems, best processes, prompts they love and use to get unstuck, that sort of thing, alongside roundtable chats about everything, and hopefully a bit of craic too.

We’ll also talk about great pieces from the guests favourite writers, so it’ll be a nice mix of older and contemporary stuff.

If that’s a bit too vague a description for your liking. It’ll be an hour and a half long show. Two interviews with two of my favourite writers, a panel discussion, and a short open mic.

What are the big the plans for The Flow State, where are you hoping to take it?

No idea, and that’s what excites me. We’re booked into the library for four shows. They will be turned into twelve episodes. Who knows what will happen after that. If there’s energy there it’ll grow, if it doesn’t, no problem. See how it flows.

Who are your biggest poetry influences?

It changes all the time. Right now I’ve kinda left any conscious influence behind and am trying to write as much as I can as myself, without sounding like anyone else. But, if you look at my new book Randomer, I’d say you’d see a few influences alright. My respect for the precision of poets like Don Paterson, or John Murphy here in Ireland, is definitely evident in certain poems. I’d probably say something else tomorrow.

But then, if I’m really honest about influence, it’s the single poem that does it for me. Sometimes as a poet you just feel something get into you that goes beyond mere influence. Some poems are like fucking hand-grenades thrown into your heart.

Paula’s Meehan’s untouchable rager of a poem The Statue of the Virgin at Granard Speaks for example. I could feel that poem actually rewriting my DNA.

How important is honesty and utilising your own memories, and your own life in your work?

Honesty is important but it’s expendable. I always start with honesty, but I never refuse to an opportunity to distort it if it presents itself. Honesty can actually be different to truth. Sometimes the best fictions are where we hear what really has to be said. And the unvarnished truth can be dull and boring. I’d much rather say I was waiting for a bus forever, than say it was ten minutes late. I like to keep moving the goalposts, like.

How important is Dublin as a city to your work?

Very important. But then I’m just some howya from the flats who doesn’t know any better. Up the flats.

How important is the connection between nature and humans in your work?

Donal Ryan said that your new book Randomer “should be read by every citizen of this state.” It’s out this Thursday and is your second collection. What is it about? Is it going to be different to the first?

I think it’s different, it’s less tied to place I think. There’s a lot of loss in the book but a lot being held onto too. Actually I think that’s what it’s about. What we hold onto. After the great shakedown this country has undergone over recent years, these poems are literally all I had left. Poetry sometimes is like that I suppose, a sort of panhandling, sifting through life, seeing what’s worth keeping.

I’ve way too many books on the go and they all suffer terrible neglect because of my playstation, but on the weekends I sit on the balcony of my apartment and read some of The Peregrine by JA Baker, it’s a fucking gorgeous book. I keep seeing peregrines everywhere now but when I get closer they’re just pigeons. I’m trying to finish Slavoj Zizek’s Living in the End Times too, which is a gloriously confusing and portentous book written in 2010 that attempted to warn us about now, but had no idea how fucked up everything was about to become. I also have a copy of June Caldwell’s Room a Little Darker which is a fucking mental and deadly collection of short stories that I have to finish soon as she’ll be a guest at March’s Flow State!

…is a podcast about poetry and creativity. Interviews, processes, prompts, roundtable chats and craic. Presented by Colm Keegan and recorded at Tallaght Library in association with HeadStuff. Our first show will feature Sarah Maria Griffin and Dylan Coburn Gray.

The podcast will be recorded with a live audience in Tallaght Library 2 – 4pm Sat 24th February.

If you’d like to read/perform at the open mic slot on the day contact [email protected]
This is a free event. Open to all. Book now as places are limited.

Dylan Coburn Gray is a playwright and poet. His work has toured to New York, Moscow, and – most exciting of all – Cork city. His first play Boys and Girls was shortlisted for the Stewart Parker Trust award and won the Fishamble Best New Writing Award. His play Citysong won the 2017 Verity Bargate Award, and is in the process of being staged by Soho Theatre. With MALAPROP Theatre he has co-written Everything Not Saved, Jericho, and Love+. Other solo work includes Briseis After The Black, Blackcatfishmusketeer, Drawing Crosses on a Dusty Windowpane, and This Is A Room for Dublin Youth Theatre.

Sarah Maria Griffin lives in Dublin in a small red brick house by the sea, with her husband and cat. She writes about monsters, growing up, and everything those two things have in common. Spare and Found Parts is her first novel.