Hop-Scotching, Recycling, Whirlwind of a Life | An Interview with Ciarán Hodgers 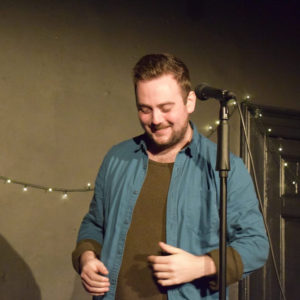 Ciarán Hodgers is an Irish poet working and living in the UK. He is the Sean Dunne National Young Writer 2010, an International Pangaea Poetry Slam Champion 2015 and the Word War 3 Slam Champion. In 2014 he produced a spoken word EP titled The Hours and in 2015 he exhibited his experimental prose-poem 4/3 in Amsterdam’s NEU NOW festival.

Having cut his teeth in Cheshire, Manchester and Salford he’s performed at Guy Garvey’s Meltdown Festival in the Southbank Centre, Lingo Festival Dublin, the London Irish Centre, the John Ryland’s Library, Threshold Festival, the launch of Before Passing by great weather for media, the launch of Gerry Potter’s The Story Chair, Manchester Political Pride, FLARE Festival and in the Royal Albert Hall at the Hammer & Tongue National Slam Final. Cosmocartography is his first full collection of poetry. www.ciaranhodgers.com  @CiaranHodgers

My influences are always changing. The first poets that had an effect on me were Sylvia Plath and John Donne – their visceral and complex writing definitely steered me in a certain direction. I’m inspired hugely by my friends and colleagues on the poetry scenes around the UK and Ireland. I particularly love hearing new voices, ones that I haven’t heard before that have something surprising or challenging to them. Getting out of the house and going to live events, whether it be poetry or even music, feel like fuel for my poetry – the experience of emotion in a shared, communal space, that’s probably the most common denominator rather than a particular individual.

I’m a bit of a floozy when it comes to my reading tastes; I’m constantly moving from one thing to the next, skipping across genres and forms. In my bag at the moment is Danez Smith and Alice Oswald but I’m also reading Douglas Adam’s Dirk Gently’s Holistic Detective Agency after binging the Netflix show, I keep dipping into Adam Kaye’s This Is Going To Hurt, even though I’ve read it already. It’s probably the best book I’ve read this year. I have a stack of books by my bed tall enough to crush me if it ever falls over. In that pile are a few charity shop salvages, like David Mitchell’s number9dream. He’s my favourite author and I have to buy a copy if I see it in a second hand store, which I’ll read and pass onto a friend so that I can talk about how awesome his writing is afterwards. I also nabbed a signed Douglas Coupland for a £1 in this amazing records and book shop in West Norwood with a friend when I visited London a few weeks ago and I’ve just powered through Amanda Palmer’s memoir The Art of Asking after hearing about it an arts training event.

There is an interesting structure to your collection, with the different ‘chapters’, where did this structure originate from?

After a couple of years I’d recognised a few themes arising my work again and again. They related, I felt, to different versions of love you might find in Ancient Greek society. I’ve always been fond ancient civilisations, and having this as the foundation for the work allowed me to say more on each topic. Each section is a journey in itself, and each section is part of a larger journey. The chapters act as pillars, holding up and fortifying the idea of the collection. The chapters’ Greek names are; storge, philia, agape, eros, philautia and pragma and in the book they relate to family and home, friendship, nature and the universe, sex and relationships, self-care and narcissisms and finally a mix of society, solidarity and protest. Unlocking this perspective allowed me to more confidently frame and place each particular poem.

Some of your poems draw on the experience of being Irish outside of Ireland, has that influenced your poetry directly?

Over anything else being an Irish person outside of Ireland has been the most influential experience on my writing. Choosing to emigrate and make a life for myself abroad challenged who I thought I was, and made me more aware of myself and my experiences in general. People would probably say that I was never really that bothered about “Irishness” before I emigrated, and it’s true that I perhaps didn’t feel a very strong sense of my culture. Since leaving, I’ve become nearly obsessive about it and this can be typical of many people who leave their motherland, especially the Irish. Since all my experiences and cultural idioms have been placed into different contexts, it’s allowed me to have a deeper understanding of belonging, of people, of how our brains work and how we communicate. 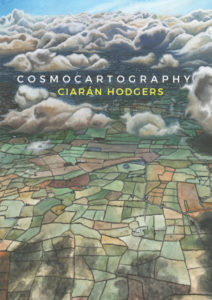 Talk me through the title poem of your collection which has a really great interesting title, ‘Cosmocartography’, what instigated this poem?

Cosmocartography the poem, was commissioned by the European Science Open Forum where I wrote an extended piece for performance based on some very detailed astrophysics doctoral research concerning The Cosmic Dawn. For anyone who isn’t an astrophysics PhD researcher, this is the period of time (a couple of billion years) between the Big Bang and the first star. I learned how stars formed from nothingness, how they essentially destroy themselves flinging across the chaotic atmosphere to eventually join up with other random bits of matter and create new stars. This hop-scotching, recycling, whirlwind of a life seemed to reflect a lot about human nature. In developing the book, the title has become descriptive of the wider theme of meaning, how it changes, how we change it, how we use it – so the title leans towards a couple of different interpretations. The poem was performed at the gorgeous John Rylands library in Manchester. It’s introduced me to the inspiring world of using science to prompt poetry and if this sounds up your street, you’ll want to check out Dr. Sam Illingworth and Dan Simpson for two very excellent poets who are leading the charge on this.

You move between different forms quite often within this collection. How important is form to you in your writing?

Form isn’t something I particularly think about before constructing the poem. Once I’ve gotten a few drafts out of the way, once the poem at least knows what its saying and is close to doing it accurately, I’ll start carving out the form. In this book I was generally more concerned with saying things the right way, rather than presenting them in a particular way. The real challenge is to be able to do both of these simultaneously. I wanted to be clear, direct and open. I do play with form a little throughout, there’s a few poems that felt more comfortable experimenting with this than others but mostly, I’ve used form to reflect the live, spoken aspect of the work. It emulates the ticks and rhythms of how I perform them and it felt important to mould the physical presence of my voice throughout the book somehow.

What next with regards to your poetry?

Well I’m about to undertake a 30 or so date UK & Ireland tour to promote my debut collection. This is by far the biggest venture I’ve ever undertaken, I’m bringing the work home for a special launch and then hitting up most major cities over the winter. All the dates are up online at www.ciaranhodgers.com and after that, who knows. I’ve got a good sense of two projects I want to tackle after the tour that I’ve been putting off for years that I don’t think I can ignore anymore. For now, I’m prepping for tour which includes rehearsing, freaking out over it happening, worrying about ticket sales, putting myself in check and starting the cycle all over again.

Cosmocartography is out on National Poetry Day, 4th October, through Burning Eye Books with an extra special preview taking place at Beers for Queers at 7pm, in District, Jordan Street, Liverpool. To buy Cosmocartography and see full dates of the UK & Ireland tour, check out www.ciaranhodgers.com

Photo by Puk Patrick on Unsplash

Album Review | Fields Amaze and Other Strange Music Gets Remastered