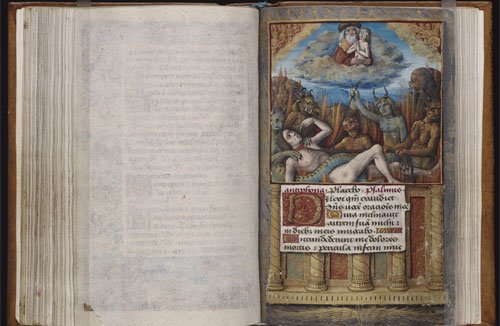 Those looking for an enjoyable scare for the Halloween season are unlikely to seek one out in a European medieval manuscript. Those things are stuffy and deeply religious, right? It would just be silly to look for anything creepy there, wouldn’t it? Not so fast! Lurking inside these pious tomes are a surprising selection of terrors in a sufficiently wide variety to satisfy the average horror movie fan or haunted house aficionado.

The first and best place to look for your recommended dose of medieval-inspired Halloween spirit is the Office of the Dead. A series of prayers for the souls of the deceased, the Office of the Dead can be found in collections of prayers called books of hours.1 It may also be included in another, related type of devotional book – the Psalter. Since the Office of the Dead was performed at funerals, depictions of the various stages of Christian funerary services – last rites, the funeral mass, the burial, and praying mourners or clergymen– frequently accompanied these prayers in illuminated manuscripts. While such scenes included more than a few unsentimental and un-idealized images of the dead, they were otherwise relatively innocuous, but many other common illustrations could be quite the opposite. Skulls, skeletons, re-animated corpses, grim reapers, and apocalyptic horsemen all made frequent appearances, sometimes rising from the grave or terrorizing the living with weapons in hand. A scene from a mid-fifteenth-century French book of hours shows angels and a demon battling for the soul of a dead man lying in an open grave. Not only are these illustrations thematically horrifying, but their depictions of decaying flesh can be quite vivid and gruesome in their own imaginative way despite medieval art’s lack of emphasis on naturalistic representation.

These images can be as bizarre and confusing as they are disturbing. In the Office of the Dead section of the early-fifteenth century French manuscript Les Belles Heures of Jean de Berry, two skeletons lie together in a single grave with three praying monks around them. This weird image still defies explanation.2 In other cases, illustrations are derived from known sources. The ancient legend of the Three Living and Three Dead, in which three living men encounter a trio of dead souls and are forced to re-consider their live choices when confronted with their own mortality, appears frequently. This basic story is represented quite differently in various manuscripts, from a basic three human figures and three skeletons to violent chases and battles between the two groups.3

Medieval artists rarely shied away from representing hell, purgatory, and the torments of damned souls. If you don’t believe me, check out the Last Judgment images carved above the entry doors of many medieval churches. The Office of the Dead in the mid-fifteenth century Dutch Hours of Catherine of Cleves opens with a truly horrifying image of a gigantic demon mouth swallowing up the damned within a dark and stormy landscape. Scenes of the Last Judgment in Books of Hours and manuscripts of the Revelation, called Apocalypses, frequently juxtaposed beatific images of Heaven with representations of the fire, brimstone, and demons of hell.4 Illustrations of the Harrowing of Hell and other such Biblical scenes can be found in several types of manuscripts and have been known to have some pretty horrifying images as well. 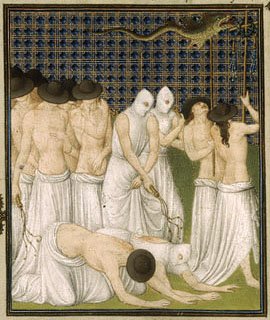 Finally, Christian tradition is full of violent and gory stories, particularly about the unfortunate ends of its many martyrs. Illustrations of such tales often accompanied prayers to individual saints called Suffrages; they could be truly disturbing. The unflinching depictions of torture, decapitations, flagellation, evisceration, burnings, and wild beast attacks involved copious amounts of blood and a surprising degree of detail.5 Image like this one of 3rd century French martyr Saint Denis with his head severed off are actually among the more mild to appear in Suffrages. With books like these, who needs horror movies?

Alexandra Kiely is a twenty-something writer, researcher, and art historian from the United States. She loves reading, figure skating, ballroom dance, and art  especially gargoyles. Visit Alexandra on her website Writer to the Arts (alexandrakiely.com) and blog A Scholarly Skater (ascholarlyskater.wordpress.com)