As is often want to happen, the Sunday paper had arrived with a literary supplement. The supplement in question was entitled “Poems that make Grown Men Cry” and upon glancing the title my friend Alison immediately thought of me. After several years of friendship Alison was all too aware of my adept ability to quite spontaneously break down into a sodden mush of emotions while seconds before seem entirely cordial. This had occurred once when she accompanied me to see The Dark Knight Rises. At the film’s close the somewhat disconcerted woman sitting to my left looked over my heaving body (I had at this point become entirely overrun with emotions and an unbearable love of Batman ) and discreetly asked Alison if I was in need of assistance to which Alison simply replied “Oh no, he’s fine. He actually does this quite often.” Spurred on by first hand experience of my penchant for teary eyed fanaticism, and aware of my passing interest in poetry, Alison passed the literary supplement on to me. It was within the pages of “Poems that make Grown Men Cry” that I was to discover Peter Porter and his poem An Exequy. 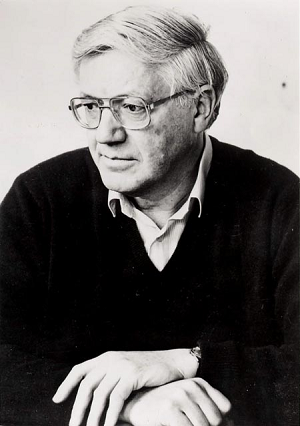 Peter Porter was born in Melbourne, Australia but emigrated to England 1951 where he spent the majority of his life. Before reading An Exequy I had no idea who Peter Porter was. Like most people I have my favourite poets, and my favourite writers, and so to stumble upon something or someone that you instantly relate/react/respond to in an unexpected way is a rare and surprising experience. As soon as I’d read An Exequy I knew that Porter’s words would be etched into the bark of my mind for the rest of life. You can find the poem here. Have a read of it and then come back to me.

In An Exequy Porter deals with the suicide of his wife, their marriage, and the grief and helplessness he experiences in the wake of her death. It’s not an easy topic by any means but I think while reading the poem it becomes evident that Porter is using the writing as a way of exorcising his grief. There’s no denying the emotive weight of the poem but Porter never strays into overly sentimental lyrics or cliché grandiose exclamations of loss and love. What makes An Exequy so poignant is Porter’s restraint, his poetic refinement in the wake of such all-encompassing loss. While the sentiment is similar, this is not W.H. Auden. Or Four Weddings and a Funeral for that matter.

There are two passages from the poem in particular which always stand out in my mind. I think they capture the essence of the poem, the weighty emotions with which it deals, and the clarity of Porter’s voice within his writing. The first passage reads;

A map of loss, some posted cards, The living house reduced to shards, The abstract hell of memory, The pointlessness of poetry –

A lot of contemporary poets eschew rhyme, having said that a lot of contemporary poets are also shite. Porter wraps himself around a really tight rhyming scheme using couplets in iambic tetrameter, as Henry James did in The Exequy upon which this poem is based. In adhering to the strict structure Porter displays his technical proficiency but rather than allowing this formalism to choke his voice Porter brings a conversational style to it and his grief, his self-deprecation, and his poem flow readily from this fact. The profound loss Porter experiences is captured in the particular details of life which summon the memory of his wife to him unbidden. The last line is a favourite of mine, Porter illustrating how pointless he feels his entire poetic endeavour is, giving the poem a really tragic dimension. The point is greatly enforced by the end rhyme which delivers the sentiment like a punch straight up in the feels.

In the second passage we see Porter,

I think this is poetry at its best. Porter utilizes familiar and domestic imagery but more than that he’s employing language to convey ideas and create sensations which are impossible to articulate. There is no actual or literal time between dawn and despair but the words themselves, the connotations of hope and redemption which dawn brings, and the notion of despair as black as the night before, captures how Porter imagines his wife must have felt, her own hopeless in her final moments.

It’s poetry because it finds a way to articulate an experience that is impossible to understand outside of itself, that can’t be known unless it’s lived, but manages it by alluding to what is known and familiar giving us a brief glimpse, stretching the limits of how language can be used, and in the process it becomes something entirely special and unique in and of itself.

It’s poetry because it finds a way to articulate an experience that is impossible to understand outside of itself, that can’t be known unless it’s lived, but manages it by alluding to what is known and familiar giving us a brief glimpse, stretching the limits of how language can be used, and in the process it becomes something entirely special and unique in and of itself. The words, their order and arrangement, are uniquely their own and to change or alter them, to summarise their meaning, is to detract from them; it cannot be said any other way. That is poetry.

An Exequy has all the technical credentials to occupy academics but what is far more readily immediate in the poem is the heartfelt sense of loss which Porter conveys. The poem works as a celebration of his marriage, the holidays, the shared love of culture, the memories that alone belong to the participants, and in celebrating these details Porter illustrates exactly what has been lost. Porter’s conversational style and tone detail his grief with a startling emotional clarity that is never cloying or overly sentimental.

Of course when I read the poem for the first time I was somewhat misty eyed. Whether or not full blown tears graced the pages which I was reading is a secretive detail which I shall take to my grave, for fear the truth would allow Alison any degree of smug satisfaction. What I love so much about An Exequy is that after months of living with the knowledge of it in my head whenever I come back to it, it never fails to illicit the original reaction.

International Space University: How to become an Astronaut