Seoul is a city of landmarks. With a population of over ten million people you’d expect this, but few of these landmarks are older than 100 years, let alone fifty, and only one of these was designed by an Irishman.

On the city’s north side of the river, nestled between a dense field of multi-storeyed and low-lying buildings, seemingly flung about haphazardly, a long straight street runs west to east, slicing a neat sort of order. This modern thoroughfare is one of Seoul’s first attempts at town planning which stretches from the city’s famous Gwangwhamun to bustling Dongdaemun; both old city gates. There is very little indication along here that any history exists pre 1953, except for about a quarter of the way down where, unusual for Seoul, there is a park.

This small modern-styled park was first planned and then designed by Irishman John McLeavey-Brown. McLeavey-Brown, who was originally from Lisburn in County Antrim arrived in Seoul by way of China in 1893 as the Financial Advisor and Chief Commissioner of Customs to the then Emperor Kojong.

John McLeavey-Brown soon established a firm grip on his position, and developed a reputation as a man who accepted no quarter in matters financial. His reputation was both heightened by the fact that he tidied up the empire’s financial irregularities, and blighted by his dislike for cronyism in a country where it was so rife, Ireland a hundred years later would have looked like a puritan pleasure dome of equality and high morals.

Not long after his arrival in Seoul, the Emperor Kojong was concerned over an old Buddhist monastery site which had deteriorated into a slum following its destruction some several hundred years before. McLeavey-Brown suggested building a modern city park, a concept alien to Korea at the time. Seoul, which was undergoing massive changes with modernisation and influences from western and Japanese imperial interests encroaching on the country for the first time, seemed ripe for such a revamp, and the Emperor assented to the plan.

Unfortunately for McLeavey-Brown, he did not manage to see the completion of his park. In 1905 he was recalled to China when Japanese superiority in the region overstretched its influence. By 1913 the park had been completed, three years after Japan had annexed the peninsula, leading to a series of events over the next fifty years which undoubtedly were the darkest years for what was once known as the ‘Hermit Kingdom’.

Today the park still stands in the centre of the city. It is small, square, and because it is closed off by a wall and traditionally modelled gate, it is quite secluded. Inside is a small green oasis of pine trees, flowers, benches, and historic artefacts, mostly from the original Buddhist temple called Wongak-sa. It is non-descript and many who pass it do not pay much attention to it.

A majority of visitors to the city are undoubtedly familiar with its location, on the corner where Jong-ro is intersected with the street leading up towards Insadong, a popular traditionally-themed street full of ceramics retailers, art galleries, and tea shops. On one side of this cross roads the throng of people is unceasing, on the park’s side less so.

Inside the park is quiet, and mostly visited by elderly men who use its space to socialise on the long warm days that stretch from April to October. It is a wonder do they know that this small space in such a massive city is indeed the true Irish landmark in Seoul? 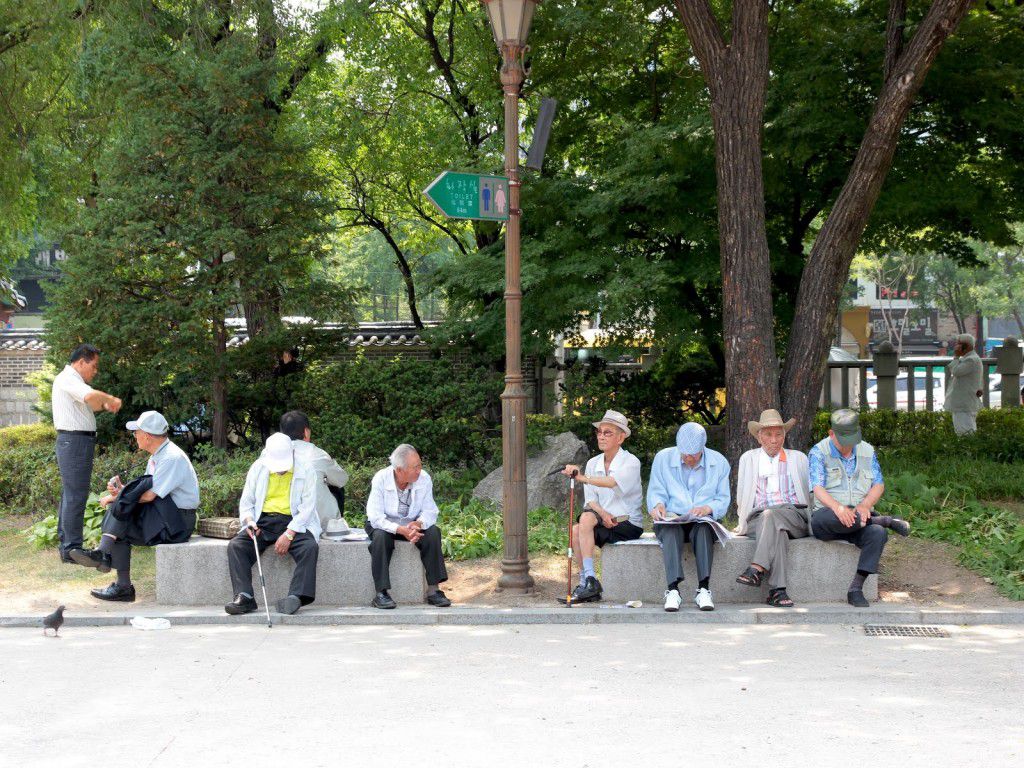 As an aside to this, in 1919 the park became the location where the March 1st Independence Movement began against Japanese hegemony in Korea. Perhaps there is some irony here, as at the time Irish Republicans were preparing to escalate their own struggle for independence against the British. Today, aside from the few original temple monuments, statues celebrating this movement are litterd about the grounds. In Seoul, March 1st is a public holiday where the park becomes the centre of attention with rallies and remembrance, before it sneaks the back into silent obscurity next day.

Conor O'Reilly is an EFL Teacher, blogger, writer, amatuer photographer, coffee drinker, dad, and day dreamer who is based in Suwon, South Korea. He contributes regularly to the English language media in Korea, and previously was the Chairman of the Irish Association of Korea. He blogs at ifihadaminutetospare.com, tweets from @ConzieSays, and leaves photos from his various adventures on flickr.

Nature Vs Nurture – Does it Matter?

Everything For Everyone, Nothing For Us | A Brief History of the Zapatistas