Subscribe to our newsletter
Historic Days of the MonthIrish History

January – you start the year off fine. And in the inaugural month under the Gregorian calendar, there’s plenty of history, with the unavoidable temptation to start new things on New Year’s Day. January has also been, since  1937, the month for the inauguration of the American president, every four years, two months after the election.

Here’s a small selection of the events that we know took place in the month named after Janus, the Roman god of the doorway:

On January the first …

1863: President Abraham Lincoln made the Emancipation Proclamation, which freed slaves in the states rebelling against the Union.

1892: Ellis Island in New York Harbour opened. Over 20 million new arrivals to America were processed before it was closed in 1954.

1959: Fidel Castro seized power in Cuba after leading a revolution that drove out dictator Fulgencio Batista. Castro then established a Communist state.

and also, on other days of the month

January 2nd, 1981: The Yorkshire Ripper, Peter Sutcliffe, arrested (below). Sutcliffe murdered and mutilated 13 women between 1975 and 1980, far more than his namesake Jack the Ripper. The search for the killer took five years. He was eventually caught by accident at a police checkpoint, having been interviewed nine times previously and released. 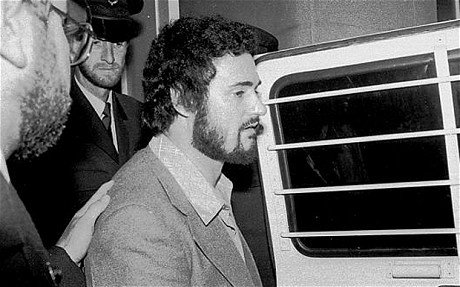 10th, 1922: Arthur Griffith was elected first president of the Irish Free State, as it was then known.

11th, 1964: The U.S. Surgeon General declared that cigarettes could be hazardous to health.

20th, 1996: Yasser Arafat became the first democratically-elected president of the Palestinian people, with 88% of a popular vote.

24th, 1965: Winston Churchill died at the age of 91. He had been Britain’s prime minister in World War 2, whose courageous leadership and defiant rhetoric had fortified the British during their long struggle, including the suffering of the Blitz. “I have nothing to offer but blood, toil, tears, and sweat,” he famously said upon becoming prime minister.

25th, 1533: England’s King Henry VIII married Anne Boleyn, in defiance of Pope Clement who had refused to annul the royal first marriage, to Catherine of Aragon.

Birthday of the Month: Jeanne d’Arc

After a series of mystic visitations by saints, she inspired French troops to break the British siege at Orleans and win several important victories during the Hundred Years’ War (1337-1453) between France and Britain. She was eventually captured and sold to the British, who tried her for heresy and burned her at the stake when she was only 19. In 1920, Joan of Arc was canonised by the Roman Catholic Church.

Angela Long is a journalist and media consultant with over 30 years experience in the worlds leading media organisations. She has extensive experience as a news editor, feature writer, reporter, production editor and broadcaster. A native of Melbourne, Australia, Angela studied journalism at Melbourne Technical University (RMIT) before living in the US, England, Spain, and Ireland. Her staff positions include 10 years at The Irish Times, five at The Sunday Times, two with the BBC World Service.
Journalism is the first draft of history. Angela describes herself as a lifelong history head, thanks to her fathers reminiscences and Northcote Library. For contributors, she is particularly fond of the neat historical entrée of the anniversary, centenary, and so on.

The Power To Power Ourselves

In English Dungeons | The Death of Sergeant Charles M’Carthy

Back to the Garden | Reflecting on Woodstock at 50