The Lady Vanishes: The Theft Of The Mona Lisa 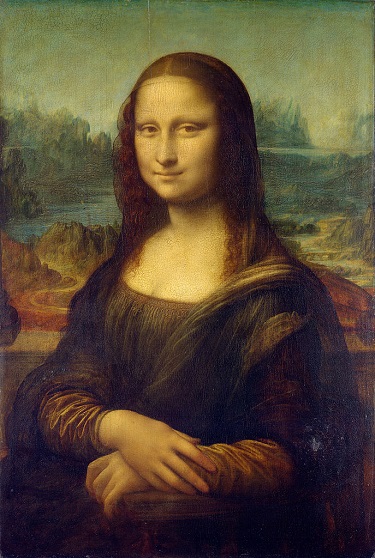 Nowadays the Mona Lisa needs no introduction – it’s the most famous painting in the world, after all. Over six million people a year visit the Louvre in Paris to see La Gioconda – the Happy Woman. That name for the painting is actually a pun, as it’s a portrait of a Florentine merchant’s wife named Lisa del Gioconda. It was commissioned five hundred years ago from the master painter Leonardo da Vinci to celebrate the birth of her second son. Leonardo being Leonardo, he never actually finished the painting to his satisfaction, so the del Giacondas never got it. Instead it went with him to the court of King Francis I, and from there into the French state collection. But even unfinished, it was a revolutionary work of art in its time. The perspective on the the background was groundbreaking, while the use of shading on the face to accentuate the expression was almost immediately copied by every other artist working at the time. The Mona Lisa was thus considered a hugely important painting. But though it was well known to students of art history and was a source of some pride to the citizens of Paris, back in the 19th century it was far from the international icon it is today. How did it become the most famous painting in the world? That story begins on a Sunday evening in the August of 1911.

Sunday the 20th August seemed to the staff of the Louvre just another day like any other. On Monday 21st, the museum was closed to the public as it was every Monday, while general maintenance and cleaning was carried out. Nobody noticed the man in the same white smock as every other staff member who took the Mona Lisa down off the wall. Paintings were taken down for cleaning or photographing all the time, after all. Nobody suspected that he was actually an impostor who had hidden in a cupboard the night before at closing time, and come out when everyone else arrived in the morning. In fact, when he found one door locked on his way out and took off the doorknob to try and unlock it, a passing workman not only believed his story about finding the door broken but put it back together and unlocked it for him. By the time he reached the street the Mona Lisa was wrapped in his smock – just a man with an anonymous white parcel who vanished into the crowd.

It wasn’t until the morning of the 22nd of August that anybody noticed anything amiss. A painter who had been visiting the Louvre to paint the main exhibition hall noticed the “Mona Lisa” was missing and asked a guard when it would be brought back. The guard went to find out, only for his questions to set off a maelstrom of confusion that soon spiralled into panic. Soon the news burst out of the museum and onto the streets of Paris. La Giocanda was gone.

The public were at such a fever pitch of excitement that two German artists were attacked by a mob and then arrested simply for being foreign and carrying canvases. Soon the disappearance was world wide news – even if some papers weren’t quite sure what the Mona Lisa looked like. For example the Washington Post instead published a picture of the Mona Vanna, a painting by da Vinci’s pupil Salai sometimes known as “the nude Mona Lisa”. Still, they soon found out what she looked liked. Everyone found out what she looked like. Soon the whole world knew about the lady with the mysterious smile. She was everywhere – on every newsstand – and yet she was nowhere.

The artist Pablo Picasso wasn’t in Paris in 1911. He was abroad working on the paintings that would later become known as his “African period”, after the first such painting he’d done in that style, Les Demoiselles D’Avignon, had provoked mockery and ridicule in Paris. The influence for the paintings wasn’t just African art though – Picasso had also been inspired by two primitive Spanish sculptures he’d been sold by a friend named Guillaume Apollinaire. He was therefore a bit shocked when he read an anonymous letter published in a Paris magazine boasting that the theft of the Mona Lisa was no big deal – the writer had stoled two Spanish statues from there years ago and nobody had noticed. [1] Picasso immediately realised these were the same two statues sitting on a table in his studio in Paris. He headed back to Paris in a panic, where he met Guillame. The letter had been written by a former house guest of Guillame’s named Gery Pieret, and Guillame had already packed him onto a train out of the country. The two men decided to return the statues anonymously, but not quite anonymously enough as Guillame was arrested. He wound up serving six months in jail – a little harsh, and probably motivated by frustration that he had nothing to do with the theft of the Mona Lisa.

As time went on and the theft remained unsolved, it quickly incorporated into popular culture. One such incorporation was a story about the “International Society of Infallible Detectives” – the first ever superhero team, assembled by the American writer Carolyn Wells. Holmes, Poirot, Raffles, Dupin, Philip Trent, Professor Van Dusen and several other fictional detectives were assembled to solve this unsolvable crime. Unable to work together, they then split up to solve it individually and each recover a separate Mona Lisa, leaving them with a stack of dozens of Mona Lisas. This left them with only one conundrum – which one was the real Mona Lisa?

It wasn’t until two years later that the Mona Lisa actually reappeared, back where it had first been created – Florence, Italy. In November of 1913 an anonymous offer was made to an art dealer in Florence to sell him the Mona Lisa. He went to a friend named Giovanni Poggi who was the curator of the Uffizi Gallery. Together they made an offer to the thief to buy the painting, inspected it and verified it was genuine. Then they tricked the thief into letting them take it away before they called the police.

The thief turned out to be an Italian carpenter named Vincenzo Perugia, who had worked in the Louvre some time before the theft. Vincenzo had actually been one of the suspects the police interviewed and exonerated, and they’d even searched his apartment while the Mona Lisa was hidden in it and not found it. Vincenzo claimed that he had been motivated by patriotism, and was upset that a great Italian masterpiece was held in France. That’s slightly undercut by the fact that it was Leonardo who brought the painting to France, and that Vincenzo had tried to sell it in London before he went to Florence, but the story became popular enough that it turned him into a celebrity in Italy and ensured that he wound up only spending seven months in jail, and wasn’t extradited to France.

Though some in Italy wanted to keep the painting in compensation for works looted by Napoleon the previous century, most agreed that it should go back to France. So the lady returned to Paris. In fact, the whole thing led to a great deal of friendly feeling between the two countries – the French were deeply appreciative of Italy’s gesture, and there was a lot of back and forth pleasantries and declarations of brotherhood. In fact, this is considered to by one of the main reasons that Italy joined World War I on France’s side a few years later. In any case, the painting returned to the Louvre, the security received a major upgrade, and that was the end of the story. Or was it?

For years it was rumored that the Mona Lisa that had been recovered was a forgery, and that the real Mona Lisa was still in the wind. The most famous version of this was a story by a reporter named Karl Decker. In 1932 he claimed that it was a South American criminal mastermind nicknamed the Marquis de Valfierno – “the Marquis of the Vale of Hell” – who had masterminded the theft. He had been running a forgery ring at the time, and his plan was to commit the ultimate coup. Steal the Mona Lisa, and then sell six copies of it to six separate American millionaires. No risk of getting caught moving the painting – the forgeries were in America before the painting was even stolen. And no risk of the millionaires incriminating themselves either. (Rumour has it one was William Randolph Hearst, who we’ve written about before.) The original had been hidden, until it was unearthed by Vincenzo (who had been paid to steal it originally) so that he could sell it.

In truth, may not really matter if the Mona Lisa in the Louvre is real or not. A fair proportion of the six million tourists who come to see it every year aren’t really coming to see a painting. They’re there for the legend, for the idea of the “world’s most famous painting”. Though perhaps that’s not really being fair. The Mona Lisa has always been revered for a reason, and it’s hard to look at that enigmatic smile and not think that perhaps the Lady deserves her crown after all.

Images via wikimedia except where stated.

[1] Ironically pre-Roman Spanish art is so rare that those two statues might be more valuable than the Mona Lisa.

Charlottesville, and How To Support Marginalised Communities Wherever You Are In The World