Disney Studios At War – the story of how Donald Duck became a Sgt. 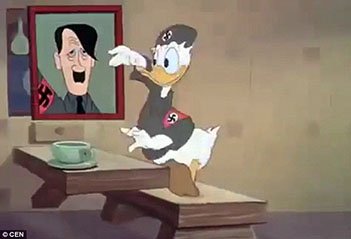 At the beginning of the 1940’s Walt Disney Studios were in distress; plummeting from the success they enjoyed after Snow White and the Seven Dwarves. Instead the studios were blighted by financial difficulties and a poorly implemented management structure; a strike was becoming inevitable. Critically acclaimed and cherished for bringing feature length animation to the big screen; Disney Studios were on the brink of ruin.

It’s this backdrop that makes the CIAA’s enthusiasm to have Walt Disney participate in the ‘Good Neighbour Program’ all that more surprising. The CIAA was a newly formed branch of the US Government – the Office of the Coordinator of Inter-American Affairs and formed to strengthen the relationship between the US and South American countries. In particular the US found themselves concerned about the progress the Nazi’s had made in those countries in the 1930’s.

With so much importance placed on the ‘Good Neighbour’ program what was the motivation behind gambling taxpayer’s money on an animation studio who did not have the finances and may not have had the staff to produce the 12 animated shorts required? As Theodore Thomas, son of legendary Disney animator Frank Thomas put it: “The finances of the film were the typical ‘go get a loan at the bank’ but the bank was kind of wary of Disney having such a huge debt and then going off to make films about Latin America. The Rockefeller agency [of the CIAA] said not to worry, if the films don’t make back their budget we will guarantee the loan of the banks.”

In the summer of 1941 Walt Disney and 18 of his animators were invited on an all expenses paid 12-week trip through South America. Walt was most looking forward to uncovering “new songs, dances, plots and personalities for our cartoons.” They held animation workshops, invited local artists to collaborate with them and captured the essence of life in those countries. The trip was not without it’s own problems, as historian J.B. Kaufman notes, “everywhere [Walt] went, there was some opposition, because the Nazi power base that was trying to get established in South America knew he was coming. They were prepared to attack [and] there had been some advance hostilities from the labor community because of the strike.”

But “the opposition was swept away because the people were dying to meet Walt Disney. They were crazy about the films he was making. He became kind of a rock star.” So, not only did the Government get their 12 animated pieces – two of which were roaring commercial successes – their gamble paid off splendidly. 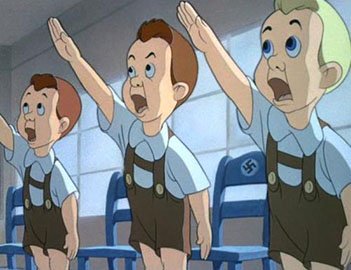 After Disney’s struggle to bring animation to the big screen with Snow White and the Seven Dwarves he became a beacon of idyllic American family culture. Any subversive material in his war propaganda would be taken as an affront to those ideals he appealed to in films like Snow White, Pinocchio and Bambi. Unsurprisingly, the war propaganda produced by Disney was more affecting than that produced by Warner Brothers or MGM. These rival studios had already been introducing subversive traits to their work: the shock of war was less resounding in the worlds of Bugs Bunny and Tom & Jerry.

It was this power of innocence that the Department of Defense wanted to harness when they commandeered Disney Studios. Walt at first resented the war, he felt it would curtail his output and compromise his market. However, once commandeered, he poured his efforts into adapting his studio and staff to better produce the training animated shorts, leaflets, graphic design and numerous insignias produced for the Department of Defense. In fact Disney studios produced five times the meter of film during the war years than they ever have at peace. It was the lifeboat the studio had needed.

The crowning achievements of Disney’s war effort were the two propaganda pieces: Der Fuehrer’s Face which depicts Donald’s nightmare stint in Nazi Germany and Education for Death – The Making of A Naziwhich makes a moralistic meal of the brainwashing of young Germans under the Nazi regime. Though they are spectacular examples of animation in their own right they make for uncomfortable viewing. 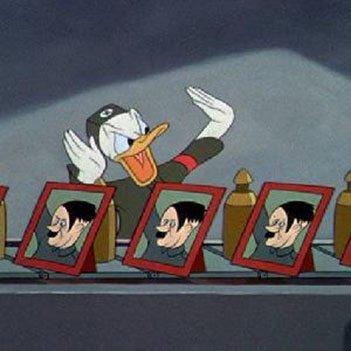 They contain shrewd and damaging cultural references and xenophobic depictions of other nationalities. The mimicking of Triumph of the Will is eerie and the misinformation crude. The pieces are savage and brazen and leave no doubt of the venomous moral frenzy the government employed Disney to whip up and mobilise a nation at war.

Their success as propaganda pieces is easily measured in their uneasy legacy. Only a few years after their production, in 1947, standing trial before the House of Un-American Activities Committee, Walt Disney recalls their production with distaste:

“During the war we thought it was a different thing. It was the first time we ever allowed anything like that to go in the films. We watch so that nothing gets into the films that would be harmful in any way to any group or any country. We have large audiences of children and different groups, and we try to keep them as free from anything that would offend anybody as possible. We work hard to see that nothing of that sort creeps in.”

The pieces are also no longer allowed to be viewed by researchers and will never be aired on TV; Walt Disney very much sought to distance the studio from the propaganda when the US returned to peace. However in 1943 Der Fuehrer’s Face was awarded an Oscar, the only Donald Duck film to do so, and in 1984, for his 50th birthday and in honour of his wartime service, Donald Duck was simultaneously promoted to the rank of sergeant and discharged from service. To this day both Der Fuehrer’s Face and Education for Death are considered masterpieces of their craft and they remain a startling reminder of the powerful sway propaganda has over mob mentality.

Wave of the Future | A Look at Water in Animation